Rogue Spear isn't a bad game, and it makes do with what it has going for it.

Rogue Spear, the sequel to Rainbow Six, originally made its debut on the PC in 1999 and since then has reared its head on the Dreamcast. Now, the well-known squad game based on Tom Clancy's vision of a militant future is headed for your PlayStation.

The game begins with a brief introduction to the story and gameworld: the USSR has collapsed, and chaos has erupted in the eastern hemisphere. Spawning from this lack of leadership are a large number of power-hungry groups, armed to the teeth with weapons of the old government and an intense desire for power and money. The Western world, wanting to keep this mess outside of its borders, looks to specially trained groups of soldiers--called Rainbows--to protect them. At this time, a new militant group, led by a mysterious man armed with a weapon of mass destruction, steps onto the stage, and it's up to you and your group of soldiers to save the world from their malicious plans.

Rogue Spear sports a high level of customization, letting you handpick your men from a total of 30 characters. These soldiers are separated into specialized groups, which include recon, assault, electronics, demolitions experts, and snipers. This will let you assemble a well-balanced group that's geared toward each unique mission and will provide you with multiple methods of attack. You're also able to customize characters further by selecting their clothing, as well as their primary and secondary weapons and a few items, such as flash grenades and lock picks.

Like previous versions, the game is separated into two portions: planning and execution. In the planning portion of each mission, you're given time to put the aforementioned customizations to good use, as well as taking a look at intelligence reports and blueprints for each mission. In doing this, you're given the chance to examine every detail of the mission ahead and plan accordingly. You can stick with the default plan, which is presented to you by your intelligence officers, or you can take alternate routes of your own design.

Once the mission starts, you're given control of one character in this squad. If this character is shot and killed, you'll see a short cutscene from the perspective of your killer before you leap into the body of the nearest team member. The control of the game is a little touchy, so it takes some getting used to. This will provide you with some frustration at first, since the damage in the game aims for realism and since you'll be killed by one bullet in most cases. The game progresses at a slow and deliberate pace, one that might leave some looking to drum up more action.

The graphics are middle of the road, with nothing spectacular in terms of polygon count or color use. The textures are fairly rough, but the level design is intuitive and well laid out, so this makes up for the lack of visual flair. The sound is sparse: It's made up of mostly the tapping of boot heels peppered with short bursts of gunfire and the occasional yell of hostages or radio chatter. The music ducks and weaves through all of this and is triggered when you reach certain points in the level or are spotted by the enemy. The transition between the music and silence is a rough one, though, and it grabs your attention when this happens--as a skipping CD might do--since the music is literally chopped off as you enter a new room or encounter a new enemy.

After all is said and done, Rogue Spear isn't a bad game, and it makes do with what it has going for it. Those PlayStation owners out there who have been dying for a good squad-based game would do well to take a look, as the single-player game is quite in depth. But if you're looking for something action-oriented or flashy, you may end up disappointed. 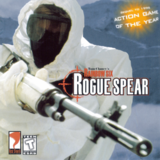