Unfortunately, Rocky is completely spoiled by a few major problems.

It's been more than 25 years since the Academy Award-winning film Rocky was first released, and whether you find it odd or not, we now have a brand-new game based on the timeless film series. Unfortunately for fans of the film franchise and boxing games in general, Rocky doesn't do justice to the films or the boxing genre.

Rocky includes several modes of play, including exhibition, movie, sparring, and knockout tournament. The movie mode is the game's main single-player offering, and it starts you out as Rocky Balboa from the first film and allows you to progress through the story line of the entire five-movie franchise. Exhibition mode lets you square off against a computer opponent or a friend in a match that's just for fun. Sparring mode gives you a chance to practice your moves and combinations against a computer-controlled sparring partner. Finally, knockout tournament mode opens up once you've completed the game's movie mode and gives you the ability to set up a tournament for up to 16 players. You can use any of the game's fighters in any of the modes once they are unlocked in the game's movie mode, which is broken up into five segments that represent each one of the Rocky films. Each segment sets you up to fight four bouts, three against obscure fighters and one against the starring champion or challenger featured in that film. The Rocky and Rocky II segments have you going up against Apollo Creed, the Rocky III segment pits you against Clubber Lang, the Rocky IV segment throws you into the ring with Ivan Drago, and the Rocky V segment pits you against Tommy Gunn. Once you defeat an opponent, you unlock him as a playable character, and once you clear an entire segment of the movie mode, you unlock that particular version of Rocky as a playable character as well. Unlocking the characters, the five CG cinemas, and the knockout tournament is about all that comes with completing the game, which unfortunately doesn't take a great deal of time.

The boxing mechanics and overall control found in Rocky were obviously well thought out, since many of the conventions used are actually based on realistic pugilism. You can throw jabs, straight rights, hooks, and uppercuts, and you can effectively target the body, as well as circle your opponents and work angles. Unfortunately, actually playing the game for a bit of time reveals some of its major problems. The biggest problem is the fact that you can cheat your way to victory a number of different ways, and you'll likely discover these cheats without even trying. The biggest offender in this category is the game's animation, which has a few open frames that let you continually hit an opponent if you time it right. It doesn't always work, but the majority of time you can simply time your punches so they land just as your opponent is recovering from a previous punch. This isn't the only cheap thing that the computer lets you get away with, and even in a two player match, a skilled player can take advantage of the game's problems to win easily. Two-player battles simply boil down to who can pull off the cheap tactics faster and better. When you're not in the ring, you can try your hand at one of the training minigames, which are almost identical to the ones featured in the Ready 2 Rumble series. Basically, all the games are rhythm-game-style button-timing exercises that give you attribute points based on how well you do.

Visually, Rocky doesn't look very good at all. The character models are simple and overly exaggerated, and they feature slightly oversized heads. The animation of the fighters is fairly decent, but the collision detection is a bit off, and sometimes the reaction animation of a fighter being hit is way off. The crowd animations are canned and fairly poor--portions of the crowd seem to spend the entire fight looking away from the ring, since the crowd appears to be tied to the rotation of the ring as the camera moves with the fighters.

In the audio department, Rocky features many elements, like music and dialogue, that were taken directly from the movies. The Rocky theme plays every time Rocky enters or exits the ring, music from the movie plays during the game's opening sequence, and dialogue excerpts from the movie are used during the cutscenes. The sound effects for the punches and the fighters grunting and groaning are all well done and also sound like what you hear during the fight sequences from the Rocky films.

In the end, Rocky is completely spoiled by a few major problems, the worst of which makes it possible to get by opponents using only one button. Some punches work better than others, but ultimately once you've discovered them you're never really in any danger of losing a bout, since you can always just keep hitting your opponent on the edge of his recovery animation. This problem is compounded by the fact that beyond 20 matches and five cinema sequences, the game really doesn't offer a whole lot for boxing fans or Rocky fans. If you're still curious, rent the game, see everything there is to see, and then return it. 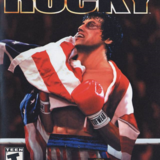 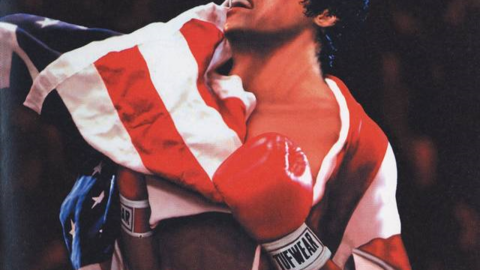 Unfortunately, Rocky is completely spoiled by a few major problems.