Forget plastic axes; this guitar game is the real deal.

With the oversaturated and ailing rhythm game genre in a state of decline, it seems ill-timed to launch a new guitar-focused music franchise. But Ubisoft has pulled one out of left field with Rocksmith--a guitar game that successfully bridges the gap between musical gaming and actual rocking. It's advanced enough to give seasoned guitar players a more realistic challenge than Rock Band or Guitar Hero, yet accessible enough to teach inexperienced guitarists the ropes of rock and roll.

There are a few minor hurdles to get through before you get rocking. Rocksmith requires you to own an actual six-string electric guitar and won't work with any old plastic peripherals you have lying around. It's a great excuse to dust off the old axe if you have one, but the high cost of picking up the Epiphone bundle or a separate guitar will be prohibitive for some players. That said, wielding an honest-to-goodness instrument of rock is what makes this game so fun. Once you have the requisite guitar in hand, you plug it into your system using the included 1/4-inch adapter cable, but it takes some fiddling to get a comfortable response time between the visual and audio lag. Running the sound out via analog audio cables into a stereo offers the best performance, though there are a few different options to explore. Once you get that mess sorted out, it's time to melt faces. Well, eventually.

Rocksmith's light campaign mode eases you into tunes by having you practice small groups of songs to get a feel for them before playing the more advanced versions back-to-back in concert at packed venues. It starts you off at the ground floor with simple licks, single notes, and slow pacing to get you accustomed to the basics of guitar playing and how to decipher the elaborate note runway. Each guitar string is associated with a different color, and the numbered fretboard onscreen indicates the corresponding location you're supposed to play on the guitar. The gameplay is reasonably lenient, since you can't "fail" mid-song for performing poorly. You may have to replay a tune if you don't reach a certain minimum point score by the end, but repetition is required for learning, and it's a common theme across much of Rocksmith. You're good to go as long as you hit the right notes or chords when prompted when they come down the runway. What's awesome is that you're not docked points for noodling. For folks who already have some level of guitar skill, this is one element that Rock Band and Guitar Hero sorely lacked. Even better: the game scales to your playing ability automatically. If you start nailing power chords instead of single notes, you'll level up the phrasing and soon start seeing chords coming down the screen at you. The reverse happens if you mess up too much, giving you a chance to recover if things get too busy for you. It's a very cool, dynamic system that's forgiving without gutting the challenge.

Earning rock points with each performance unlocks more venues, songs, and bonus content. As you increase your rank and playing skills, the game gradually ramps up in complexity to add in full chords, solos, and eventually, note-for-note phrasing. There's a great mix of songs, and most of the 50-plus tunes have several different versions that feature single notes, full chords, and the more advanced combo arrangements. While the track listing is geared more toward jams with familiar licks and catchy hooks than current top-40 popularity, there's a solid spread here. You'll find classic rock hits from Cream, The Rolling Stones, and Tom Petty, alongside Nirvana, The Cure, The Black Keys, and more recent groups. New tunes also introduce more advanced guitar-playing techniques, which are accompanied by detailed video explanations, practice challenges, and tutorial help. The extra level of handholding is optional, but it's there if you need the support or the additional practice. Arcade-style minigames present a really fun option for continuing to hone specific skills while taking a break from the straight-up rocking, and the way Rocksmith goes above and beyond to offer you so many different ways to learn new guitar tricks and improve your ability is impressive. Some activities are more enjoyable than others, yet there's a broad toolbox to draw from for players learning the guitar for the first time.

Every note, chord, pick scrape, or sound you make is played through the game in real time, and it's amazing how Rocksmith essentially turns your TV or stereo into an amplifier. Thankfully, there's a built-in tuner you can access from the menu, and you're prompted to check your tuning between songs. Reverb and distortion are added to your guitar's sound on a song-by-song basis too, but you also unlock different amps, effects pedals, and guitars to fiddle around with in the game's absorbing sandbox-style amp mode. Here you can customize your guitar sound with tons of different layers of tones and effects. It's easy to spend hours testing all the sounds out and free-form jamming through the TV.

For everything Rocksmith does right in terms of delivering an authentic guitar-playing experience married with enjoyable gameplay, it's still lacking in some areas. Compared to other rhythm games, the presentation is far less flashy or interesting. While that makes sense, given the focus is on playing a real guitar instead of hitting just a few colored buttons, it could have used a more upbeat, engaging way to draw you into the experience. Venues are dark, drab spots populated small seas of realistic-looking fans who are equally lacking in personality. The campaign structure itself feels pretty weak too. There are a lot of tunes to rock through and some great content to unlock, yet there's precious little about the experience that makes you feel like you're rocking out onstage or making real progress through your virtual career.

There's definitely room for improvement down the road, but Rocksmith's debut has one thing going for it above all else: it's the real deal. This ambitious guitar game delivers on its promise of intense rhythm gaming action tied to the act of actual guitar playing. It has something to offer players of all skill levels, whether you're picking up and learning the guitar for the first time or have been playing for ages. After years of Guitar Hero, Rock Band, and a slew of imitators, it's refreshing to see someone finally make the big leap and succeed. 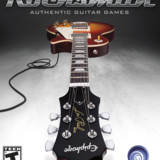