They say old habits die hard, and in the case of the humble guitar player, never has a statement rung so true. We crave guitars that were crafted in the '50s, amplifiers that run on glowing vacuum tubes, and yes, everything being cranked up to 11. So anything that challenges the status quo in the grand world of guitar playing has got its work cut out for it--and in the case of Rocksmith 2014, a learning tool sprinkled with video game tropes, it's very much an uphill battle.

Certainly, getting into Rocksmith's unique way of teaching guitar is going to be a struggle for anyone who has been playing the instrument for a good amount of time, particularly if you're a fan of using guitar tablature. Instead of reading the notes from left to right like in tab, the setup is like a more complex version of the classic Guitar Hero games. A runway of note blocks scroll from the top to the bottom of the screen, each along a path that corresponds to a particular fret number, with colour coding signifying which string to pluck.

With practice, I got used to this setup, but with 12 years of guitar playing and tab-reading habit gnawing at my brain, it was never as comfortable as I'd have liked. Similarly, Rocksmith's default way of teaching isn't going to be for everyone. Rocksmith uses an adaptive difficulty level where the song is played at full speed, but only a few notes are displayed at a time. Nail those notes, and more are added in, until eventually you're playing the whole song.

It sounds like a great idea, and in some cases it works. With simpler songs, such as Foo Fighters' "Everlong" and Muse's "Knights of Cydonia," it's relatively easy to gradually add in more notes as you play, thanks in part to not having to worry about quick position shifts and dense passages. The initial starting notes are well chosen too, with your fretting hand placed in just the right position to add in those extra notes as the difficulty ramps up.

But for more complex songs, the limitations of this system become clear. I could easily play the simple version of Slayer's thrash classic "War Ensemble," but as the extra notes got added in, the difficulty curve wasn't smooth enough to make playing them at full speed on the fly possible. There simply wasn't enough time to process those new notes and physically memorise where my fingers needed to be before notes had flown by and a new passage had started.

In the old Rocksmith, there wasn't much you could do except grin and bear it, but thankfully Rocksmith 2014 introduces a much-improved version of Riff Repeater, which lets you highlight sections of a song and slow them down to a more acceptable pace. You can set up a speed trainer too, so that a section gradually speeds up as it loops, and set the difficulty to whatever you like so you get all those notes at once. This is far more akin to how a guitar player would traditionally practice a difficult riff or solo: learn all the notes, but play them at slow speed and then speed it up.

This new version of Riff Repeater is such a great feature that it's unimaginable to go back to the old Rocksmith and learn songs without it. That said, it can still be a little clumsy, particularly for really complex arrangements where you want to read ahead and get the notes under your fingers and locked in your head before attempting to play them along with the song. The top-to-bottom setup means that not a whole lot of notes can be displayed onscreen at any one time, and you can't simply scrub through to a section you want either. Being able to display whole sections of the song at once in a tab-like fashion would have been a great addition here.

There's a firm line drawn between the silliness of the Guitarcade minigames and the main song-learning modes.

There are times when Rocksmith's note highway trumps the traditional tab, though. Notes that need to be held are displayed as long streams of colour, palm muted notes have an X struck through them, ornaments like vibrato give notes a wavy look, and glissando stretches them out along the fretboard. These are traditionally difficult things to convey via tab, but here they're easy to read at a glance. Plus, if you're not familiar with a given technique in a song, Rocksmith is packed with excellent tutorial videos for beginners that teach you everything from smooth hammer-ons and pull-offs through to squealing pinch harmonics and tapping.

Useful for beginners and seasoned players alike is the Guitarcade, which teaches techniques like string skipping and bends via a range of 8-bit-style minigames. Escaping a chasing police car by playing Phrygian scales in Scale Racer, or shooting cowboys by skipping strings in String Skip Saloon is a lot of fun, and the minigames are genuinely useful for nailing some of the fundamental skills of guitar playing. The only real slipup here is Hurtlin' Hurdles, which asks you to tremolo pick as fast as you can to run down a racetrack, and then mute the string to jump over a hurdle. Unfortunately, the game doesn't respond as quickly as it should, making this mode far more frustrating than fun.

There's a firm line drawn between the silliness of the Guitarcade minigames and the main song-learning modes, with Rocksmith finally embracing the fact that it's a teaching tool above all else. There's no career progression, for example, nor are any of the songs locked behind some arbitrary score wall. This is exactly as it should be. You're free to learn at your own pace, and the game simply makes some recommendations about what lesson or song to tackle next. The fact that you're learning an actual instrument and playing real songs is all the incentive you need to keep going.

Speaking of songs, the lineup here is much improved over the original game, with tracks that have been chosen because of great guitar work, rather than some unnecessary need to slot in a big-name artist. They're also much trickier on the whole, with the likes of Joe Satriani and Iron Maiden pushing your skills to the limit. Beginners are still catered to with artists like Bob Dylan and the Arctic Monkeys, but the emphasis is on melting faces with killer licks, which is frankly what the vast majority of guitar players want to do. You can put those licks to good use in Session mode, which features a virtual band for you to jam with. It's not the best-sounding band in the world, and some of the chosen chord progressions are a little odd to say the least, but if you stick with the 12-bar blues, there's some fun to be had.

Like in last year's game, there are a few technical issues that get in the way of rocking, most notably with the audio setup, which all but requires you to feed audio directly into an amp via analogue cables. Do it any other way, and the lag between your playing and the sound emerging from the speakers is far too distracting for the game to be playable. It's a shame the resultant guitar tones aren't quite worth the effort. Played along with a song, they're not too bad, but in isolation, they sound fizzy and overprocessed. And try as I might to create something more acceptable in the tone designer, I couldn't rig up anything that sounded less artificial.

When I bashed out my first clumsy Green Day chords on guitar, I'd have killed for as good a teacher as this.

These idioscyncrasies aren't enough to sour what really is a great learning tool for beginners, and a big improvement over the original game. The problems that I had with the layout of the note highway are going to be far less of an issue for those without years of tablature indoctrination, and the tutorials and song selections are good enough to teach you a lot about playing guitar. Rocksmith isn't going to be replacing the likes of a keen ear, a copy of Guitar Pro, and a good set of tabs for me, but when I think back to when I bashed out my first clumsy Green Day chords on guitar, I'd have killed for as good a teacher as this.

View Comments (129)
Back To Top
8
Great
About GameSpot Reviews 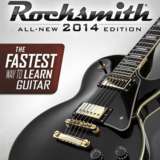 Mark has been playing guitar for the best part of 12 years, during which time he has spent an absurd amount of money collecting instruments, and drove every girlfriend he ever had to insanity with his endless practicing. He regrets nothing.