You say you want a revolution? Be careful what you ask for.

Thanks to its Bemani series of games, Konami was the name in rhythm and music games for many years, especially in Japan. These games include: Dance Dance Revolution, Karaoke Revolution, Guitar Freaks, Drummania, and Beatmania. But times have changed; the genre is now dominated by SingStar, Guitar Hero, and Rock Band. Not content to sit on the sidelines and watch, Konami's response is Rock Revolution. It's too bad that the game, which lets you play guitar, bass, or drums (but not sing), doesn't rock and certainly isn't a revolution.

Rock Revolution can be purchased with a drum kit or as a stand-alone game--there are no game-specific guitars available. Fortunately, it's compatible with both Guitar Hero and Rock Band hardware. This is good because not only are you able to use peripherals you probably already own, but also because the included drum kit, which has six pads and a foot pedal, is lousy. The pads are small and loud, plus the ones in the back are only slightly angled and raised so they're difficult to hit. And, really, having seven inputs is too much for people without bona fide drumming skills. It seems that Konami realized this because you'll go entire songs using just four pads (and sometimes not even touching the pedal for songs at a time) until you get to the hard difficulty setting.

Questionable drums are the least of Rock Revolutions problems, though. The soundtrack includes just over 30 songs--a paltry number when compared to the 80 or so songs in both Guitar Hero World Tour and Rock Band 2. There are tunes from Metallica, Foo Fighters, Ratt, The Ramones, Fall Out Boy, Twisted Sister, Avril Lavigne, and more. This wouldn't be a bad list if not for the fact that all of the songs are covers. Some of them are decent, but the competition uses nothing but master tracks these days, so this ends up being just another way in which Rock Revolution fails to measure up.

Substandard gameplay and an underwhelming Career mode compound Rock Revolution's issues. The Career mode is nothing more than playing a list of songs; there's no way to embark on a career as anything other than a solo act, no character customization, and nobody is playing the paltry online modes. The game can't even get the genre's established gameplay down right. The note highway that displays upcoming notes is vertical and displayed on a 2D plane. As a result, it only shows a few notes at a time, which makes fast sections very difficult because you can't anticipate what's coming next. This problem is further exacerbated by an unusually small window in which to play the correct note, questionable note recognition, note patterns that don't match the music, and stringent requirements for passing songs. Not only is it easy to fail the average song, but frequent additional requirements, such as not playing "poison" notes, achieving a certain score, or passing a song despite the difficulty increasing midtune, also conspire to block your rock.

Rock Revolution's one redeeming mode lets you create your own music by first choosing a style or sound for your instrument and then mapping chords, riffs, or beats to the frets or drum pads. It's highly unlikely you're going to make any sort of masterpiece with the limited tools available; you can't add your created works to the game's set list or share them online, but it is mildly amusing to see what you and a few friends can come up with by mashing fret buttons and banging on the drums.

If Rock Revolution came out two or three years ago, it might have been revolutionary, but in 2008, it's not even relevant. Uninspired presentation, a tiny tracklist that includes no master tracks, a complete lack of vocal support, uninteresting gameplay, and a barebones Career mode are just a few of the many ways in with Rock Revolution fails. In fact, it fails to live up to its name, Konami's past, and, most importantly, the competition. 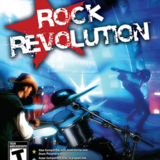