Smart design choices make this handheld debut for the Rock Band series a great one.

If you've ever played a game of the Rock Band ilk, you'll be immediately at home with the gameplay in Unplugged. Colored gems representing notes come down a track toward you, and as they cross a horizontal target in rhythm with the song, you must press the corresponding button or buttons for those gems. By default, the four buttons used are the left and up buttons on the D pad and the triangle and circle buttons, which makes for a comfortable fit and corresponds nicely with the left-to-right layout of the gems on the screen. What sets Unplugged apart from its console cousins is that you are responsible for all four of the instrument tracks that make up a song--bass, drums, vocals, and guitar--and you must switch between them constantly using the shoulder buttons to keep your band members onstage. In the standard gameplay modes, successfully playing every note in a phrase will result in that instrument playing on its own for a little while, freeing you up to focus your attention on another track. Having to keep the proverbial plates spinning adds a layer of complexity and fun to the already engaging rhythm-based button pressing. Should instruments get neglected and start to fail out, you'll actually hear your gradual demise as those layers fall out of the song, which can be scary. Conversely, it's very satisfying to build the song back up, kicking in track upon track until the entire song is playing again. And if you're not in the mood to juggle tracks, the warm-up mode lets you focus on whichever track or tracks you want, without penalty.

As in the console games, when it comes to racking up the big points, consistency is key. As you maintain a perfect streak, you'll build up a score multiplier that will increase the point value of each note by up to five times, though one slipup will send that multiplier back to zero. Special sections of glowing gems fill up your energy meter, and once you've got enough energy stored up, you can enter overdrive, which has two uses here. If none of your band members have failed out of the song, overdrive will dramatically increase your existing multiplier for a period of time. If any members have failed, overdrive will get them back into the game. The four difficulty levels range from very manageable to blisteringly fast and complex, so players of all skill levels can strut their stuff onstage.

The heart of Unplugged is the World Tour mode, in which you create a four-member band, name it, choose from a number of very cool artist-created logos, and hit the road. The variety of clothing and gear options you can purchase in the game's rock shop means that you can customize your band's look and style to suit your own tastes, whether those lean more toward power pop or death metal. From humble beginnings playing at small clubs and dive bars, you can propel your way to the big time, earning fans and money, and getting access to better vehicles, bigger venues, and an army of merch girls, roadies, sound guys, and others sworn to do your bidding. These trappings of the Rock Band franchise are a perfect fit for Unplugged and serve to make the game more compelling, because you're never very far from your next significant step on the road to rock immortality.

Of course, none of this would matter if the soundtrack weren't any good, but Unplugged's 41 on-disc tracks--all master recordings--run the gamut from bubblegum pop to hardcore metal, from classic rock standards to modern rock hits, so regardless of your personal taste, there's probably something here for you. And the gameplay is so compelling that you'll probably find yourself enjoying playing along with plenty of songs that wouldn't otherwise be your cup of tea. You'll definitely want a good pair of headphones for this game; the PSP's speakers just can't do the songs justice, and the subtle but very cool way that whichever track you're currently playing is brought to the forefront of the mix doesn't really come through unless you're jacked in. The bulk of the tracks are taken from the Rock Band 2 song list, while nine are exclusive to Rock Band Unplugged for the time being. Unplugged will also allow you to download songs from the PlayStation Store, with 10 songs already available at $1.99 a pop.

You'll be so focused on the notes coming down the highway that you probably won't spend much time admiring the graphics in the background, but they exude a genuine rock sensibility that meshes seamlessly with the music and the gameplay. The venues are all richly detailed and feel authentic, whether you're playing in a small Texas bar or a European theater with a massive gaping hellmouth on the stage. And your band members have a great sense of showmanship as they dazzle the crowd with their incredible ability to rock.

The only thing Rock Band Unplugged is really missing is any sort of multiplayer. Given that multiplayer is such a huge part of the console experience, its complete absence here is a bit baffling. Other than that, Rock Band Unplugged looks like Rock Band, sounds like Rock Band, and even feels a lot like Rock Band. Rather than trying to cram the full-blown console experience onto the PSP, Unplugged plays to the handheld's strengths and offers an experience that's distinctly different from the console games. It's not quite the fantasy fulfillment experience that comes with actually drumming, strumming, and singing your way to rock stardom, and it doesn't blaze any new trails. If you're looking for a great way to take the band on the road, though, or just a way to play Rock Band that doesn't require a huge piece of plastic, look no further than Rock Band Unplugged. 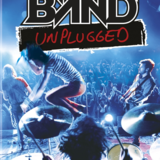