Rochard's gravity-defying antics make for an enjoyable adventure, albeit one that rarely reaches for the stars.

Sometimes, ordinary people are thrust into situations in which they have to do extraordinary things. Such is the case with John Rochard, a simple man who is cast into the role of hero when the mine he's working on is invaded by a gang of ne'er-do-wells called wild boys. Thankfully, John has a handy device that lets him loosen the grip of gravity and accomplish other nifty things, which makes his transition from space miner to space savior significantly smoother. Though this 2D puzzle platformer is short on satisfying puzzles and memorable moments, it's still an enjoyable trek that provides you with a fun assortment of ways to navigate its tricky environments.

Rochard's story isn't one of its strengths; this tale of ancient relics and corporate corruption plays out predictably and ends with an unfulfilling cliffhanger. But John Rochard's unapologetically blue-collar ethos makes him a distinctive protagonist; you may love or hate his use of phrases like "Get 'er done," but in either case, you probably won't forget him anytime soon. Unfortunately, the visuals don't make as strong of an impression. John and the other characters look like rejects from Team Fortress 2, and the environments, most of which are industrial corridors, don't have much personality. However, the electronic music, which sounds like something out of a 1970s John Carpenter sci-fi film, brings some tension to the action.

As he navigates the space mines, space temples, and space casinos of this adventure, John Rochard has a constant companion: his G-lifter. This multipurpose handheld device can grab crates, fuses, and other objects, even if they're on the other end of the screen, and although its rock blaster function isn't actually used for blasting any rocks during the game, it comes in very handy for blasting bad guys. The action boils down to you running and jumping through levels, using the G-lifter's lift ability to solve puzzles and its rock blaster to shoot wild boys, turrets, flying attack bots, and other people or things that mean you harm. The right stick lets you precisely aim the G-lifter, and using it to lift and toss objects feels natural, but Rochard himself moves a bit sluggishly. This befits his girth, but it prevents him from being inherently fun to control.

The most common obstacles to your progress are barriers that prevent the passage of specific things. Some barriers, for instance, allow objects to pass through but are impenetrable to people, while others are the opposite. Much of your time is spent trying to figure out how to circumvent the barriers and get a fuse you need from one spot to another. This often requires you to carefully observe your surroundings, looking for small windows you can fire the fuse through or other environmental features you can take advantage of, and it's pleasant to solve these puzzles, snap fuses into place, and continue on your way. But you rarely have to think too hard about your spatial predicaments. On occasion, you might need to make clever use of a terminal that lets you reverse gravity or otherwise think outside the box to solve a particular puzzle. Typically, however, you employ the same concepts over and over as you move forward, and it's rare to encounter a problem that requires you to look at things differently. As a result, standout moments that offer you a feeling of particular triumph as you overcome a real brainteaser are exceedingly rare.

Rochard does introduce new mechanics at a steady pace, though, which keeps the gameplay from falling into a rut. Most of the time, you have the ability to reduce the effect of gravity, which lets you jump higher and lift bigger, heavier crates. At a certain point, the recoil jump becomes a vital technique for reaching higher areas. To do this, you jump and then shoot a crate downward with the G-lifter while low gravity is enabled, which propels you upward. Over time, you acquire explosive charges and sticky charges, as well as the ability to use the G-lifter to swing from anchor to anchor like a low-gravity, slow-motion Bionic Commando. These techniques bring some variety to the act of traversing Rochard's levels, but like using the G-lifter to solve spatial puzzles, you rarely have to use these abilities in particularly clever or unusual ways. As you get close to the end of the game, the G-lifter gains a fun new power that gives you a huge edge in combat, and the joy of using it on your enemies makes it a nice reward for your progress, but you have it so briefly that its impact on the game is minimal.

Most of the time, combat is a standard affair: You aim with the right thumbstick and fire away. Enemies don't exhibit much intelligence and are content to absorb your blaster fire until they keel over. To change things up, you can use the G-lifter to grab nearby crates (or, after a specific upgrade, flying attack bots) and hurl them at bad guys, though you never need to rely on these techniques because your standard rock blaster is always up to the task. The combat is a simple but enjoyable aspect of the game that lends some danger to the otherwise easygoing act of navigating the levels. But once in a while, combat takes center stage, as you're forced to hold out against lots of enemies while waiting for an elevator to arrive or a colleague to come to your rescue. There's not enough to the gunplay for it to stand on its own, and you might find yourself frequently taking shelter during these battles and simply waiting for your health to recharge, popping out to blast a few baddies, and then taking cover again. It doesn't make for particularly exciting encounters.

But these instances are rare, and though it has few standout moments to offer, Rochard is a mostly pleasant journey. The modest, steadily increasing variety of ways you can use the G-lifter to get around and defeat bad guys keeps things fresh during the course of this roughly eight-hour adventure. It's too bad that Rochard isn't as memorable as its titular hero, but it's nonetheless an enjoyable escape if you're interested in a gravity-defying jaunt through a variety of exotic space places. 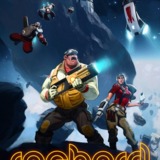