Robopon 2 may be a Pok&#233;mon knockoff, but it's also a charming role-playing game in its own right.

Robopon 2 may be a Pokémon knockoff, but it's also a charming role-playing game in its own right. Robopon are fighting robots that you build, collect, and customize. As the story progresses, you'll have many chances to create and battle with your Robopon. Unlike the multitude of other Pokémon wannabes, however, the characters and story are intricate enough to keep you interested even when you've already fought in thousands of battles just to gain experience.

Although your primary goal is to become a Robopon champion, there are a plethora of other missions and side quests that bring a sense of vitality to the villages you'll visit as well as the characters you'll meet along the way. For instance, one of the first enemies you'll face is a maniacal pharaoh who fights to support the mortgage on his pyramid. Later in the game, you'll come across a duo of software publishers, named Gait and Waffle, who are entrenched in a vicious war over their competing products. A time-travel element also basically doubles the size of your quest and lets you see how some characters came to be good or bad based upon events in their past.

In most cases, the way you solve disputes and acquire the items you need is to fight against other Robopon trainers. Just like in Pokémon, you remain on the sidelines while your Robopon take part in actual combat. You can bring up to four Robopon into battle, and matches are turn-based. During your turn, you can command each robot separately to attack opposing robots with weapons or skills, to defend itself from attack, or to use whatever items you have in your inventory. The winner of the match is whoever manages to scrap all four of the opponent's Robopon.

What makes combat so interesting is that you can heavily customize each of your Robopon. There are weapons available that can give your robots new and stronger attacks. As they gain experience, your Robopon will also learn a variety of offensive and defensive skills to use in battle. In addition to these skills, you can also purchase software upgrades to further enhance their abilities. Depending on the software combinations you install, you may unlock hidden skills that further diversify your arsenal.

Other customization features are heavily reminiscent of Nintendo's Pokémon series. Your robots can evolve into newer and stronger Robopon once they reach a certain experience level. The type and class of your Robopon also influence their ability to use spare parts as well as the extent to which their attacks will damage an opponent. There are three main Robopon types and 15 subclasses, and just like with Pokémon, each class has a vulnerability to another specific class in the game. As well, Robopon can like or dislike one another based upon their oil type--which affects your ability to attack as a team or use healing skills on all of the members in your party.

There are many ways to acquire Robopon. The easiest is by sparking--when you combine batteries together to bring new Robopon to life. There are 20 different battery types to mix and match. Unlike with Pokémon, where some creatures are more rare than others, you can create as many spare Robopon as you like so long as you have enough batteries. You're never at a loss for batteries either, as CPU characters, treasure boxes, and battery dispensers give them away in near-unlimited amounts.

Besides link-sparking, Robopon 2 has two other features that make use of the Game Boy Advance link cable. There is a battle mode, where you and a friend can fight against one another using the robots you've acquired during the single-player campaign. And there are four different minigames--jump, punch, item, and maze competitions--that up to four players can participate in simultaneously.

Robopon 2 is available in two flavors: Cross Version and Ring Version. Although there are 185 total Robopon, each version has a handful that the other does not. The most significant difference between the two games, however, is that one is more difficult than the other. In the Cross Version, you're more apt to have Robopon that can't equip extra parts or software upgrades. Additionally, the frequency of battles in the Cross Version is much greater than in the Ring Version.

If you're an aficionado of the role-playing genre, you probably won't be surprised to learn that Robopon 2 has colorful background artwork and clever robot designs--or that its character animation is choppy, especially during battles. To liven things up, however, the game uses flame, wave, and explosion effects as if they're going out of style. Production values are further strengthened by a number of hand-drawn cutscenes that appear at frequent intervals. Music and sound effects aren't spectacular, but their variety and use is so prevalent that there are no quiet periods to drag down your mood.

The most significant flaw riding against Robopon 2 is that it lacks a popular license like Pokémon or Digimon to bolster fondness for its characters. Nevertheless, the gameplay is so diverse and the story so entertaining that the game stands out on its own merits. 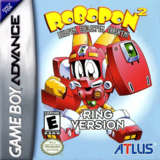 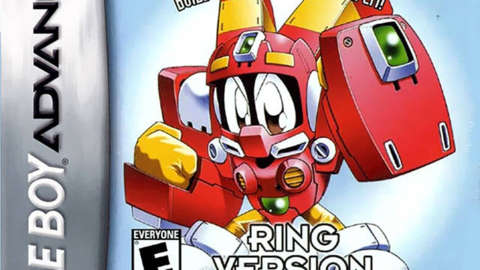 Robopon 2 may be a Pokémon knockoff, but it's also a charming role-playing game in its own right.