Crytek has been experimenting with ways to make games more immersive by utilizing new tech for a while, whether it’s the exceptionally good use of stereoscopic 3D effects in the Crysis games or impressive demos for Oculus Rift. Taking that experience to PlayStation VR, the developer has released Robinson: The Journey, a virtual-reality game that’s everything great and annoying about VR all rolled into one.

The Journey is about a boy named Robin, one of thousands of passengers aboard a massive starship seeking a new world. This craft, the Esmeralda, crashes on Tyson III, a habitable world stuck in the equivalent of Earth's Cretaceous period. Unfortunately, Robin and his floating robotic companion (an AI orb known as HIGS) are apparently the only survivors of the crash.

Soon after landing, Robin discovers a just-hatched and adorable T. rex--and, like any reasonable person would, he adopts her, hugs her, squeezes her, and gives her a name: Laika. Their story then jumps forward a year: Robin and HIGS have made their escape pod a home, they have a working garden, protective energy fences, and a semi-trained baby Laika.

The appeal of Robin's adventure relies on the spectacle of dinosaurs to create a visually stunning VR experience. This is easily one of the best-looking, most technically impressive games to hit PlayStation VR, but it’s also an incredibly interesting, engaging game. Crytek has transformed their earlier VR demos like Back to Dinosaur Island and The Climb into a narrative-focused experience revolving around exploration and puzzle-solving that really shows off how VR can create a new level of immersion.

Robin follows the various paths from his home base, searching for the memory cells of non-functional HIGS units. Such memories yield more insight into how the Esmeralda crashed. Of course, finding these robots is made more difficult by the terrain and prehistoric inhabitants. Thankfully, Robin seems to be part monkey; he can easily climb natural structures, vines, giant cables, and more.

This is easily one of the best-looking, most technically impressive games to hit PlayStation VR, but it’s also an incredibly interesting, engaging game.

The climbing mechanic uses two floating hands (controlled with the left and right shoulder buttons respectively) to simulate actually being there, effectively enhancing your sense of immersion. You have to tilt and turn your head to find the next viable hand grip--and some of these climbs are dizzyingly high. At times, getting the correct hand to grab an obvious grip requires shifting your body around to match the precise angle the game demands.

Robin can also levitate and manipulate items from a short distance, but it's a painful mess of trial-and-error since there’s no smooth way to finely manipulate them in the air. This is readily apparent in the endgame, when you must shove cylindrical power cells into round sockets.

Most puzzles revolve around climbing and manipulating objects, but the objectives are frequently vague. HIGS occasionally provides hints, but the game largely relies on you to figure things out on your own. Laika, for instance, isn’t just a cute sidekick, but a useful puzzle-solving tool. She can growl loudly to scare herbivores, go to specific spots, and come when called. Just the same, part of the overall vagueness of objectives may simply be to lengthen the adventure.

Just running straight through, you can easily finish The Journey in less than three hours (and probably a lot less). The game includes hidden data cells to find, which when analyzed can provide more background data and there is a kind of minigame for analyzing and cataloging the array of exotic animals and insects on the planet, but for the most part, this is a linear trek from start to finish.

Short experiences are nothing new for PSVR, though, and when Robinson: The Journey works, it does so amazingly well

Short experiences are nothing new for PSVR, though, and when Robinson: The Journey works, it does so amazingly well. The sheer sense of scope and detail is stunning. Tyson III is a beautiful place, and its massive dinosaurs are even more impressive. Events like a brachiosaurus stampede, stealthily avoiding raptors, and a particularly inspiring climax involving a fearsome T. rex show off just how amazing VR can be.

At times, you see the game from HIGS’ view. These stationary sequences show off an aerial view of Robin’s surroundings and are easily among the most visually stunning uses of VR to date. The game’s use of 3D to create depth is amazing on the whole, with impressive, but the holographic-like visuals in these segments steal the show.

There’s a distinct advantage to playing Robinson: The Journey on the PlayStation Pro. The game defaults to using step turning where it flips like a slide show in the direction you turn to reduce motion sickness. You can select the smooth-turning option, but unless you’re playing on the PS Pro, there’s a far greater chance of motion sickness due to poor frame rates. The frame rate and draw distance of environmental objects are also enhanced on the Pro, and it looks a little better. It’s still a beautiful game no matter what you play it on.

Robinson: the Journey is one of the most immersive, engaging games to hit PSVR, but it suffers from its short length and reliance on vague objectives. Still, the sheer visual splendor and moments of legitimately awesome sights make it an engaging experience. Crytek has taken their usual flair for gorgeous visuals and made a world worth stepping into. 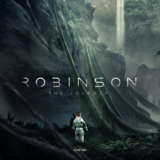 Jason spent about five hours trekking through jungles and tar pits, hiding from raptors, and marveling at giant herbivores and pterosaurs. He reviewed Robinson: The Journey with a copy of the game provided by Crytek