An entertaining story, an impressive mission design, and a lively combat system have been brought together in such a way that the complete game works on nearly every level.

Even though he's one of the most colorful figures of Western European legend, Robin Hood hasn't had much luck making his way to the PC. Fortunately, German developer Spellbound Studios has just released Robin Hood: The Legend of Sherwood, a clever new take on the old English tale that blends elements of the Kevin Costner and Errol Flynn movies with real-time gameplay in the style of Pyro Studios' tactical strategy game Commandos. An entertaining and well-written storyline, an impressive mission design that includes diverse objectives, and a lively combat system that involves more than simple mouse-clicking have been brought together in such a way that the complete game works on nearly every level. In fact, the only significant arguments you could raise against the game would be that it has no multiplayer play and that its production values are a bit out of date.

Robin Hood is a third-person, isometric-perspective game, and, like Commandos, the game is all about guiding a team of units through missions by avoiding the watchful eyes of sentries. The leader of these groups is Robin of Locksley, who joins up with a group of rebels after returning from the Crusades to find his properties seized by the Sheriff of Nottingham. After two opening missions on your own that get you acquainted with the game engine and introduce the first of many allies who become the famed Merry Men, the scene shifts to Sherwood Forest. In the woods, you have a Swiss Family Robinson-style home in the trees that serves as your headquarters for the remainder of the lengthy campaign. It functions in a similar way to bases in traditional real-time strategy games, with structures operating as small factories.

But resource production in Robin Hood isn't simply a matter of erecting a building and watching numbers increase. Everything must be manually created by assigning Merry Men to workshops set aside for the production of specific items. If you want to make arrows, or leather for coin purses, you send somebody to the designated hut to begin work. Every action available in Sherwood Forest is accessed this way. You can train in combat and archery by visiting an area with a drill instructor and tree-mounted targets, gather apples (helpful when you need to distract guards) by walking under a nearby tree, hunt for food by visiting the spit, or dig into the feasting table to recover health.

Missions are accessed through a map, which you can consult in Sherwood Forest. The map itself details the forest and the five surrounding districts of Lincoln, Nottingham, Derby, York, and Leicester. Then you decide on a mission, gather the Merry Men you want to take along--you get to select renowned figures like Will Scarlet, Little John, and Friar Tuck, along with fictional nobodies who fill out the ranks--and get started. Multiple mission choices are typically available, so you can pick and choose based on whatever strikes your fancy. There are many types of missions as well, although they fall into two general categories--cash-generating ambushes of convoys on the forest roads and major town expeditions that advance the plot. The former involves set-piece engagements with preset traps you trigger by shooting arrows at targets in the trees, pits that you can lure enemies into, and Merry Men hidden under leaves. The latter missions are more traditional. In them, you're given explicit goals such as finding out where Maid Marian is or contacting Prince John and then navigating through a horde of the sheriff's men to get there. And as you might expect from a game about medieval England, you'll get additional information from beggars who will exchange valuable hints for alms.

Later on in Robin Hood, you'll have to lay siege to enemy castles. Castle sieges are more involved than standard missions in that you have to earn 12 shields before bringing the fortress down. Shields are acquired prior to battle by giving money to allies, sending groups of Merry Men out on spying patrols, or looting a convoy. This lends greater importance to the major objectives in the game and also gives you a reason to continue with the less-important robberies of merchant and tax collector convoys. During the actual engagement you can earn additional shields toward completing your goal by accomplishing important tasks like lowering the drawbridge.

No matter what sort of mission you're engaged in, all of Robin Hood's maps are puzzles that require you to avoid groups of enemy soldiers. These enemies come in various types, ranging from low-level lancers to powerful knights on horseback and officers skilled at organizing troops. Each has a field of vision that can be displayed onscreen as a glowing cone on the ground by pressing the Alt key. However, this option is limited to one soldier at a time, so you'll be able to see only one enemy's field of vision at a time. Like the enemy soldiers in Commandos, your enemies in Robin Hood will turn to your units if they catch sight of them, then approach and finally attack if they clearly spot your troops. Your enemies' level of awareness is clearly color-coded--green for no sighting, yellow for a sighting, and red when they attack.

Enemies in Robin Hood are also keen to alert others of your presence. If a battle isn't going well, or if they're obviously outnumbered, they run for reinforcements or alert an officer, who usually organizes a group of men and begins a search. They'll also do this if they see a dead or unconscious body. You also have to watch out for civilians, who often panic when they see you and alert guards. It can be frustrating when peasants sound the alarm, especially since, as Robin Hood, you're trying to help these people, but with a little care, you can usually avoid being spotted.

All of this can make Robin Hood remarkably challenging at times, even if you set the difficulty to "easy." In addition to the tough opposition, developer Spellbound has designed some intricate maps in which you'll have trouble determining which path should be followed to your goal. In these, you find groups of soldiers all over the place, looking in all different directions, which means you must crawl past them or come up with some sort of distraction. Merry Men have individual skills that come in handy in such situations. Each of the main characters has distinct abilities. Robin, for example, can toss coin purses to distract enemies or simply knock them out, while Will Scarlet can strangle foes to death with his bare hands, and Stutely is an expert at tying up unconscious soldiers. Generic Merry Men come in aggressive, strong, and mustachioed varieties. Aggressive Merry Men are essentially fighters, specializing in close combat and healing. Strong Merry Men are patterned after Little John, brutes who can carry bodies and whistle loudly to attract enemies. And mustachioed Merry Men are archers, good with a bow but lousy in melee combat. Forming teams where these abilities complement each other is essential to success.

Combat is an alternative to sneaking around. Each Merry Man has a skill rating with a melee weapon or a bow and sometimes with both. The implementation of these abilities during gameplay is handled very well. Fighting with melee weapons is done by clicking on an opponent to attack, clicking on yourself to block, or clicking and moving the mouse to launch special attacks. The latter adds an Errol Flynn flourish to battles--essentially, the edge of your sword follows the movement of your mouse, so you can slide the mouse back and forth for a quick sideways thrust or draw a figure eight. In contrast, using a bow is automatic, since you just set your sights on an enemy and let fly. But as fun as it can be to slice up the sheriff's men, you can't leave too many corpses in your wake. Merry Men are recruited based on the number of lives you spare, and since manpower is crucial to mission success--not to mention resource production and committing groups to spying missions--you can't murder your way to victory.

Unfortunately, Robin Hood doesn't have much in the way of extras or other modes of play. The game has no multiplayer option, no skirmish mode, and no way to edit existing missions. But graphically, Robin Hood looks good, albeit unremarkable. The game's graphics consist of hand-drawn 2D sprites and backgrounds, and these are both brought to life with lifelike character animations and highly detailed backgrounds, including swaying foliage, running water, smoke rising from chimneys, and animated clothing. Battles on staircases often feature combatants sliding down the stairs, one step at a time, when they're knocked out or killed.

Robin Hood's sound is of slightly better quality. The game has a great many atmospheric sound samples that change each time you walk to a different part of the screen. In Sherwood Forest, for instance, you hear birds in one part of the camp and bees buzzing in another. Different actors voice the Merry Men parts and do a good job of granting them a modicum of individuality, but the number of these comments is limited. You can count on Robin saying "I'll send your widow a purse" one out of every three times he kills an opponent. Otherwise, the game's musical score is so slight that you often forget about it while playing.

Robin Hood: The Legend of Sherwood's romantic depiction of Robin and his Merry Men and its clever game design really help bring the swashbuckling legend to life, much like the classic Errol Flynn movie. It's a bit of a shame that the game is so lacking in the way of extras, such as multiplayer options or an editor of any kind, but the campaign itself is presented extremely well. Games such as these, which are based on classic themes or stories, often tend to fall short of the mark, but Robin Hood gets its subject matter right, and with plenty of playability, storytelling, and atmosphere. 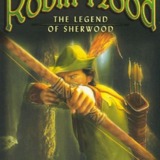