A great story and likable characters make it easier to overlook Riviera's limited combat and exploration.

Tales of demons and angels struggling for superiority have existed for millennia. The theme is certainly no stranger to role-playing games, so it's a true wonder that Riviera: The Promised Land makes such a traditional yarn seem fresh. Here is a good-versus-evil saga that isn't afraid to explore shades of gray. Are the forces of heaven always to be trusted? How many innocent lives should be lost for the sake of the greater good? Lead character Ein confronts these questions and many more, yet the sweet charm of his supporting all-girl cast balances out these heavy subjects with liberal doses of humor and romance.

Not that this is the first time this particular story has been told. Riviera was originally released in 2005 for the Game Boy Advance, and has now been updated for the Sony PSP. The improvements aren't sweeping but they're solid, particularly in the background visuals. On the GBA, Riviera was stunning to look at, and the artwork has been masterfully reworked. Crumbling castle walls and dusky forests are lushly drawn, with particular emphasis on glowing lighting and muted colors. Character sprites, while impressive on the GBA, don't hold up quite so well now. They're noticeably pixelated and the animations are a little stiff. The soundtrack has also been improved, and it's sweeping and dramatic, as any good RPG soundtrack should be. There's also a ton of speech. The voice acting is not always consistent, but while none of it is outstanding, none of it will force you to turn down your volume, either.

Riviera features a lot of familiar gameplay wrapped into a streamlined mix. Exploration is not handled in the typical manner of freely wandering about locales to pick up quests and talk to other characters. Instead, you are limited to look mode and move mode. In move mode, you simply choose which direction you want your party to head in, and they move to the next area. In look mode, the game identifies objects or people of interest, and you select them to initiate dialogue or otherwise interact with them. You can't do so freely, however. Many of these objects require you to spend trigger points, which you earn by performing well in battle. This will often force you to make blind decisions. If you have a single trigger point left, do you open a chest or do you inspect a statue? It's impossible to know what the benefit (or in some cases, detriment) will be until you try. It's a clever system, and depending on what you investigate, you may find new areas or better loot--or you may trigger a trap or disturb a demon.

The end result is streamlined and accessible, but also remarkably linear. There are numerous side areas and other goodies to find by spending trigger points, but overall, the game pushes you along a single path from beginning to end. While there are a few side missions, they are optional and you can complete some of them just by pressing forward naturally. If you like to unboundedly explore every nook and cranny in your RPGs or return to vistas you've already visited, Riviera will disappoint you in this regard. On the other hand, you won't be bombarded by the usual annoying random encounters, since each battle is scripted and feels relevant to the story.

Combat, too, is highly focused and restricted. Before each battle, you choose three party members and four items from your inventory, put the characters in a simple formation, and engage. It's the game's most strategic ingredient, since each party member is adept with particular weapons; and in some cases, how one character uses a particular item may be different than how another character does. For example, Ein will use a staff to bash enemies, Cierra will cast offensive magic with it, and Fia will use it to heal party members. Items are freely usable by any member in the party during battle, since they don't have individual inventories.

Yet while there is a strategy to consider going into combat, fights themselves are limited affairs that get by on the compelling nature of juggling your limited four-item inventory, rather than on interesting combat dynamics. In fact, you don't even get to choose a target during your turn--it gets chosen for you based on the weapon you select and the enemy's party formation. In many of these cases, it's a completely random choice, so an enemy you want to finish off in the current turn may have to wait until the next one. The saving grace among this simplicity is the overlimit meter, which gradually fills as you land successful attacks. Once a party member masters a particular weapon, she is rewarded with an overskill. The skill will be one of three levels, depending on the character and weapon involved. Once the gauge reaches a particular level, you can perform skills of that same level.

Your inventory gives you very little freedom to maneuver. It holds only 15 items, so you are constantly forced to make choices based on what weapons and objects you think will be most valuable in the future. Each weapon also degrades over time, so once you have reached your usage limit, it will break and need to be replaced. It's not a big deal, though: You're constantly earning new items over the course of the game. This is where you'll find the typical level grinding we've come to know and sometimes love in the genre. Once you acquire a new weapon, you can (and should) enter practice mode, where you can gain weapon mastery without degrading your inventory. Yet the grind of practice battles isn't too bad, since it doesn't take long for characters to develop mastery, and you can easily see how quickly you are progressing.

The exploration and combat may take you down a mostly narrow path, but other mechanics supply welcome variety and keep you engaged. Opening a chest or exploring a certain area can trigger a trap or other event. In turn, you'll face a short sequence of button presses or a rhythm minigame. Get these contextual sequences right, and you might earn new goodies. Get them wrong, and you might take a hit to your maximum health or miss a secret location. There is also a shallow but interesting dating sim element: Certain dialogue choices will earn Ein favor with one female companion while alienating others.

This version features an additional chapter, but most players should still be able to complete Riviera: The Promised Land in around 35 hours. It isn't as impressive as it was two years ago, and if you played it then, there's no reason to pick up the new version. But it's a worthwhile journey if you missed the GBA release, thanks to a terrific story and unassuming mix of gameplay elements. Regrettably, the same accessibility that makes the game so appealing is its greatest weakness, and may leave some veteran role players wishing they had something meatier to sink their teeth into. 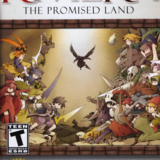 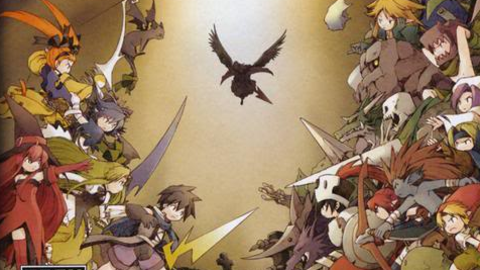 Riviera is an RPG set in a fantasy land beset by angels of destruction.