River City Saga: Three Kingdoms takes the familiar characters and art style from the Kunio series--best known for River City Ransom and Super Dodgeball in the West--and applies it to a unique new setting: the Three Kingdoms era of Chinese history. It's an unexpected mash-up, with familiar characters like Kunio, Riki, and Misako playing dress-up as historical figures, and blending the classical story of warring kingdoms with modern-day smack-talk. Similarly, the gameplay is a mixture of eras, blending some modern-day brawler conventions into a game that is decidedly old-school.

The visual style reflects this mixture, with chunky 8-bit-style sprites set against 3D backgrounds and shading techniques. The setting itself makes a very endearing mixture, albeit not the ideal way to learn Chinese history. I went into the game with only a passing familiarity with the Three Kingdoms saga, and while I'm sure I picked up a few broad strokes and overall ideas, it was sometimes hard to discern what was true to the original story and what was the Kunio series riffing with its own personality and jokes. The major characters are mostly lovable, muscley doofs, true to the Kunio series but perhaps less so to Chinese history.

Like River City Ransom, the bulk of the game consists of beating up street punks, or in this case, bandits or opposing factions of warriors. Since you're in a war, you're usually accompanied by one or two allies who fight on their own as well. But River City Ransom was always a loose and goofy brawler. Even in its day, it wasn't as precise as Final Fight, which came out in the very same year. River City Saga fashions itself much more after the River City Ransom style of game, where movement and attacks feel a little more slippery and you're prone to being tossed around by enemy attacks.

What River City Saga lacks in precision, though, it makes up for with loads of combat options. Like RCR, you can visit shops to learn a wide variety of moves and assign them to your punch and kick attacks, but you can also customize your aerial punches and kicks, special effects for your weapon throws, body throws, and your special attack. You can also set special commands for found weapon types like swords and spears, while more unconventional options can also be discovered, such as a wooden cart you can roll around.

Beyond that, you have Tactics, large, battlefield-filling effects that approximate your character's commanding armies. You can rain fiery arrows down on your foes or flood them with a deluge of water. These are limited by a refillable Tactics meter, making them functionally work like an ultimate move. But there is also an actual, specifically named Ultimate Move that you can set, giving yourself special abilities like slowing time.

The array of options is absolutely dizzying at first. And the tutorials for them are inelegant, with text boxes that use numbers as labels, rather than describing things with words, making an extra mental step to understand what each piece of the interface is or does. Once you get the hang of it, though, it's easy to hone in on the moves that you like best. Around halfway through the campaign, I found an aerial punch, Hawk Fist, that would let me bounce off enemies' heads. I spent the rest of the game pogo-ing my way across the battlefield, Ducktales-style, cackling as I barely touched the ground. It was a genuine hoot.

The focus on relatively large-scale battles came with its pitfalls, though. At least on Steam Deck, I experienced a fair amount of performance issues when a battlefield was especially crowded, or even when visiting a town with more than a handful of NPCs. It's also easy to get overwhelmed in the scrum with the scads of squat muscle-men sprites blocking each other, so you can temporarily lose track of your allies or even yourself.

The game occasionally tries to mix up its pace with something other than battles, and these handful of moments feel frustrating and lackluster. At one point, I was faced with an environmental puzzle that was unlike anything else the game presented before or afterward, and it wasn't terribly clear what I was even meant to do. Another time, I had to complete a platforming challenge to climb a mountain, and in a game that is really not built for precise platforming, I slipped and fell back to the bottom frequently. There are also a few fetch quests for crafting resources that force you to go out and punch trees or straw bales to advance the story. These didn't add to the experience in any particular way, and they didn't play to the game's strengths, so I was left feeling like the experience would be better off without them.

Three Kingdoms is fairly short, consisting of six chapters that last an hour or so apiece. It can last much longer if you take on lots of side quests, and after completing the main campaign, you unlock harder difficulties with better loot. Fast Travel between towns is also unlocked early and costs pocket change, so once you've unlocked most of the map, it's very easy to just hop around between battles and story sequences. But that practice can also make it very talky, as you're often just fast-traveling from story sequence to story sequence, skipping all the random enemy encounters you would naturally hit in-between.

River City Saga: Three Kingdoms isn't as revolutionary as River City Ransom or as subversive and modernized as River City Girls. It exists in a middle ground, with loads of combat options and modern quality-of-life conveniences presented in a gameplay style reminiscent of the original NES game. The Three Kingdoms setting is a cute and clever way to contextualize the concept, making for a breezy little homage adventure. 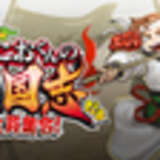 Steve Watts played roughly 8 hours of River City Saga: Three Kingdoms, completing the Normal story campaign and trying one of the harder difficulties. He never once saw someone "BARF!" Review code was provided by the publisher.