Risk of Rain is the kind of game that speaks to the compulsive hoarder inside all of us. You travel through teleportation gates as you seek out your lost vessel, collecting its scattered cargo along the way. But you're not wasting time collecting discarded vampire romance novels or shipments of novelty T-shirts. The items you collect are imbued with special powers, giving you an edge in your fight for survival. This 2D platformer is man versus monster, and only the impulsive drive to snatch up anything not nailed down guarantees your escape from a hostile alien planet.

You run, jump and climb across 10 different and varied stages made up of land both real and artificial, and formed out of flat lines and angles. You reach high platforms and towering spires using ladders, hanging rope, or jump pads. The goal is to level up, earn items and simply survive long enough to find the teleporter that transports you to the next area. Once activated, the teleporter begins a countdown, and the phrase “Stay alive!” is the only warning you receive before the game summons an enormous boss guardian and legions of enemies to prevent you from ascending.

Risk of Rain has a fantastic way of urging you onward. There's a rush of excitement when a new never-before-seen item pops out of a chest or is dropped by an enemy. You sometimes have to fight the urge to wade through a wave of foes just to grab it and see what it does. Discovering new items is a ton of fun, and finding out what they do and figuring out the best method to use them provides some element of strategy. You can find one that projects a damaging aura, for instance, and another that freezes your shots. Some items increase weapon damage or firing speed, while others are passive, increasing cash flow with every kill or healing you out of battle. Items are stackable, which increases their potency or speed of activation. Finding one item that lets you fire a random missile is great, but picking up the same item many more times has you sending out a barrage of missiles during enemy encounters. Drones can also be resuscitated for a small sum. These loyal flying bots quickly become your closest friends, dishing out heavy firepower in the form of machine guns, missiles, or deadly lasers.

Even as I watched the last of the end credits roll by, I wiped the sweat from my brow and jumped back into the fray.

The game employs roguelike elements such as randomized stages and permadeath. Dying means having to start over, but the items you have collected are saved. Because of this, I rarely felt frustrated when my character died, and the return to the menu allowed me to peruse the item log to check out the new gear I had discovered. There is a certain "collect them all" feeling derived from hunting down items, and you may build a list of your favorite pieces of equipment and go for them when they happen to pop up in play. Items are found all over the environment, including item spawners, random shrines, and chests.

At only a handful of pixels in height, your wayward warrior stands rather small on the screen. In some stages, the open sky surrounds you, making you feel even more insignificant. From your small silhouette against the backdrop of a looming violet moon, to the darkened caves lit by blue fungi, you get an immediate feeling of isolation, but you don't stay lonely for long. Soon after you begin your trek into the wild, enemies start spawning en masse. With the passage of time and levels gained, the difficulty increases, making each new game a race against the clock to earn items quickly in order to avoid being overrun by strengthening foes. But if you're feeling too isolated, the game does support local and online co-op for up to four players.

It is certainly possible to collect enough gear to turn your character into a death-dealing beast, fully capable of taking down the mobs of randomly spawning elite enemies near the end of the game without breaking a sweat. When I neared the conclusion, my character, with a horde of drones at his side, dealt out an incredible amount of damage. Each blast of his shotgun knocked enemies far back, while simultaneously poisoning them and leeching away their health.

Risk of Rain is highly enjoyable, and with constant rewards of new items and character classes, it's hard to put down once you start.

But even with my arsenal, one moment of carelessness had me running, dozens of enemies in pursuit, as I tried to mentally force my weakened health bar to please hurry up and replenish. Risk of Rain is filled with moments when you hold your breath as you just barely navigate your character past a mass of enemies and flying projectiles, and even the most seasoned player can get burned by not taking the game seriously.

There are 10 available character classes, nine of which must be unlocked by completing certain objectives, such as getting a difficult achievement. One of the characters is a venomous creature that joins your cause only if you find its cage and defeat it in battle. The entire game can be finished in just one short sitting, but certain items can be unlocked only by one class of character, so giving equal time to each combatant helps you reap even more rewards.

I was surprised by how well balanced the classes are. Each one has unique abilities, and after trying many of them, I discovered there really is no wrong class to choose. The starting commando class brings a good blend of offensive and defensive capabilities, and is the perfect way to begin your exploration. But perhaps you prefer the nimble sniper, who uses speed and a powerful rifle, but needs to manually reload after every shot. The enforcer class is slow, but his shotgun and riot shield make him a great tank character. The engineer, with turrets and mines, favors strategy, while the bandit, with comically oversized cowboy hat and all, chucks dynamite and uses smoke bombs to make a quick exit.

The game's random nature does cause some odd issues, such as items being placed in problematic spots. More than once I discovered a shrine floating just above the ground, while another covered a ladder. This didn't prevent me from using the ladder, but the awkward placement made a large portion of the rungs difficult to spot. It wasn't just shrines, either: in one game, an item chest spawned high up on a mountain with no way of reaching it. The game also suffers from clipping issues, specifically with the drones. These floating machines tail you everywhere you go, but they sometimes pop into surrounding geometry, preventing any chance for them to lend you a hand.

Risk of Rain is highly enjoyable, and with constant rewards of new items and character classes, it's hard to put down once you start. Even as I watched the last of the end credits roll by, I wiped the sweat from my brow and jumped back into the fray: I have an item log that still needs to be filled. 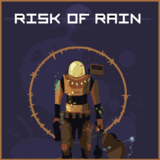 Cameron Woolsey is a veteran roguelike player and spent about eight hours playing Risk of Rain to completion, unlocking five characters in the process.