Risk of Rain 2 is an exciting roguelike with an adrenaline-pumping pace, fantastically varied perks, and intriguing secrets to spare.

As we prepared to take on Risk of Rain 2's final boss, we took a moment to take stock of our Survivors. My co-op partner had three syringes filled with glowing green slime jutting out of his hip, a sword at his side and a crown on his head. A leech was suctioned onto my head, a teddy bear stuck to my shoulder and John Lennon glasses stretched around the front of my domed helmet. Each of these baubles represented a perk we had acquired over the course of our headlong rush to the final boss. This is the kind of game Risk of Rain 2 is. At the end of a run, you can see every advantage that you have collected, all hanging off of your once-simple character model like fuzzy dice on a car mirror.

And, as it launches into 1.0, Hopoo Games' third-person shooter roguelike has a year-and-a-half of early access in its rearview. I didn't play the game during pre-release, so I can't testify to how much content this version adds to what was already there. But I can say that Risk of Rain 2 is a breakneck experience that builds and builds and builds. This is not a game of peaks and valleys. Risk of Rain 2 is all climb until you reach the summit. That's its greatest strength--and its only real notable weakness.

Each run begins with your Survivor emerging from an escape pod onto a hostile alien world. This landscape is largely empty. Lo-fi music plays. It's generally pretty chill and evocative for the first few seconds. But then you're assaulted by a horde of low-level creatures. At the top right corner of the screen, a meter slowly moves right, upping the difficulty from Easy to Medium to Hard (and up and up and up until the difficulty bar just reads "HAHAHAHAHA") as a run progresses. Each level ends when you find and activate a teleporter, summoning a boss monster, which you must defeat to use the portal. In between entrance and exodus, Risk of Rain 2's world is full of interesting decisions and secrets. You may want to sacrifice half your health at the Altar of Blood for rewards down the line. Or you might summon double the boss monsters for a shot at double rewards. Get lost long enough in your search for the teleporter and you may find an underground passage where you can find a hidden code etched on a tablet, which can be used to access a secret realm. As you explore, the world is gradually filling up with enemies; the music is, smartly, slowly building to an all-out guitar-wailing crescendo.

That difficulty slider never stops ticking up, so it's in your best interest to find and defeat each boss as soon as possible. The catch is that if you run headlong into a boss fight, you're likely to get stomped. Each boss is a bullet sponge on its own, and the standard enemies don't stop attacking just because you're in a boss fight. To turn the tables in your favor, you need to kill enemies to collect money, then take that money to the various crates that litter each level for an unlockable boon.

This is where Risk of Rain 2 is at its fascinating best. As in most roguelikes, each run is the process of creating a build and leaning into different strengths and weaknesses as you progress. So, if you want to transform the glass cannon Huntress into a non-glass cannon, you can buy and equip healing perks that help to shore up the class' defensive deficiencies. Or, you could go all-in on offense, collecting damage modifiers until you're taking boss monsters out in a matter of seconds.

Unlike other roguelikes, Risk of Rain 2 doesn't require many sacrificial choices. In similar games, I frequently find myself doing cost-benefit analysis upon finding a new weapon. Should I swap out the slow, but powerful Broadsword, in favor of the Blood Sword, which will leave my enemies bleeding out? But, in Risk of Rain 2, your core weapons never change.You will, at times, need to decide what special attack you want equipped. But, the majority of the upgrades you pick up along the way are additive. The nuances of your build are determined by the perks you pick up along the way. And, gloriously, everything stacks. So, a perk that causes enemies to suffer bleed damage can stack on top of a perk that causes fire damage, reducing your enemies into a bloody, burning mess of flying damage numbers. Or you could buy two bleed perks and watch the numbers bounce off at twice the rate.

This makes the shooting here substantially more engaging than it would be otherwise. Risk of Rain 2 is a roguelike first and foremost, but its third-person shooting wouldn't feel out of place in a loot-shooter. Boss opponents here require an armory's ammo to take down. Normal enemies similarly can absorb a full clip before expiring, and their animations don't really betray the damage they're taking. Or, at least, if they do, they're covered up by the flashy numbers that fly off enemy bodies like fireworks. I was generally unimpressed by the act of pulling the trigger.

What makes Risk of Rain 2 interesting is the way that your choices affect what the shooting does. In addition to the process of stacking perk on top of perk until your build sways like a late-game Jenga tower, there are other choices to make during a run and before it even starts. Initially, you only have access to the Commando, a bubble-helmeted space warrior, with a stable (if unremarkable) pistol, a burst fire ability and a powerful plasma shot. This Commando is a solid all-rounder. On the other hand, MUL-T, a bulky robot you unlock after playing five runs, has a massive health bar and painfully slow default movement speed. I say "default movement speed" because he can pull his metal limbs into his boxy body and boost into enemies like a dumpster speeding down a mountain. There's a substantial roster of Survivors, and so far I've only unlocked a little over half. I've learned the basics of their skillsets, but the prospect of learning to master their skills and synergies is exciting.

That variety is echoed in the roster of enemies. The act of shooting can be a little dull, as you take on bullet-sponge after bullet-sponge. But, the diversity of enemy size, movement and abilities helps keep combat fresh. You're frequently switching between different abilities as you're confronted by different monsters. I often used the Commando's burst fire to take out the fiery eggs that fly over your head like a flock of angry, spherical sea gulls. And, when I got swamped by enemies as MUL-T, I could launch a bomb into the crowd, then use my boost to barrel through them like a bowling ball. The variety of enemies is smartly complemented by the variety of each Survivor's base skills.

The game's greatest asset is also its greatest weakness. As you progress through the difficulty ranks, enemies begin to spawn with ridiculous regularity. At certain points, they can mob and destroy you easily, biting huge chunks out of your health bar at a time. So, staying alive requires constant vigilance. Runs can often last for an hour or longer. While other roguelikes include a brief respite between missions during which you can buy upgrades and tinker with your build, the only break you'll get in Risk of Rain 2 is the brief load that separates one hostile alien world from another. Other than that, you can sleep when you're dead. It all contributes to a game that feels like it never stops crescendoing. And that's exciting! But it also meant that I often felt spent after a single run. There is no real rest to be found here.

Risk of Rain 2 is lo-fi beats to relax to with the bass boosted until the subwoofers catch fire. And explode. And bleed? What begins as a chill loot-shooty time quickly escalates to a frantic fight for your life where everything is burning and there's a big red target on your back. The lack of any strategic layer between the action did leave me feeling burned out. But the additive nature of the game's builds give Risk of Rain 2 the feeling of a pebble skittering along a rocky cliff. When the avalanche begins, enemies would be well advised to get out of your way. 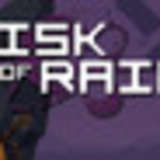 Andrew played 22 hours of Risk of Rain 2 on PC for this review, with about a quarter of that spent in co-op. He mostly stuck to the Engineer, who he refers to as "The Bomb Guy." Code was provided by the publisher.