Risk II not only stays faithful to the original gameplay, but it also presents some pleasant new spins on the classic Risk formula.

When it comes to computer versions of board games, you'll almost always get a compromise. Either the computerized version no longer plays anything like the original board game, or there's not enough difference to even warrant a computerized release. Fortunately, the sequel to the strategist's strategy game is something of an exception to the rule, as it not only stays faithful to the original gameplay, but it also presents some pleasant new spins on the classic Risk formula.

Risk II now comes in three different variations of Parker Brother's classic board game. There's the classic mode, which you play using the rulebook of the board game; the same-time mode, which eliminates individual player turns and instead determines the results of all players' attacks simultaneously; and a tournament mode, which is a series of both classic and same-time games that awards points for completing certain objectives.

The same-time mode is essentially a brand-new game. While the mode uses only a slightly different map and set of rules, its differences and subtle nuances are enough to throw off even the most brilliant of Risk strategists. Instead of having individual player turns, same-time Risk is now split into phases. Each phase lets you set up your armies and attacks, then the conflict begins once everyone has submitted their battle orders. During this period of time, armies on the offensive that have yet to attack are considered en route to the country they will be invading and cannot defend their home country. Thus, attacking armies have to be considered carefully, as sending your whole army on an attack leaves your country vulnerable to an attack from a neighbor. In addition, multiple neighbors can now attack one country, giving an advantage to the player who owns the most of any country.

Same-time Risk doesn't use the classic six-sided dice; instead, it uses a completely new die rule - the attacker and defender each gets one 12-sided die that has a certain amount of number values on it, depending on the size of the army. There are five ranks of the 12-sided dice, called "battle dice", from white to black. The white die rolls an average of 2.6, while the black die rolls an average of 4.5, making it easier for larger armies to destroy smaller ones. Not only does the color of the battle dice determine how strong your roll will probably be, but it also determines how many armies you'll lose upon the outcome of the roll. While this new system is certainly interesting, it's somewhat one-sided, and it completely eliminates the infamous "Rambo" scenario in which your single defending army successfully repels an attack, even though it's hopelessly outnumbered. The advantage is now definitely with the attacker, as the defender no longer wins a tie in same-time Risk. To make up for this, same-time Risk sports a rule that limits exactly how many armies you can use to fortify certain territories. Unfortunately, this rule is frustrating, as you'll often find yourself with more reinforcements than you can spend on your border territories, making you waste those armies on a country that's not at immediate risk. With all these variables, same-time Risk is a quicker, more ruthless game than the classic version, and it couldn't possibly exist without the assistance of a computer to keep track of all the details. Each of the game's different play modes contains a good amount of options that can dramatically change the play style. You can decide what objective wins the game - from world domination to individual missions. There's also a brand-new winning objective that is reminiscent of the short-lived Castle Risk game: Capital Risk has you designate one of your countries as your capital. To win the game, you must occupy your capital as well as those of at least two other players. There are also three different ways to determine starting positions: You can either go by the book and take turns selecting countries, or you can use "house rules" and deal all the territory cards out at the beginning of the game, randomly assigning countries to players. The third way is a completely new and somewhat painstaking method of distributing the territories. Each player starts the game with a certain number of influence points, which you use to bid on each territory as it's auctioned off. When a final bid is placed, the player spends the points and gains the territory.

If you can't find any local players to share the hot seat with you, you can always play Risk II over a LAN or over the Internet. You'll also be able to play against any of the game's 16 computer-controlled generals, each of whom has a different play style. Unfortunately, the generals aren't really that proficient, and a typical game against the computer is easily won.

Besides the new modes, there's a definite advantage to playing Risk II on your PC than on an actual game board, as Risk II is filled with great visual effects. There are plenty of helpful views to choose from, such as the globe view or a view that categorizes boarder threats and colors them relative to the degree of the threat. In addition, when you're one of the armies engaged in an attack, the map quickly zooms in to the actual geographical representation of the territory being fought over, complete with mountains, beaches, and actual troops that represent the size of your army. The zooming effect is excellent and never gets old. Little graphical touches such as men who fall off their horses when they're shot, exploding dice, and actual shadowing go a long way to make Risk II more than just another boring computer board game.

There's not a whole lot of sound in the game. A godlike announcer will fill you in on certain details, such as when the attack phase is occurring, but there's not much more than that. When you're engaged in a battle, the dice roll will sound like a shot being fired, and if a horse or cannon are involved, you'll hear the appropriate noise. There's no background music, making the game unnaturally quiet at times.

Risk II does a great job of bringing new options to the table without compromising the original game. Same-time Risk is different enough to be refreshingly new to those bored with classic Risk, and the classic mode is a great representation of the original board game. It would have been nice to see Hasbro integrate Castle Risk into Risk II, but without it the game still stands strong. 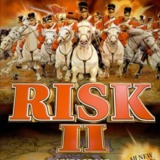 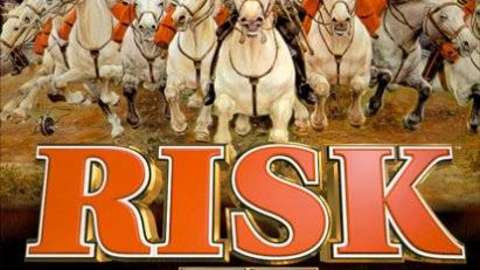 Risk II not only stays faithful to the original gameplay, but it also presents some pleasant new spins on the classic Risk formula.