Is America really ready for the world's first noodle Western?

Known primarily as the progenitor of the snowboarding genre, developer and publisher UEP Systems has returned to the fray with a decidedly funky game called Rising Zan: The Samurai Gunman. This offbeat title was originally released in Japan earlier this year, and Agetec bravely picked it up to unleash on the unsuspecting American public. More power to them, is the general consensus. In Rising Zan, the main character's name is Zan, and he's a gunman with a samurai sword (or is he a samurai with a gun?). Either way, it doesn't really matter - despite UEP System's good intentions, the game is a solid effort, but it ends up with mixed results.

According to UEP Systems' swashbuckling (and grammatically incorrect) story, "Johnny lived in a small gold mining town and had many dreams, one of which was to become the greatest hero that ever lived. He and Sheriff spent much of their time roaming around in search of adventure. One day, he heard a rumor that people began being reported missing at a nearby ravine. Sensing grave danger, Johnny went to the ravine to explore. There they were, strange-looking folks start attacking Johnny. He fought back, but he did not stand a chance with a man with MASK. Suddenly, with a flash of light, Johnny fell to the floor unconscious, with blood flowing from his face. Suzuki, his father's lifelong friend from Zipang, saved Johnny. Johnny begs Suzuki to teach him Zipang's legendary fighting technique. He agreed to teach Johnny. A days later, Suzuki and Johnny departed to Zipang. Many years have passed... Johnny is now a master of both his own traditional fighting method and Zipang's. He announces himself as Super Ultra Sexy Hero, and commits himself to his new name ZAN and returns to his hometown."

That said, our hero, reborn into a world of Western/Asian environments and Japanese mythology, sets off on an adventure few have ever dared to imagine. Although some might point out that Rising Zan looks like another Tomb Raider-style game, it really plays more like Mega Man Legends. Push forward to run forward; and the X, square, and circle buttons control jumping, sword slash, gunfire, etc. The game is mission based, and each level is of medium length (as opposed to something like, say, Syphon Filter or Turok 2), with a fair learning curve. There's nothing in it so difficult that you'll want to put the game down, and you'll be able to figure out each level within a couple of tries. During the course of the game you will have objectives like freeing some hostages, solving some simple puzzles, performing Track-and-Field-like skill tests (button-mashing exercises to build up strength meters, etc.). You' also compete in a batting contest in which you'll use your samurai sword as a bat. In any case, there's enough variety to keep the game from getting old. The one thing that remains consistent, however, is the boss encounter you'll have at the end of every stage. Fortunately, there are power-ups generously littered throughout each level, so when it comes time to face the boss, you won't be short on life. Each boss has a separate pattern you must decipher to make short work of him, but once again, these too can be sorted out quickly. That's not to say the game is too easy - levels increase in complexity as the game progresses. Cutscenes placed between levels keep the storytelling elements intact. Although these are CG, they look as though they use the game engine, because the models are so awkward and blocky. Once again, kind of like Syphon Filter's cutscenes.

The game itself, while ambitious and quirky, suffers from some problems that keep it from being in the same realm of quality as, say, Tenchu. First, the control, while not necessarily bad, is fairly stiff, with the digital pad offering a simple eight-direction feel that doesn't get much better with analog control. Secondly, the graphics are really kind of rough, with lots of pop-up and pixelation. This game is probably on par with the Coolboarders series, but it isn't close to being in the same league as Crash Bandicoot or even Croc, which is a shame since we're past the fourth and fifth generations of PlayStation software. The soundtrack, which reeks of spaghetti-Western Nipponese, suits the game, but the sound effects are kind of harsh, and they lack any real subtlety. Basically, the game is not some eloquent affair, but rather a brash attempt at creating something funky and new. Perhaps the most exciting aspect is the rating system featured at the end of each level, where you are rated on your sword-swinging prowess. Various ratings range from "you are chicken," to "you are hero," to the ultimate of accolades "you are Ultra Sexy Superhero!" Thankfully, Agetec, the US publishers of this title, kept the same ratings awards without undue localization. The American version of Rising Zan has re-recorded music, redesigned stages, increased difficulty, more enemy variations, refined collision detection, less pop-up, red blood, more character animation, slightly different power-ups (from sushi to, er, hamburgers?), plus additional voiceovers. Zan's responsiveness has also been improved so that the control feels quicker and more responsive. If you're really good, you might get to see some naughty bits, too. Woohoo!

As it stands, however, the game is definitely of B-movie quality, although no one can fault UEP Systems (or Agetec, for that matter) for taking chances. Chances like these are needed to help invigorate the industry, and, to UEP's credit, this is certainly not a victim of stale game design. However, the end result is a lot rougher than it probably needs to be. Decidedly flawed, but not without value. Is America really ready for the world's first noodle Western? 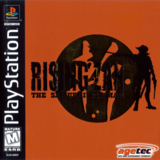 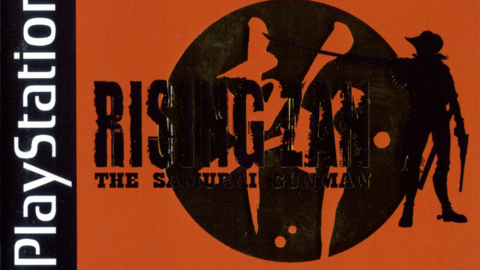 Is America really ready for the world's first noodle Western?

6.9
Sign In to rate Rising Zan: The Samurai Gunman