A pirate's life for me.

Risen 3: Titan Lords, like its two predecessors, is not the kind of role-playing game typically considered to be a worthy one should you apply certain objective measures. Its cliched fantasy-pirate story trades in the usual tropes, featuring voodoo priestesses, busty bar wenches, and foul-mouthed seafarers seeking a swig of rum. Its exploitable combat takes the sting out of victory, keeping late-game combat from being much more than a minor time-waster. Each game system has an annoying flaw or three of some manner or another; lines of dialogue appear in nonsensical order, execution moves are accompanied by nauseating camera contortions, and you might suddenly have a new weapon equipped after a loading screen.

What Risen 3 has that will keep you pressing forward is a sense of grand adventure, directing you from one island to the next while you seek to unite your body with your missing soul after your death and resurrection. During your travels, you parley with ghosts, many of which have the sour attitude you might expect from a spirit forced into a partnership with a mere mortal. You morph into a colorful parrot and float to otherwise impassable ground, you train a monkey to steal gold and grog, and you choose which of several powerful factions to align with. These are the same islands you explored in Risen 2, but they have been refreshed and redesigned, making Risen 3 more than just "Risen 2.5," though the thematic gap between the second and third games in the series is not nearly as great as that between the first two.

Once you complete the tutorial, you gain access to most of Risen 3's fictional Caribbean-inspired map, and move from one island to the next via your modest sloop, which is later replaced by a more ornate vessel with its own crew. Along the way, you meet a number of friends who may accompany you on your journey, including returning sword-wielding bombshell Patty, who is your sister in this scenario. Patty is not the most interesting of these companions, one of whom can fight at your side at any given time. The assortment of comrades includes a ghostly pirate and a voodoo practitioner who's handy with a shotgun and shockingly good at handling his liquor. My favorite companion, however, was Bones, a druid with a phlegmy voice and a comedic form of bloodlust. (His constant warcry--"I'm going to make a hat out of your skin!"--did wear thin, however, particularly when facing enemies that had no actual skin. That skeleton has no flesh, Bones!)

Bones, like the other companions, disappeared once or twice for no apparent reason, most often on the endgame island, where I sorely needed his assistance. (One of many bugs that make you wish Risen 3's nuts and bolts had been fully tightened.) And a shotgunner aside, most of your sidekicks are functionally the same, so don't expect them to exercise a wide diversity of skills. Luckily, you gain access to a variety of different powers of your own. It's easy to stick to the skills that enhance swordplay, given how vital close-quarters combat is during the early game. In time, however, you will be summoning hellhounds to your side and flinging ice shards at golems if you so choose.

Deciding which customization paths to travel isn't as simple as selecting possibilities from a skill tree. As with previous Risen games, you must first spend glory (that is, skill points) in order to meet a proper numerical threshold, and then purchase related skills from a trainer. Furthermore, not every kind of trainer is available on every island, so it takes time and money to gain access to the most interesting skills, which can take a dozen or more hours. If you fancy a bit of necromancy or crystal magic, it takes time to make those powers part of your standard repertoire. Luckily, voodoo dolls and spell scrolls let you conjure the elements before you reach that point.

It's a solid leveling system that subverts the economy in interesting ways, forcing you into meaningful choices in the service of your chosen play style. By the end of the game, I had put aside fencing weapons and picked up a supernatural orb that spewed forth waves of magic, a fine weapon when standing toe to toe with a demonic soul eater and its shambling minions. Sadly, those decisions are diminished somewhat by the combat itself, which is far more fluid than it was in previous Risen games, but is too easy to exploit. When the gods of battle smile on you from above, there is a nonetheless a flow to battle missing from the previous games; no longer does a single sand devil mean likely death on the very first beach you comb, now that you can dodge and block--two options that were absent when Risen 2 was released (though later patched in.) It's the possibility of facing intriguing new creatures that keeps combat from losing its luster entirely; giant crabs and claw monkeys give way to glowering dark spirits, charging artiodactyls, and growling gorillas.

What Risen 3 has that will keep you pressing forward is a sense of grand adventure, directing you from one lush island to the next while you seek to unite your body with your missing soul after your death and resurrection.

The combat system's very mechanics undermine themselves, unfortunately. The dodge becomes your "get out of jail free" card: you can repeat the move ad nauseum, avoiding damage even if you're simply doing somersaults against a wall. Your proximity to your enemy has too little bearing on the outcome of battle. Aggressive pirates can cross an improbable distance with a single swing, yet avoid your blade's anger should they activate a dodge animation, even if the dodge doesn't successfully remove them from harm's obvious reach. It was hard not to roll my eyes during certain combat scenarios--scenarios in which I could slash away at a giant troll from a ledge above without suffering any ill consequences, scenarios in which I fearlessly tumbled around like a single sock in a rotating clothes dryer. In time, I won most battles easily, and the great supply of available provisions ensured I was always healthy. In Risen, combat was frustrating, but at least every encounter was an event; in Risen 3, combat is rarely more than a mild entertainment.

That isn't so say that I didn't delight in taking on the undead gangs that pour out of Risen 3's portals to the underworld. Risen 2's magical shenanigans have been greatly expanded, allowing for colorful displays of fire and ice. It's easy to be disappointed in Piranha Bytes' decision to retread the same ground, but never did I feel like I was playing Risen 2 all over again. The world is now beleaguered, suffering from the onslaught of dark forces, and not alive with civilian activity in the way Risen 2 was. I was immediately struck by how this world was no longer buzzing with love and labor.

Later, however, I came to appreciate how fear had spread across the land, causing distrust among comrades and tearing apart towns that had once bustled with commerce. The solitary fortresses where the mages and demon hunters dwelled exuded a hushed mystery that seemed appropriate, given the seriousness with which both factions approached their business. Bones aside, few characters make an impression on their own, but almost every character speaks in a hearty and assertive tone. They have lived their lives and lived them hard--and there is still more hard living to be had.

Those robust characters serve a shrug-worthy save-the-world story whose primary purpose is to get you exploring lush jungles and mining crystals in winding caverns. It isn't the primary narrative but the little stories you encounter that make a noticeable mark, even when the vibrant dialogue is overshadowed by the nonsensical order some of the dialogue options appear in. (Why am I telling this pirate that I took care of the looming threat, when he was with me when I did it, and already handed me a reward?) I had a hard time caring about whatever political shenanigans the Inquisition was up to, but the adventurer convinced that ducks were staring at him as he slept? This was a story I needed to hear. Sure, I needed to worry about oncoming evils, but solving the mystery of a man's insanity was far more intriguing.

It's unfortunate that Risen 3 springs new irritations on you whenever it springs a new game system on you. Suddenly you're engaging in one of a few sea battles, which are fun new additions when they first appear, but still might have you wondering why the game doesn't provide you a cooldown bar for your side cannons, or why the final sea beast accosts you with attacks your ponderous vessel can't usually avoid. You might open your inventory window during battle to guzzle down some painkilling liquor, only to return to battle and find that the game has inexplicably sheathed your weapon on your behalf. Then there are soul points, which relate to an unnecessary morality system that doesn't seem to abide by any comprehensible set of rules. Sometimes you can be a jerk and have no effect on your soul standing; other times, you lose a point for being simply indifferent to another character's long-winded story. I never gleaned what consequence the soul meter had, and other mechanics--the dream sequences, the ability to turn on a type of spirit vision--were similarly half-baked.

I'm guessing, however, that if you're interested in Risen 3, you already have a certain expectation of it--one based on the developer's history of making interesting, exhaustive, clumsy role-playing games that manage to invest you in spite of their awkwardness. It's a matter of vision. Risen 3: Titan Lords is not the studio's grandest gesture, but the tendrils of this fantasy saga still grab you. The glitches and irritations poke at your patience, but the promise of buried treasure on a distant beach still compels you. Risen 3 has the potential to sweep you away, provided all that driftwood doesn't keep you at shore.

View Comments (167)
Back To Top
7
Good
About GameSpot Reviews 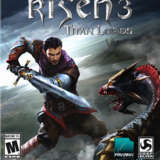 Kevin VanOrd played all three Risen games. It took him about 35 hours or so to finish Risen 3, during which time he aligned with the demon hunters, collected all but one buried treasure, and helped Patty work her wiles on all of her targets.