By combining some of the concepts of Civilization with the general gameplay of Age of Empires, Big Huge Games has created a truly outstanding game.

Designer Brian Reynolds had already made a name for himself with his work with Sid Meier on turn-based strategy classics such as Civilization II and Alpha Centauri. But Reynolds went off and founded a new studio called Big Huge Games and began work on the historically themed Rise of Nations, a game that has finally arrived on store shelves. This superb strategy game combines the best elements of real-time strategy with the conventions of the turn-based blockbusters that Reynolds had worked on previously. By combining some of the concepts of Civilization with the general gameplay of Age of Empires, Reynolds and Big Huge Games have created a truly outstanding game.

Rise of Nations might resemble Microsoft's Age of Empires games at a glance--like other, similar games, it has a host of different civilizations (18, to be exact), each with unique bonuses and four to five unique units. But beyond that, the game has a lot of depth, more so than other real-time strategy games, thanks to novel concepts such as national borders, city assimilation, and more. While these new features might seem foreign to real-time strategy players, fans of Brian Reynolds' turn-based strategy games should know them well.

Unlike in other turn-based games, in Rise of Nations, cities are a focal part of your strategy. Each of your cities has a radius around it that constitutes your national border. You can build other buildings only within your borders, and you can build only a limited number of different improvements for each city (such as a maximum of five farms each). Since expanding your empire depends entirely on your cities, the game makes you think harder about how and where you should expand. This focus on cities also means that each one will become a distinct community, with its own farms, temples, universities, and so on--actual cities will populate your empire, unlike in other real-time strategy games, where most of your structures are at your main base, while your additional town halls exist in isolation near some resources.

This intriguing concept of national borders works as you might have expected it to in an epic turn-based game, such as Civilization. In practice, national borders add depth to the game without being overwhelming. For instance, since your national borders grow with the number of cities you control, you may wish to aggressively expand your empire by building lots of cities, but you'll be limited by the extent of your research in civics. In addition, any troops you send across the borders of an enemy nation sustain attrition damage (to simulate the difficulty in supplying them over vast distances). It's an intuitive feature, and it also prevents your enemies from rushing you early on in the game. However, both you and your opponents can recruit supply wagons that protect armies from attrition damage.

In the meantime, you'll be able to recruit a wide array of different soldiers from different nations across different time periods. Like other real-time strategy games, Rise of Nations uses a rock-paper-scissors unit balance system--for instance, cavalry are devastating against some archer units, while pikemen can make short work of cavalry. Rise of Nations' combat is fast-paced, though it also features interesting tactical considerations, such as flanking and rear attacks, as well as special abilities that your general units can use to provide extra defense for your troops, cause your troops to move on a forced march, or even hide your army briefly to set up an ambush. Cities are also crucial to warfare in Rise of Nations, since successfully attacking a city doesn't destroy it, but instead captures it for your own use. As such, battles over cities are crucial and potentially very rewarding, and they also make the stakes a lot higher in multiplayer battles, which, despite the game's epic historical scale, can often be completed in less than an hour.

Thanks to its turn-based roots, Rise of Nations has other interesting features that aren't common to real-time strategy games, but these features allow the already varied game to offer you even more options. For instance, you can build wonders of the world (just like you could in Civilization), and these powerful monuments can provide bonuses to your troops as they stride into battle in real time. In addition, Rise of Nations doesn't have any troop transports, so you don't have to micromanage your troops as they march individually onto a boat. As long as you have a docks structure in place and the right technology level, all your land-based units will automatically become transports when they cross water. And as you'd expect from a game designed by Civilization II's cocreator, Rise of Nations offers multiple victory conditions to suit a variety of different play styles. You can win by conquest, by controlling 70 percent or more of the entire map, by building or capturing a critical mass of wonders, or by capturing and holding an enemy's capitol.

Rise of Nations' unusual resource model is also noteworthy. Unlike in other real-time strategy games, resource-rich areas don't get depleted. Instead, in order to gather the game's basic resources, you need only place the appropriate gathering site for each resource and assign villagers to these sites, and they'll begin gathering on their own. The knowledge resource, which is vital for most technologies, comes only from the universities that you build for your cities. You can also find rare resources--such as precious minerals, crops, or furs--around the map. If you station a merchant at these sites, they'll give you bonuses to your resources and other benefits. Rise of Nations makes it easy to understand how many resources you are getting and how additional villagers can help you get more. Each building can have only a certain number of villagers in it, and the interface clearly shows how many resources you get per villager working there, though you can research improvements to make your villagers even more efficient.

Of course, with so much of the game's design rooted in the Civilization model, it's no wonder that Rise of Nations' research system also stands head and shoulders above the systems featured in other real-time strategy games. Although it isn't as comprehensive as the technology tree of Civilization III, Rise of Nations' research fields are still broader than those of just about any other real-time strategy game yet. There are four main areas of research: military, civil, commerce, and science. Each area has eight levels, as well as a top-level technology for each area once you reach the eighth stage. However, each of these technologies is balanced fairly well against the others, so you're free to choose the technological path you most prefer without worrying that your unbalanced research might leave you vulnerable in some way. Additionally, you'll conduct most of your research in a single building: the library. The consolidation of most of the game's technology under one roof is a breakthrough in logistics--you no longer have to go hunting for different buildings to conduct research.

Like Age of Empires, Rise of Nations features eight different ages: classical, medieval, gunpowder, enlightenment, industrial, modern, and information. Even though game's timeline begins in the Dark Ages and ends in a futuristic era, it manages to strike a perfect balance between the different ages and the breadth of technologies available in each. And despite all that depth, Rise of Nations is paced well and isn't overly complex--the game's interface makes it easy to understand what you need to do to advance to the next age, and the resource costs of advancement are challenging to meet without being ridiculously expensive.

The only really serious complaint that hard-core strategy fans could level at Rise of Nations is that the game doesn't have a story-based campaign like so many other recent real-time strategy games. Instead, Rise of Nations features a single-player "conquer the world" campaign in which the world is divided into sections, like in the classic board game Risk. You start out as one nation on this map and attempt to literally conquer every other country in the world. Controlling your nation on the world map is turn-based, but when you enter into territory you don't control, the game changes to real-time mode. Interestingly, the campaign offers different scenarios for different territories. In one territory, your mission might be to withstand a barbarian raid for 30 minutes. In another, it might be to race across a map to destroy a barbarian encampment. In a contested territory, you might have a normal conquest game in which you must eliminate the enemy. Capturing and holding additional territories gives you benefits, such as an extra army or resource bonuses you can take with you into every tactical battle. However, this campaign, which is really just a glorified version of Risk, isn't as developed as the actual real-time game. Still, it's enjoyable, if a bit simple, and it adds a substantial single-player component to the game.

In many ways, Rise of Nations is better than the strategy games that have come before it. It's smarter. It's more challenging. It gives you more to do. It also has a highly customizable multiplayer component, as well as good tutorials that will help new players get started quickly. The game even has fairly detailed graphics, especially for the different civilizations' architecture, as well as good sound effects and a dynamic music score that changes to reflect what's happening on the battlefield. But what really sets Rise of Nations apart are all the new concepts it introduces--cities, attrition damage, commerce caps, caravans, rare resources, a broader and more distinct technology element, national borders, and more make the game deeper and in many ways more enjoyable than any other real-time strategy game to date. For years, real-time and turn-based strategy games sat at opposite ends of the spectrum in terms of their gameplay and audience; very few games have even tried to bridge the gap between them. But now, these two distinct styles of strategy have come together in the form of a truly excellent game.

View Comments (6)
Back To Top
9.3
Superb
About GameSpot Reviews 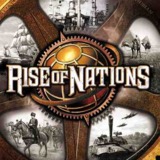