Ring of Pain can be frustrating in its difficulty, but more often than not, it's satisfying and wonderfully creepy.

Ring of Pain is a roguelike card game that's too damned creepy to not live rent-free in your head long after you're finished. You play as someone trapped in darkness, unsure of who can help you out and who intends to lead you into ruin. The constant uncertainty leaves you always second-guessing yourself, while the action manages to keep you firmly in the moment as you juggle satisfying risk-reward choices. This balance of feeling both powerful and vulnerable--but in different ways depending on your choices--manages to shake up potentially repetitive attempts to navigate the rings of cards in your efforts to escape this eerie, unsettling world.

Each run in Ring of Pain starts out largely the same: It's just you and a circle of cards that probably want to kill you. Two cards in the circle are in the foreground and can be viewed and interacted with immediately. Cards feature an interesting array of spooky creatures that can be fought or dodged, items to be collected and equipped, stat boosts, potions, curses, or doors to be passed through into another new dungeon ring. There’s a menagerie of different cards to come across, which keeps you constantly on your toes and never too sure of what to expect--but there are still patterns and hints to the madness, such as themed dungeons that keep things purposeful rather than totally random. The rings cycle through depending on your actions--you might find a card that shuffles the ring, or a card might cycle itself through the ring to chase you--and how you choose to navigate them will determine your play style.

You don't have to clear a ring to move to the next stage, just to get to a door. You have your own base stats, which change based on the items and boosts you find and equip. It’s best to think of yourself as a sort of customizable creature card with slots augmented by what you find. Most of the equipment will have basic stat augments, but others will offer interesting strategies like gaining health from curses or knocking back creatures after an attack. Each little factor can greatly determine how effective you are in satisfying ways that alter available strategies. The knock-back ability can make slow but devastatingly strong enemies a total non-issue as they no longer have a chance to attack, while without it even sneaking past them can be risky business.

All of your stats match up against actual creatures to determine how much damage you'll deal and take as you fight your way through, and you can really see your character grow in strength as you change your build. The more cards you see may mean more items or other helpful things to find and add to your strength, though they may also be traps or deadly enemies. You earn souls for defeating creatures, which can be spent to unlock chests and occasionally purchase items or stat upgrades. This means cleaning out rings can offer great rewards, though there’s genuine risks to your hubris. When you're weak, sneaking through rings just trying to survive and find a potion or helpful item feels fantastically desperate. When strong, just charging through and defeating everything before moving on it feels really powerful and somewhat diabolical.

However, it can turn very quickly. Some enemies can do a surprising amount of damage, attack from further back in the sequence of cards, explode, poison you, or just block your path. Usually they look disturbing as hell with globular bodies or weird spikes or those terrible ones with the far-too-long arms that actively chase you down. Even worse, they might be a cute puppy or frog whose souls you may need to decide to steal. They also make disturbing noises when they attack, with squelchy screams and slashes that add to the already ominous background music. Often you're never as safe as you think you are, and there's an immense sense of risk versus reward. It feels like the right balance of power and uncertainty given the intensely creepy and somewhat helpless setting.

What makes it enjoyable is how much each run can change. Despite being quite a repetitive game by design, the different items and stat boosts can dramatically impact how things play out. Not only do they alter basic things like your attack, defense, and speed--which will determine how well you do when battling cards--but they can also offer other interesting buffs like earning souls quicker, healing when hit by explosions, or doing damage when gaining health. Your game knowledge grows with each playthrough often in surprisingly eye-opening ways, even many hours in. You may spend your first few playthroughs generally stumbling through the darkness and likely dying a lot, as intended. But there's a genuine sense of understanding that grows as you experience more playthroughs and get a taste of what you can accomplish.

The runs themselves are quite quick, and you'll usually at least add a new item to your roll list for your trouble. These add more options to your arsenal and some may be stronger than others, but success is definitely more in how you use what you’ve found rather than the power of the items themselves. I still often die less than a few minutes in, and those times where I've made it all the way to the end tend to take 20-30 minutes. It's great to pick up and play, but it means if you're completing multiple in succession, which you probably will do, it's very easy to forget your loadout. Your items are all clearly displayed and look unique even if just in small ways. Still, in the midst of a few runs it can be pretty easy to forget that this chest piece, for example, isn't the one that protects from explosions like you were just wearing in your previous run. This can often cause early and frustrating deaths. Being able to jump straight back in immediately for a new run helps mitigate the frustration, but dying doesn't always feel fair. There have been a fair few times where I haven't totally understood why I died, whether it was because of different effects chaining together or unexpected damage--it all happened too quickly to be sure what exactly went down, despite the helpful end screen that tells you what technically dealt the final blow.

But I also get the impression that's absolutely part of the point. Ring of Pain doesn't exactly hold your hand. It does a good job of generally telling you what your actions will do by showing the damage you'll take and inflict, but it doesn't account for everything. You'll often need to die to a creature to learn about it. For example, there are some that transform after a few turns and suddenly block your exit, and running into them the first time without knowing is deeply frustrating.

You'll eventually come to learn what might await when going through different doors, but there's no real explanation or guarantee. The shrines you stumble across in safe yet still somehow unnerving areas will often have to be used, sometimes multiple times, before you discover what they mean. There's a nice sense of proficiency that comes from learning these things, but it's not without frustration. I'm still not entirely sure about what the endings mean, what this world is meant to be, or much at all, really. But while Ring of Pain is dark, esoteric, and obscure, the gameplay loop is simple and satisfying in ways that allow it to still be fun--even once you're a bit past the intrigue.

Ring of Pain is interesting and enjoyable in ways that can keep you enthralled despite doing almost the exact same thing for hours. The quick runs are really nice for just jumping in and having a few goes rather than oversaturating yourself with this world. It nails the creepy aesthetic from the art and sound design right down to the way it plays. It can make you feel a bit unsettled no matter what stage of the game you're at and how confident you're feeling. Ring of Pain swings between frustration and satisfaction but thankfully leans heavily to the latter most of the time. It's a delightfully disturbing mix of roguelike and card game genres that's worth stumbling in the darkness to discover. 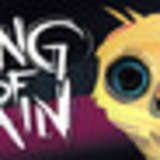 Hope played Ring of Pain for 10 hours. Review code was provided by the publisher.