The familiar voices from RiffTrax have their own game where you and your friends can make a robot do fart noises.

RiffTrax is the successful version of your favorite pastime: hanging out with your friends and making fun of bad movies. Combining that with the party-game genre, which has largely been dominated primarily by Jackbox Games, makes sense. RiffTrax: The Game allows players to write their own comedic lines to accompany clips from bad movies. Are you and your friends witty or do you rely primarily on the fallback of making a robot voice say "f***" and "shit" to get your laughs?

RiffTrax: The Game is essentially a spiritual successor to developer Wide Right Interactive's What The Dub but with the added voiceover work and witty writing of the RiffTrax crew: Michael J. Nelson, Kevin Murphy, and Bill Corbett. You may also know these voices from the '90s TV show Mystery Science Theater 3000 as Mike Nelson, the second Tom Servo, and the second Crow, respectively. The multiplayer party game features over 250 movie clips, many of which come from RiffTrax classics fans will be familiar with like Plan 9 From Outer Space, and allows for 1-6 players to participate, in addition to audience members who can watch and vote for their favorite jokes.

Much like RiffTrax and MST3K, the goal of this game is to make jokes while clips from bad movies play. Much like the various Jackbox games, this is a game to play at parties, and participating only requires a phone, tablet, or even a desktop, so it's available to everyone with an internet browser. While the overall goal of getting the biggest laughs remains the same, there are two modes of play for RiffTrax: The Game: Pick a Riff, where you choose from a small list of pre-written lines, read by the RiffTrax team, and Write A Riff, where you create your own funny lines. Points are tabulated throughout the game, and the winner at the end is the person with the highest score. If you've ever played one of the many Jackbox games, you're familiar with this format.

Pick A Riff has many issues, the biggest of which is that it's simply not fun to play. You have six ostensibly humorous lines to choose from for each scene, all of which can be swapped out once. But you're otherwise stuck with those for the entire game despite the fact that your choices are a crapshoot. More often than not, the choices you're given don't fit the scene. In addition to competing against other humans, there is also a bot that delivers one-liners--and the bot's choices always fit the scene exceptionally well, which becomes increasingly frustrating as a player. On occasion, you'll get a riff that could kind of work for the scene, but it rarely feels like there's flow or what you pick works for the scene. And it ends up that the only thing worthwhile is hearing Nelson, Murphy, and Corbett read the lines you choose. But where is the fun in that? You're just better off watching RiffTrax instead.

Where the strength in RiffTrax: The Game lies is Write A Riff. The most entertaining aspect of this mode is that you can add in sound effects to your answer--which was also part of What The Dub. So if you want to hear a mildly-robotic voice read "Papa's got a brand new bag (Fart) (Wilhelm Scream)," you can do that in every single round. But all the sound effects in the world don't matter if the game isn't fun, and in playing through with fellow GameSpot editors, Write A Riff tends to be a lot of fun. Additionally, there's the challenge of trying to come up with something that's witty and relevant to the scene within a short amount of time--as each person has a ticking clock in front of them--and you try to avoid typos. However, when the robotic voice reads your line, and there's a typo in it, that's hilarious in itself. There's also the idea that you're playing to a specific audience. While one group of friends may love fart jokes and all the cussin' they can handle, other players may look for something a bit more intellectual. There's multiple layers of strategy in order to make sure other people vote for your riffs. There's also a lot of longevity to this mode, as in our playthrough we never got the same clip twice. In Write A Riff, there are lot of laughs to be had while adding in one liners to bad movie clips--Pick A Riff never gets this feeling, even with multiple players. And that's what you want, right? Lots of fun.

There are drawbacks to both of these modes. At times, the clips can be a little long, and each person's joke is preceded by the video playing in full, something that happens every round. The issue wasn't persistent, but it did ruin the flow and fun of a game if four of you are playing and each clip is 7 seconds long and is played five times over--once for every player and the Riffbot.

You can play alone if you want to take a long, dark walk down loneliness alley. Was that a walk I took during this journey? You bet. The most insulting thing about playing alone is that the Riffbot was removed, along with the voting and the points. It is quite possibly the saddest solo game you'll play all year. It's just you, your phone, and bad movie clips where you're trying to write jokes for yourself. Sure, you can stream this on Twitch and make your followers giggle at your fart jokes and Wilhelm Screams--which is the best way to play--but playing alone is not the right way to go, as this is a game that needs an audience.

This is a game made for streaming on Twitch. There are a plethora of options available to make you have all the control over the game and the stream. Wide Right greatly understands the appeal this game has as a streaming event, which is great for that audience..

RiffTrax: The Game fits well into the party game genre and is a nice follow up to What the Dub, but ultimately, half of the game (Pick A Riff) isn't worth your time. The inclusion of the RiffTrax team is exciting to those who are a fan of RiffTrax and its lineage, but if you're not familiar with them, then it's not really going to be a huge selling point. RiffTrax: The Game works very well if you completely avoid Pick A Riff and have a group of friends over--or online--and spend your evenings in the Write A Riff game. There's an endless amount of fun within group play that's simple enough to pick up and play. 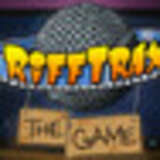 Mat is a longtime MST3K and RiffTrax fan who spent three hours playing the game, much of it by himself on multiple devices and window tabs like a maniac. He played the game on PC with a review code provided by the publisher.