Ridge Racer Unbounded is a dramatic departure for the series, but one that's filled with some gloriously destructive, fast-paced racing.

Ridge Racer Unbounded is, as its name suggests, Ridge Racer without limits. Your cars are no longer simple drifting machines, but tools of destruction, and the fictitious, urban tracks of Shatter Bay are your calamitous playground. Cars leap, streets explode, and buildings crumble, all while your competitors are turned into fiery, slow-motion heaps of wreckage. This is no mere update to the series. It is a declaration of change, one that confidently throws out the tried-and-true but rapidly aging formula of Ridge Racer to create a blend of all-out destruction and high-speed racing that's tremendously exciting, if not entirely original.

It's easy to see where Unbounded's influences lie: the crumbling cityscapes are lifted from MotorStorm: Apocalypse and Split/Second; the slow-motion takedowns are those of Burnout; and the fast-paced multiplayer action is akin to Blur's. But it's thrown together with a great deal of care. Your cars are varied, plentiful, and oh so shiny. You can pick from all manner of machines, some faster and lighter, others stronger and better in the drift. All have a unique look that mimics real-world classics, yet they retain the pseudo-futuristic style that Ridge Racer is famed for.

Their handling is a blend of old and new too. Drifting still plays its part, but gone is the on-rails feel of old, replaced with a much more dynamic and exciting system that rewards careful timing of the hand brake and judicious tweaks of the steering to make it around corners. Overdo the steering, and you slam straight into a wall. Undercook it, and you won't even make it around the bend. Put simply, you can't coast through drifts anymore. This makes them more challenging, but the rewards for such skilful manoeuvres are greater than before.

The boost bar that fills during drifts isn't just for bursts of speed; it's your primary weapon of destruction. Competitors can be turned into twisted heaps of metal with a well-timed boost to the rear, resulting in spectacular--if overly long--slow-motion wipeouts of flame and shrapnel. Buildings that stand in the way of a straight path down the track are ripe for your boosts too, exploding with a vigour that propels you out the other side in a display of broken glass and rubble that would be worthy of any great action movie.

Such displays of destruction are not only a treat for the eyes, but a key to your success. For every car you wreck, building you destroy, or lamppost you topple, there are points to be won. Even if you don't take a podium place during an event--though there is a bonus for doing so--your time on the circuit isn't wasted: the points you earn from destruction go towards increasing your overall racing level, which opens up new districts (tracks) in Shatter Bay, new cars, and new events. They include Domination races that reward destruction, Shindo races that reward pure racing skill, Drift Attacks that reward your ability to go sideways, and Frag Attacks that reward smashing your opponents into a wall.

Districts you unlock give each event a new lease on life, such is their variety. The dusty, crate-filled roads and tight turns of the Docks area soon give way to the towering concrete skyscrapers of the inner city, with drift-friendly roads, explosive trucks, and mesmerizing jumps making them a joy to race through. The outer city brings with it highways and tight tunnels for close-quarters shunting, while the addition of nighttime races adds more beauty to the already finely crafted and detailed tracks. A minimal HUD consisting of just a speedometer ensures you're given an unobstructed view of the city; finer details like position, lap times, and score are cleverly overlaid onto the environment itself.

There's a case to be made for the cleverness of the multiplayer too, which shuns a traditional lobby-based system for something altogether more personal. A track-creation system lets you craft circuit events to place within a city hub of your very own. You can set a score in any of your events and send it out to the world as a challenge, or grab a group of would-be competitors and go head-to-head in action-packed online races. It's a shame the track editor isn't a little easier to use, due to its flaky camera navigation and confusing tools for placing tunnels, but the resulting circuit designs already add a great deal of longevity to a game that has no shortage of tracks right out of the box. That's not to mention the sheer joy of fragging other players just as they're about to reach the finish line in first place, leaving them to wallow in a fiery mess of machine.

And really, that's what Unbounded excels at: balls-to-the wall, explosive action. Truth be told, it's Ridge Racer by name only and a massive departure from previous games in the series. But there's so much to like here, so much joy to be had fragging your opponents, so much creativity to be poured into the track creator, and so much stupid satisfaction to be had from blowing stuff up that you'd be doing yourself a great disservice to dismiss Unbounded just because it doesn't handle like you're used to, or because Reiko isn't there to mentally undress during loading screens. Ridge Racer Unbounded is much more exciting than that, and much more compelling than anything that has come before. There's no point in looking back. Instead, celebrate the fact that you've got a brighter, sleeker, and more explosion-filled Ridge Racer. It's one hell of a ride. 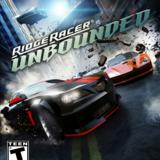