Ridge Racer offers incredibly poor value, with a lack of compelling content to back up its competent arcade racing credentials.

UK REVIEW--Being a video game fan can sometimes be a little frustrating. If it's not games saddled with archaic digital rights management or console manufacturers trying to figure out ways of killing the secondhand game market, it's publishers trying to squeeze more cash out of you with downloadable content. Most of the time, DLC is a great thing, giving you more of the content you love without having to shell out for another full-priced release. At other times, it's simply an excuse to gouge as much money out of you as possible.

Case in point: Ridge Racer on the PlayStation Vita. Its twitchy, drift-happy racing is still as fun as ever, but in an effort to sell you more DLC, the core game is devoid of content. There's no single-player campaign, a mere five cars, and just three circuits--all of which have been lifted from Ridge Racer 7. Even if you pick up the first set of DLC (free with the initial batch of retail copies, or until March 31 for digital downloads), you gain just a handful of extra cars and tracks--again all already featured in Ridge Racer 7. This means that even with all the extras, there's still little here to engage all but the most hardcore of fans.

The game's lack of content is apparent as soon as you open up the main menu. Its swishy, swipe-based interface looks pretty, but flick past the many options, ranking, and trophy icons to the section entitled "Race" and you spot just three entries: Spot Race, Time Attack, and World Race. Spot Race lets you jump straight onto a circuit with AI opponents, Time Attack lets you compete for the best lap time, and World Race features the game's multiplayer modes. Multiplayer consists of Ghost Car Battles (with lap times exchangeable via Near), Online Battle for up to eight players, or Face-to-Face Battle for local races via Wi-Fi.

None are particularly engaging, especially as there are just three tracks to race on, all of which come from Ridge Racer 7: Southbay Docks, Highland Cliffs, and Harborline 765. You can race them in reverse, but that's a poor substitute for different circuits or--heaven forbid--some brand new ones. They're not even especially attractive either, lacking any sense of personality or style. This is not the game to get if you want to show off your shiny new Vita's graphical prowess. Even with the added challenge of human opponents in multiplayer, the tracks get very tiresome, very quickly, with the lack of a proper offline campaign mode just adding to the boredom.

Instead, there are online objectives. At the start of the game, you're asked to pledge your allegiance to one of four teams. Each team is given a global ranking that is based on the number of players it has and the races those players have won. You're also given a daily objective, which should give you a compelling reason to race. Sadly, it fails miserably. All of the objectives, no matter how they're worded, simply boil down to "race against a player from this team and win." That's it. There's absolutely zero variety on offer; no missions where you have to use boost, no time trials, no overtaking challenges.

Score chasers will no doubt appreciate the online leaderboards and ranking systems, but there isn't much reward for climbing the ranks, aside from a hefty speed boost at the easily attainable rank two. Likewise, the CR points you're awarded after each race let you buy upgrades for your car, but they also top out early, with an updated nitrous pack being the most thrilling on offer. Many of the upgrades are rather useless "tips," which merely list some of the upcoming upgrades--hardly the biggest incentive for competing.

Ridge Racer's one saving grace is the racing itself, which sticks to the spectacularly unrealistic, drift-based handling of the series. There's no problem hammering the accelerator during straight sections and shallow corners, but if you hit a sharper turn, you have to initiate a drift by easing off the accelerator, turning into the corner, and accelerating again. Applying subtle nudges to the steering guides the drift, ensuring your car is facing in the right direction at the end. There's a fine art to the drift; steer too much and you spin out; don't steer enough and you careen into the sides. It's an addictive system that constantly keeps you on your toes during a race. Drifting also charges your nitrous, which gives you a temporary speed boost, adding a layer of strategy to races.

It's racing you've seen before, though, numerous times on numerous consoles, and little has been done to change the formula. Coupled with the scandalous lack of content and compelling incentives to keep playing, Ridge Racer feels more like a cheap cash-in than a fully thought-out product. There isn't even a single new track for longtime fans to enjoy. If it were a cheap download, then it might be worth a punt, but even at its slightly "cut-down" price, it's a complete and utter rip-off. If you really, really, really need a Ridge Racer fix on the go, then it might be worth your time. For everyone else, there are better and more complete racing games in the Vita's launch lineup. 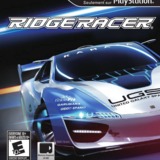 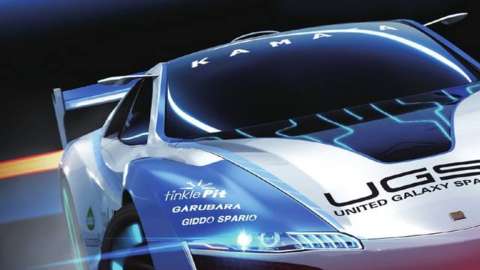 Ridge Racer makes its debut on the PlayStation Vita with this installment of the racing series.