Ridge Racer does a fine job of showing off the system's technical prowess while simultaneously providing more of the same smooth gameplay that still holds up after all these years.

Namco and Sony are now officially three for three when it comes to launching a new piece of Sony game hardware with a new game from Namco's Ridge Racer series. And like those previous Ridge Racer efforts, the first PSP installment in the series does a fine job of showing off the system's technical prowess while simultaneously providing more of the same smooth Ridge Racer gameplay that still holds up after all these years.

While the gameplay in Ridge Racer is certainly no slouch, the real treat to Ridge Racer on the PSP is how it looks. Or, to get more specific, how it moves. This is the smoothest-running PSP game on the block at launch. The frame rate never stops to skip a beat, and all this ties in to give the game a great sense of speed. You really feel like you're burning down the track when you unlock the faster cars. On top of that, the environments all look fantastic. The roads are sharp, and you'll get different lighting reflections on the road surface from sunsets and stuff like that. All in all, it's an impressive graphical showpiece. About the only thing missing is antialiasing.

Racing in Ridge Racer is fun. In fact, it's always been fun, so there haven't been many changes made here, which is good for fans of the series. However, the gameplay isn't going to convert anyone after a decade of minor changes. Collisions merely slow you down, and powerslides are still your primary means of moving around corners. The one key difference is that powersliding now fills up an onscreen nitro meter. When you fill one of your nitro stocks (you can store up to three boosts), you can unleash it at will for a modest speed boost. The opposing vehicles also will crack open a nitro stock from time to time, usually waiting until you're about to pass before coming at you. Beyond that, the driver artificial intelligence isn't terribly impressive. The 11 other cars in the race sort of follow their own lines and don't do much to block your pass attempts. This makes most of the game pretty easy, once you've mastered the art of the powerslide, but as you proceed through the world tour mode, the difficulty (and the speed) does ramp up.

Control in the game is tight. You can play with either the analog disc or the D pad, and due to the sort of digital nature of Ridge Racer, you can get by just fine with the D pad. Beyond that, you've got your gas, brake, and nitro buttons. You can also hit another button to toggle between a first-person or third-person racing perspective.

Ridge Racer is broken up into a few different modes, all of which are standard for the genre. You can just hop into a one-off race, or you can make your races count for something in the world tour mode. Here, you'll enter into increasingly difficult series of races. You can save the game after each race, so you won't have to make it through each series in one sitting. Winning a series unlocks new cars and tracks for use in the other modes, but the different cars don't make a huge difference beyond higher-class cars being much faster than the first models. The track designs are good, but in classic Ridge Racer form, the game opens and closes different sections of track to form "new" tracks, but the end result are some tracks that share 80 percent of the exact same blacktop. Aside from the world tour, you can enter a time attack mode or race against up to three other local players using the PSP's built-in wireless support. The multiplayer mode is a lot of fun, especially since the competition from other players is often stiffer than what Namco's drone drivers have to offer.

Another big part of Ridge Racer is another staple of the series. Ridge Racer has a fantastic soundtrack that fits right in with the previous entries in the series. In fact, you'll be able to select from a handful of different playlists. Some of these consist of all-new material, but you can also dig back into the Ridge Racer archive and hear new remixes of old Ridge Racer songs, or you can just go back and listen to a selection of music directly from the old Ridge Racer games. The series has churned out some really stellar electronic music over the years, and it's great to have so much of it packed into one place. It would have been nice if Ridge Racer featured some sort of more directly accessible way to simply listen to these tunes outside of the game, though.

If you already don't like the way Ridge Racer plays, this new installment won't convert you. It's still all about huge powerslides, almost never bothering to hit the brakes, and moving as quickly as possible. But if you're unfamiliar with the series, you should know that this is a great, fairly casual racing game that delivers where a racing game counts most: bucketloads of high-speed action. If you're already a fan of the series, you'll love the way the game plays on Sony's new handheld. Additionally, the stellar presentation definitely puts it up there as one of the most technically impressive games on the PSP. 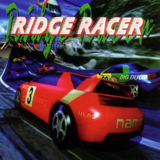