If you've played any recent Ridge Racer game, you know exactly what to expect in Ridge Racer 6--a slick, fast-moving racing game with interesting handling characteristics.

The Ridge Racer series began in the arcades, but it became synonymous with Sony's PlayStation line of game consoles. Each of Sony's three pieces of game hardware have launched with a Ridge Racer game right there next to it. The series has appeared on other platforms throughout history, but these have traditionally been a repackaging of existing Ridge Racer games. The Sony/Namco streak is broken now, because Ridge Racer 6 is now available just in time for the launch of the Xbox 360. The drift-crazy driving action is intact, as fast as ever, and comes along with a robust online ranking and racing system that breathes new life into the long-running franchise.

The racing and handling in the Ridge Racer series border on ridiculous. It's all about huge, perfectly executed losses of traction, which let you whip the tail end of your car out and slide around corners without having to slow down first. For the most part, if you're hitting the brakes in a Ridge Racer game, chances are you're doing something wrong. The cornering in the game is practically automatic, too. Once you've started a slide, all you need to control is the direction your car is facing. As soon as you can center it back onto your main direction of travel, it'll snap back into traction and start moving forward again. This means that you can whip around even the hairiest of hairpin curves without actually having to navigate the curve yourself. Just start the drift, and the game takes care of the rest. It's almost like a roller coaster ride that way. But the skill comes in making sure that your drifts are close enough to center to prevent you from losing too much speed. So you'll usually just want to barely slide out as you fly around turns. But there's still more to consider. In most race types, drifting adds juice to an onscreen nitrous boost meter that's broken up into three segments. Once a segment is full, you can bust it for a quick burst of speed. So there are plenty of cases where you'll want to keep drifts going for as long as possible, even if it means sliding out on purpose while heading down straightaways.

Faster drifts fill your nitrous meter more quickly, but you can't earn boost while nitrous is active. This creates a natural strategy of timing your boosts so that they expire just before a big curve, letting you burn off that excess speed with a long, fast drift that quickly gets you some more nitrous. That move's called an ultimate charge. The nitrous meter debuted in the recent PSP version of Ridge Racer, but here you can fill up more of your meter and unleash double and triple nitrous boosts, which are longer lasting and more intense--or, at least, they're faster than a regular old single boost. While it's all very simple on the surface, the game's handling can be quite demanding, especially once you get into tougher races and start driving faster cars. Above all, it's thrilling in the same way that previous Ridge Racer games have been. It's slow and easy at first, though the later races demand ice-cold perfection.

But by the time you get to those later races, you'll have seen every single track on multiple occasions, both forward and backward. The "world xplorer" mode, which is the game's equivalent of a career mode, starts you out with 111 races, but as you get to the end of its multirouted path, other, more-difficult routes appear on the map. There are hundreds of different events to choose from, but you're really racing on the same tracks over and over again, just in different car classes, in different directions, or with a slightly different rule set. Despite the almost immediate repetition, the world xplorer map screen provides just enough to keep you going with the constant promise of new vehicles as you complete races.

As you go from class to class, the cars get faster and sleeker, but the basics remain the same. There are different drift types to choose from. Mild drift cars tend to take turns normally and don't drift very much. Dynamic drift cars can't take turns too well unless you drift constantly. They also swing out much wider than the other classes, making it harder to keep them under control, and they have a higher top speed. The standard drift cars are a friendly sweet spot between the other two. They aren't usually much slower than dynamic drift cars, but they're much easier to control. The car designs aren't licensed, but the entire game uses fictional car manufacturers and designs based loosely on Namco's characters and games from throughout its 50-year history. So you'll see cars with Pac-Man on the side, or, if you're looking for a more modern reference, there's a car called the Mitsurugi Meltfire. The cars don't take damage in collisions, which is par for the course for the Ridge Racer series. Collisions with walls and other cars tend to slow you down a lot, but you can usually use nitrous to dig yourself out of most holes, provided you don't make big mistakes at the end of a race.

In addition to the world xplorer mode, there's a single race mode and a global time attack mode to play by yourself. Single race is pretty standard. Global time attack is a cool fastest-run challenge that posts your times for each class and track to an online scoreboard. The server keeps track of the fastest drivers and also lets you download and race against ghost replays of other players' performances. This is a fantastic way to learn the nuances of the handling, as the faster drivers out there know exactly when, where, and how long they need to drift to keep their speed up while still earning loads of nitrous. Uploading and downloading ghosts from Xbox Live takes very little time, which helps make the whole feature much more appealing than the average time attack mode.

While competing against ghosts and racing for the fastest time are cool, a more exciting aspect is the game's full-fledged multiplayer support, which can handle up to 14 racers, total, though the game always defaults to eight players. Like most other Xbox Live games on the Xbox 360, Ridge Racer 6 lets you select player match for basic racing or ranked matches if you want it to count. You earn points as you win races, and a global scoreboard keeps track of the point leaders. Since the player with the highest rank starts at the very back of the pack, the online racing tends to maintain some level of challenge as your skills improve. Performance-wise, the game seems to handle higher player counts pretty well, though that also seems to be a factor of the host's Internet connection. It may let you go all the way up to 14, if you want, but it probably defaults to eight for a reason. If Xbox Live isn't your thing, you can also play two-player games on a split-screen. This seems to work just fine, but it's not especially exciting.

If you look long and hard, you'll see a few flaws with the graphics. The textures on the car models are occasionally blurry. The road textures often don't look so great, and you'll see some aliasing here and there, but the game probably has the smoothest frame rate of any of the Xbox 360 launch games and a great sense of speed to back it up. When you get into the class four and special vehicles, you really start to feel like you're flying down the track. Also, the environments are pretty detailed. One track is set on an airport runway, and you'll see lots of jetliners around the course, including one that's cleverly decorated with the drum characters from Taiko Drum Master. One track has a large dinosaur statue, and another features a series of great-looking satellite dishes. There are even a few night courses in there that take you through a brightly lit city area, complete with tunnels filled with colored lighting. While the somewhat simple technical nature results in a game that might not always look better than other Xbox 360 games, the smooth frame rate really goes a long way, resulting in a game that looks great regardless of the resolution you're running in.

The sound in Ridge Racer games has always been focused on the music and the announcer. Both are back, and both adhere to that unmistakable Ridge Racer aesthetic. The music is a good collection of fast-paced electronic music, including the requisite Rotterdam-style gabber track, though there are also plenty of smoother tunes, including one that samples music and effects from Galaxian and Galaga, two of Namco's classic arcade hits.

The announcer is a real knucklehead. Well, Ridge Racer announcers are almost always real knuckleheads. But this one's really something. With the addition of nitrous to the game, the first lap of each race tends to consist of the 14 cars on the track jockeying for position and, usually, busting off with a whole lot of nitrous. And any time any racer near you does this, the announcer mentions it. "Here comes some crazy nitrous" seems like it's uttered at least three times per race, but there are plenty of other N2O-fueled lines of announcer dialogue, too. There will be spots where the announcer spits off three or four nitrous lines in a row, all in the course or 20 or 30 seconds. It's just weird, and even though there's variety to what the announcer's saying, it starts to sound repetitive quickly. You can eventually unlock an alternate announcer voice. The rest of the sound is functional, but not especially dramatic. The game's exhaust sounds are very subdued, for one, and the sound effect of tires squealing on the pavement as you drift is roughly the same sound every time. Considering some races have you drifting almost constantly, hearing the same squeals for hours and hours gets old quickly.

Ridge Racer 6 might not be the most impressive technical achievement on the Xbox 360 this year, but the racing is fast and rewarding enough to hook you in. And once you're addicted, you might not stop until you've unlocked every last race and car. Considering there are well over 200 races and over 100 cars, that's going to take some time. So if you're a fan of racing games in search of high-speed thrills both online and off, Ridge Racer 6 has a lot going for it. 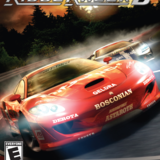