October is certainly the right time of year to release Rhiannon: Curse of the Four Branches. This eerie adventure about a haunted farmstead from Arberth Studios may be well out of date when it comes to game mechanics and visuals, but it packs a real punch when it comes to pure spooky storytelling. A tale steeped in ancient ghouls and a mystery drawn from Welsh mythology draws you in, even as the dated visuals attempt to push you away.

The setting is a farmhouse named Ty Pryderi, a rustic pile isolated deep in rural Wales. You play as Chris, a friend called in to house-sit for the Sullivan family after they hit a rough patch while restoring this old place to its long-ago grandeur. No, it's not dry rot that's causing the problems--their daughter Rhiannon has begun hearing voices and seeing disturbing visions, so mom and dad have hauled her off on a vacation while you keep the home fires burning and feed the cat. Only problem with this scenario is that Rhiannon isn't a lonely goth chick acting out because her parents dragged her off to a farmhouse a couple of hundred miles away from the nearest Hot Topic; she's actually a sane girl being messed with by ghosts, and they've now turned to rattling their chains at you in her absence. Cue the creepy music, disembodied voices, spectral apparitions, and so forth.

This saga isn't exactly original, but haunted house stories don't have to be innovative to grab you. A gripping yarn develops from the cliched premise, which actually draws a lot of inspiration from the Mabinogion, a collection of Welsh stories that date back to the pre-Christian pagan era. The main parts of this myth cycle are called the Four Branches of the Mabinogi, and one of the leading protagonists in these tales is the treacherous King Pryderi, son of the Welsh goddess Rhiannon. Anyone familiar with the convoluted stories in the Mabinogion will recognize the unsettling goings-on here, although the modern fright factor is ramped up to make you jump in your chair every now and then. A lot of personal touches are added to the farmhouse, including Rhiannon's diaries and e-mails, warm phone messages from mom Jennifer, and random notes all over the house left by dad Malcolm. The end result is that you really care about what happens to the Sullivans and want to save Rhiannon from a terrible curse by the end of the game.

The largely inventory-based puzzles in Rhiannon are devious enough to keep you on your toes. These problems are quite sensible and follow a logical progression. Encounter a darkened hallway, for example, and you can pretty quickly deduce that you need to use that light bulb you found downstairs on the nearest lamp. Find a book on trees, and you can bet the farm that you'll eventually need it to determine the difference between an oak and an elm. There are also a handful of logic-based brainteasers here, most of which are engaging, code-breaking jobs like translating an ancient inscription and figuring out various chemical mixtures and other formulas required to cast spells. All in all, this isn't one of the easiest adventures you'll play this year, although it never strays far from common sense and can be solved without resorting to a walk-through.

That is, as long as you take the time to explore every nook and cranny of Ty Pryderi, because some of the items you’ll need are very hard to find. Rooms are kind of like puzzles themselves, nestled with nearly hidden desk drawers, curtains obscuring vital items, and other cubbyholes that can easily be overlooked. You generally need to finish tasks in order, too. Objects typically cannot be picked up until you discover an actual use for them (although they can be handled, which at least lets you know that they will be useable at some point). This is good in that it prevents grab-bag adventuring and guessing at problem solving, but bad in that it forces a lot of backtracking for quest items. Having to trigger the ability to grab an item through uncovering a clue can also lead to confusion about what you're supposed to be doing at any given moment. You can think that you're on the right track yet be unable to acquire the items needed to move forward, kicking in some serious self-doubt. Before you know it, you're stuck. A lot of clues are scattered throughout the game, at least. And as most are buried in the midst of fairly dense letters, textbooks, and e-mails, reading these documents provides both vital gameplay information along with additional story depth and characterization.

Cheap production values are a blatant drawback. This game is a good decade behind the times, with graphics and sound so blatantly chintzy that they get in the way of the creepy atmosphere. Most of the scenery is bland and lacking in any sort of realistic texture or extra details. The Sullivans have apparently only recently moved into Ty Pryderi, but the house looks absolutely barren, more like a set for a student indie film than a real, lived-in place. Most of the farmland around the house has a more realistic, rustic appearance, although it can be hard to find your way around the property because the camera angle is fixed to static screens that you can't move. You move forward, back, left, right, up, and down solely by clicking on directional arrows, a clunky method that was annoying over a decade ago; you'll feel more like you're marching than walking. Audio adds little to the overall presentation. Sound effects and music are nearly nonexistent, an absence that actually works because the silence only enhances the eerie ambiance of wandering around alone in a haunted farmhouse. Music is just jarring when it does swell up, as all it does is announce that something ghostly is about to happen. Voice acting is mostly fantastic, however, although Chris never speaks so the dialogue mostly comprises creepy ghost voices and the odd recital of the contents of a letter.

Dated production or not, Rhiannon: Curse of the Four Branches sends chills up your spine as effectively as a good old-fashioned story about a haunted house. The measured pace and emphasis on painstaking exploration demands patience, however, so you have to put a fair bit of time into the game and let it get under your skin. 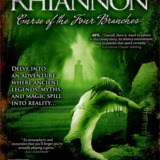