Some games are timeless. Rez is one of them. Set in a cyberspace landscape riddled with bugs, you guide your tiny figure on a quest to awaken the mysterious being lying dormant within in. To get to her, you must shoot through hordes of technicolor, swirling viruses that lob projectiles and try to block your path. But it's not the narrative that makes this game incomparable; Rez is a rail shooter on paper and a heart-pounding synesthesia joyride in practice.

Rez Infinite, the updated remake designed for the PlayStation 4 and PSVR, is still the same game as the original Dreamcast and PlayStation 2 version, albeit with a little more visual flourish. Backgrounds that were once hazy have been replaced with updated, crystal clear pieces of the cyberworld. Colors are brighter, lines sharper. Enemies drift in and out of your field of view with a new smoothness. And in VR, Rez Infinite allows you to dive deeper into its world in ways previously impossible.

To navigate Rez, you need only concern yourself with aiming and shooting, as you remain on rails moving at a set speed at all times. While holding down the X button you use the left stick--or in VR, the headset's motion tracking--to highlight the enemy or enemies with a targeting reticle, then release the button to fire your shot. Rez encourages you to chain hits together by cluttering your field of view with opponents, making picking them off one by one not an option. And this isn't as simple as it sounds, given enemies come flying at you from every direction at all once, and that's not even counting the additional projectiles they toss your way. Shooting sounds are replaced with claps or beats, and successfully destroying enemies results in a flood of musical tones. You can pick off your opponents in time with the beat, or create your own discordant melodies--it's entirely up to your own rhythm.

Occasionally you'll collect clusters of bright white and blue pixels that allow you to charge up. Collect enough of these and you level up, taking on a new form--for example, at one stage you evolve from a floating silver figure to a red and black figure seated cross-legged within a sphere. Additionally, collecting these white pixels and rare red ones charges up your Overdrive, a powerful attack that can clear the screen of enemies in seconds and comes especially handy during a boss encounter.

When rushing bosses, you must locate and target the core object of an undulating, vibrating cluster of tiles and lights to dismantle one area of the cyberspace prison. These are the most complex and challenging sections of Rez, and often include multiple stages. One boss collects squares around its core and takes on the form of a running figure that chases you through hallways. Another is a swirling sphere, with tentacle-like arms that break up and try to whip you as you fly by. These boss battles are also a visual treat, and with Rez Infinite's upgraded graphics it feels more like attending a rave in Tron than a fight.

And then there's Area X. Rez isn't about shooting and conquering, it's about creating music. And nowhere is this concept stronger than in a new mode unlocked after completing all five main campaign areas. Area X removes the rails and sets you off into space, allowing you to fly in any direction you wish. In doing this, Rez Infinite grants you more power in manipulating your space; you can fly closer to or away from enemies, skirt around giant structures shimmering in the surrounding darkness, or simply fly around in circles and let the beat play out around you. You can maneuver around the space in a way that lines up enemies and objects exactly how you want them, then unleash a torrent of tones following your own rhythm. I played through Area X several times and never found the same rhythm twice--going after the pink, squid-like enemies and leaving a giant flying dragon-like creature alone for a while produced a different sound that when I went directly for the dragon and followed it around the space, a tiny silvery shadow in its starry wake.

But playing the game in VR places Rez in what feels like its final form. In the original areas one through five, as you glide through these cyberspaces, you can look up, down, and behind you for a greater view of the world you inhabit. This new freedom of movement for your field of vision also allows you a second chance at enemies that have floated out of your path; in several cases being able to look directly behind me assisted in my takedown of a boss. This wider field of movement lets you more quickly dispatch enemies, and in this way it makes the game a bit easier (especially that pesky running boss).

But Area X in VR is the perfect coupling. I spent time flying off in the stars and gazing down on the musical chaos below me, before rocketing down and zipping between shiny pink projectiles as I moved in to pick off a particularly large enemy that dropped the beat as it dissipated into nothing. This feels like the natural evolution of Rez, and I have to imagine this could be how creator Tetsuya Mizuguchi saw his creation from the beginning. The full sensory immersion elicits a sensation beyond the simple toe-tapping and head-bobbing that comes from playing the original Rez. Rez Infinite's Area X in VR engages your entire body, thumping your synapses in time with the music and forcing you to move. I felt connected to my tiny being on screen, doling out a symphony with fireworks in my wake.

Despite it's short campaign--you can complete everything in a little more than an hour, if you're skilled--Rez Infinite is the game to buy a PSVR for. It's hypnotic and enveloping. And it's transformative, both within itself and in the wider scheme of the experiences made possible by VR. You don't want to sleep on Rez Infinite, because with the addition of more polished visual flair and the dreamy Area X, we have a new classic for the new generation on our hands.

Editor's note: We've now had a chance to test the PC version of Rez Infinite, including tests using both Oculus Rift and HTC Vive VR headsets. Rez Infinite continues to be a magical experience, and the PC version proves to be the best version of the game yet thanks to new control schemes and native support for 4K capable monitors. We have updated the score on this review to reflect this version of the game. - Peter Brown, Aug. 9, 8:00am PDT 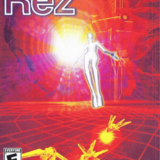 Alexa Ray Corriea completed all of Rez Infinite both in and out of PSVR for the purpose of this review. Code was provided by Sony. It was a wild ride.