The charms, variety, and authenticity of this unusual compilation of 8-bit-style games help it shine in spite of some flaws.

Video game nostalgia has been packaged and sold in a myriad of forms, but you've never played a throwback to the 8-bit era quite like Retro Game Challenge. It's an unusual concept that succeeds at feeling fresh and delightfully dated at the same time, and if you're old enough to remember the games of those bygone days, or you just have an appreciation for games from a simpler time you'll find a lot to like in this compilation of 8-bit games.

Retro Game Challenge bears the license of a Japanese TV show called Retro Game Master, but you don't need any familiarity with the program to appreciate the game. When you start the game, you're confronted by the bitter Game Master Arino, whose desire to dominate others in video games is matched only by his ineptitude at modern games. To get the best of you, he sends you back in time to his own living room in the 1980s and challenges you to complete a series of 8-bit game contests. You quickly meet the young Arino, who only needs to know that you love games to immediately consider you a close friend with whom he can spend hours in front of the TV. It's a wonderfully bizarre setup that lends itself to many great moments as the young, innocent Arino cheers you on in your quest to defeat his older, nastier self.

The games you'll play on young Arino's unnamed console aren't licensed but rather originals meant to capture the look and feel of games of the mid to late '80s, and they succeed very well. For each game, you're given a sequence of four challenges that typically start out very simple and get progressively more difficult, though they never approach the staggering difficulty of many actual 8-bit games. The challenges range from standard stuff like achieving a certain score or passing a certain level, to more unusual tasks, like getting through a specific level without using any ninja stars, or completing two laps around a track without drifting (which isn't as easy as it sounds). By constantly changing up your goals, the challenges alter how you approach the games and help to keep things interesting. Additionally, in a really great touch, young Arino is constantly buying game magazines that you can peruse at your leisure. They're crammed with all kinds of tips and tricks, such as high score strategies, secret codes you can input for extra lives, stage select options, invincibility cheats, and other benefits you can exploit to help you conquer Arino's challenges.

You'll start off with Cosmic Gate, a space shooter modeled closely on Galaga. Its straightforward insect-zapping gameplay is engaging despite its age, at least in the short bursts you'll spend with the game to conquer Arino's challenges. From there you'll move on to Robot Ninja Haggle Man, a charming side-scrolling action game in which you must defeat rooms full of swarming enemies with ninja stars, swinging doors, and, of course, head stomps, on a valiant quest to rescue a kidnapped princess. Then comes Rally King, a speedy top-down racing game with a fun drifting mechanic. This is followed by Star Prince, an exciting, frenetic thumb-buster of a vertical-scrolling space shooter. Conveniently, a controller with a built-in rapid-fire function (no doubt inspired by the NES Advantage joystick) is made available in-game not long after the release of Star Prince, so you can use that to spare your thumb if you're not hardcore enough to pound the button yourself.

Unfortunately, the variety of gameplay styles that kept the action compelling until this point goes out the window here for a bit, as your next two games are rehashes of earlier games and do little to differentiate themselves from their predecessors. There's Rally King SP, a special edition of Rally King that has some different track layouts but is otherwise identical to the original. And then there's Robot Ninja Haggle Man 2, which tosses you into bigger rooms with more enemies but does nothing else to advance the gameplay.

Thankfully, Retro Game Challenge saves the two most elaborate games for last. Guadia Quest, a surprisingly involved role-playing game in the vein of Dragon Warrior, is the game whose challenges will take the most time to complete. Guadia Quest mercifully condenses the level grind of the games that inspired it into a considerably faster process, but in every other regard it looks and feels like a very authentic late-'80s console RPG. While your characters will earn new spells and become more powerful at a very rapid pace, you'll also face extremely frequent random encounters with monsters as you make your way across the world map or navigate the mazelike passages of the dungeons, and there's no fancy automap feature to help you. Even back in the day, frequent random encounters could be something of a chore, but the constant development of your characters here makes those battles feel tangibly rewarding, and the turn-based combat moves along very quickly. Finally, there's Robot Ninja Haggle Man 3, a complete departure from the earlier games in the series that takes the bulk of its inspiration from the NES Ninja Gaiden games, though the level designs aren't linear and you'll have to do a fair bit of exploring to find the boss of each area. The open levels are both authentic, recalling games like Metroid, and somewhat frustrating. There's a good reason games today almost never drop you into levels without providing any indication of which way to go. Still, the action is enjoyable, and it's made more varied and interesting by the gears you'll find and purchase throughout the game, which Haggle Man can equip to improve his abilities.

Visually, the games within the game are spot-on in capturing the look of state-of-the-art computer entertainment in the 1980s, and while not a great deal happens on the bottom screen, the depiction of you and Arino sitting on the floor in front of his television as you while away the hours, controller in hand, is adorable. The sound is equally impressive. There are plenty of catchy tunes in the games, and Arino's surprisingly varied and appropriate reactions to your successes and failures help to create the sense that you really are playing these games with a friend sitting next to you, cheering you on.

After you complete the four basic challenges for a game, it becomes available in Freeplay mode, which keeps track of everything, from your high score to the number of times you've pressed the B button, though when you play the games on their own, they don't stand up quite as well as they do within the context of Arino's challenges. Retro Game Challenge is a strange offering, to be sure. Through one download service or another, most people have available to them many of the games of the 1980s that inspired this game's collection. But the story mode makes this something more than just a compilation of retro-style games. It makes it an endearing tribute to games of that era and the experience of playing them and enjoying them with friends. It's appropriate that Game Master Arino's first act is to turn you into a kid. While the games here have their flaws, the kid in you who once loved 8-bit games will be won over by the charms of this knowing homage to their glory days. 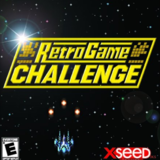