The ride's a little rough at times, but Retro City Rampage's blend of open-world action and 8-bit style is goofy, novel fun.

Back in 1987, when the NES was at the peak of its reign, the video game world was not yet ready for the open-world urban crime adventure. But today, a quarter century later, Retro City Rampage lets you experience what the genre might have been like if it had been introduced on that now-primitive platform. In terms of its gameplay, it's often not quite faithful enough to the games of the era that inspired it, and in terms of its difficulty, it's sometimes too faithful. But all in all, Retro City Rampage is an enjoyable experience in which old meets new to create something both fresh and familiar.

In Retro City Rampage's Story mode, you play as Player, a low-ranking henchman in a supercriminal's army. Following an introductory series of stages that references The Dark Knight, Mario Bros., Mega Man 2, Frogger, Bill & Ted's Excellent Adventure, Super Mario Bros. 2, Back to the Future, and much more, you're set free in the city of Theftropolis to spend your time as you see fit. You can complete story missions or ignore them, and spend your time causing chaos and competing in the score-based challenges scattered all over town.

Every mission in Retro City Rampage's Story mode skewers video games, movies, or TV shows of the 80s. If you have any reverence for icons of 80s pop culture, don't be surprised if versions of those icons show up in RCR and are made to suffer some indignities. (The Ghostbusters, for instance, are spoofed here as the Go-Go Busters. Their job is even messier and nastier than catching and occasionally getting slimed by ghosts.) Too often, the game is raunchy just for the sake of being raunchy, without any cleverness to actually make its off-color gags funny. But the game throws so much at the wall that, while most of it doesn't stick, enough does to make for a good number of laughs, and there's some particularly scathing humor about indie game development and major publishers.

What with the danger of being run over as you stroll down the sidewalk or being stomped on by criminals flying around in hover suits, Theftropolis doesn't seem like a nice place to live. It is, however, a pleasure to look at, particularly if you have a soft spot in your heart for 8-bit worlds. The pixelated residents of Theftropolis are a wonderfully diverse bunch. Despite being quite tiny, they have a good deal of personality, thanks to their vibrant colors, their big hair, and jaunty hats--not to mention their expressive animations as they strut down the street, breakdance or otherwise pass the time.

The city has at least as much personality as its residents. Everywhere you look, there are references on shop signs and billboards to 80s video games and other pop culture artifacts. For that extra dose of nostalgia, an impressive assortment of color modes lets you make the game look as if it's running on a wide range of 80s gaming and computer hardware; a CGA mode, for example, severely limits the game's color palette and dominates it with blue and purple, recalling the visuals on early Apple computers. There's also a fine selection of borders that can make the game look like it's being played on an old TV, an arcade cabinet, or other setups, with optional scanlines to help sell the illusion. Regardless of your visual preference, the catchy 8-bit music is sure to please, and would have been right at home in an NES game.

Unfortunately, as alluring as the city is, getting around Theftropolis isn't always enjoyable. Player moves sluggishly until he gets a bit of momentum going, and although all the vehicles around you are yours for the taking, many of them are too slow to be much fun to drive. Still, there are some speedy little numbers to cruise around in. The two driving control schemes let you select between an option in which you use a button to accelerate and in which pushing left or right turns your vehicle to its left or right regardless of which way you're driving onscreen, and an option in which you push the thumbstick up to move up, down to move down, and so on. This second, far less realistic option allows for more responsive, turn-on-a-dime controls and more enjoyable vehicular shenanigans as a result.

The Story mode's 62 stages sometimes reference specific games not only in their plot setups and characters but in their concepts, and this often ends up being a liability. One mission is modeled on Paperboy, for instance, but the controls don't feel anything like Paperboy. They feel like Retro City Rampage, and RCR's controls weren't designed for gameplay like Paperboy's, so the mission doesn't actually capture the feel, or the fun, of Paperboy. Players who are too young to remember Paperboy won't get any joy from the reference, and players who do remember Paperboy will be frustrated by the way the gameplay fails to capture what actually made Paperboy enjoyable. That's a recurring issue throughout Retro City Rampage's story mode. Its attempts to mimic Paperboy, Tapper, Contra and other games usually end up feeling wrong. The one exception is Smash TV, which RCR's controls allow it to passably imitate.

Like many 8-bit games, RCR's difficulty is inconsistent, and sometimes quite high. There are times when the challenge is welcome; the final boss fight can be thumb-blistering and rage-inducing, but when you finally get the pattern down, your victory is rewarding, and you come away feeling like, having mastered the battle, you could now win it again and again without breaking a sweat.

But at other times, the difficulty is simply unfair. On one mission, for instance, you need to follow the not-so-heroic superhero Biffman across town. The game humorously parodies the commonplace missions in open-world games in which you must tail other vehicles without getting too close or too far away. Player finds the task so boring that you must not only follow Biffman but must also frequently stop for coffee, lest the sheer boredom of the mission put Player to sleep. It's an amusing concept, but frustration arises when you must swing by a drive-thru restaurant. Sometimes, pedestrians mill about in your narrow path. Hit them, and the police are likely to jump on you, resulting in instant mission failure and sending you back to the mission's start. Wait for them to clear out and you lose Biffman, resulting in the same thing. Sure, such difficulty issues occurred often in the 8-bit era, but the extra layer of nostalgia doesn't keep them from being frustrating here.

But when it sticks to simple rampaging and havoc-wreaking, Retro City Rampage is goofy, cathartic fun. To use weapons, you can either press a button and make use of a lock-on system, or use the right thumbstick to aim and shoot as in a typical dual-stick shooter. There's an enjoyable variety of guns and melee weapons to use. Wild power-ups like speed shoes and unlockable abilities like a ground-shaking super stomp keep the action pleasantly absurd.

And outside of the Story mode, there's a good deal to do that benefits rather than suffers from RCR's retro trappings. There are secrets aplenty to discover in the forms of warp pipes to secret areas and cheat codes you can enter, among other things, which makes exploring Theftropolis a rewarding pursuit. You can stop by Nolan's Arcade to play a few simple but fun arcade games that reward you with content bonuses if you do well. And there are dozens of pick-up-and-play challenges which give you a quick burst of outrageous carnage and allow you to compete for a high score on the leaderboards.

You can also customize your character with a vast assortment of faces, tattoos and hairstyles, many of which have clever references worked into them. (Get the "Dennis Kooper" cut and you can finally live the dream of having hair like Dennis Hopper had when he played King Koopa in Super Mario Bros.!) Unfortunately, the in-game map doesn't show the locations of shops, so locating the barber shop or other store that had the particular cosmetic item you're looking for can take some time, until you have the lay of the land memorized.

Finally, there's the Free Roam mode, in which you can cavort around Theftropolis as Player or a number of other unlockable characters. And with one purchase, you get the game for both the PlayStation 3 and the Vita, complete with cross-play functionality that lets you swap your progress between platforms. Retro City Rampage is a good amount of game for your $15, and if you're old enough to remember the 80s, its shortcomings will be outweighed by the pleasures of jacking cars, spotting references, and discovering secrets in its enticing 8-bit city. It's appropriate that there are so many time travel references in Retro City Rampage. Like the cold response Marty McFly got from his failed attempt to introduce 80s-style guitar licks to the people of the 1950s, a game like Retro City Rampage might have been too much for players of the 1980s to handle. But now, its time has come, and it's well worth experiencing, warts and all. 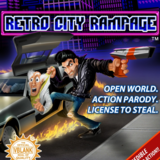