When the world you know is being overrun by ferocious hordes of murderous aliens, things can get frantic. The Resistance series has always done a great job of complementing its dire circumstances with equally fraught action, but in Burning Skies, both elements lack their usual luster. The story fails to capture the desperation of humanity's plight, and your Chimeran enemies attack with patterned diligence as opposed to the swarming intensity of Resistances past. There are some fun guns to shoot and a competent online multiplayer offering, but if Burning Skies is any indication of the fervor with which we would fight for our survival, humanity is in trouble.

The problems start with your enemies. From foot soldiers to jetpack jockeys and dog-sized arachnids to truck-sized berserkers, the Chimera are an ugly bunch that have a reputation for attacking in substantial numbers with startling ferocity. Their vigor has long fueled the frantic combat of the Resistance series, but in Burning Skies, the Chimera seem to have lost much of their appetite for destruction. Squads are smaller and less aggressive, and if you can find a solid place to take cover, you can safely potshot your way through most encounters. Move aggressively against an entrenched enemy, and you'll be in danger, but many enemies spawn in and take a few long seconds to fire on you, leaving you plenty of time to jog up to them and hit them in the head with your axe by tapping a conveniently located onscreen icon.

This lackadaisical attitude is exacerbated by the fact that the majority of the action takes place in corridors. From a visual standpoint, these areas are drab and repetitive; Burning Skies is not a pretty game. The dull industrial areas and ubiquitous blurry rubble do not make a good showcase for the Vita's capabilities. From a gameplay standpoint, the aforementioned corridors are perfect places to use your shotgun or melee attack, both of which kill in one hit. There's certainly some satisfaction in dispatching your enemies with casual efficiency, but Burning Skies spends too much time running you through these lopsided scenarios.

Fortunately, there are times when the balance swings back the other way. Later levels use the more spacious areas to better effect, and the variety and quantity of enemies demand that you sit up and pay attention. There's a light cover mechanic you can make use of by simply crouching behind a low barrier or sidling up to a corner wall, letting you poke your iron sights out to pick off your advancing foes and allowing you some breathing room to make better use of your enjoyable arsenal.

Series standbys like the carbine, bullseye, and auger return, bringing with them regular bullets, bullets that can home in on enemies, and bullets that can travel through walls, respectively. Though Burning Skies doesn't debut any particularly clever or brutal weaponry like Resistance 3 did, the new shotgun/crossbow combo is handy at close range, while the burst fire rifle and its auto-targeting drone can help you control a large room. Effectively taking down the more formidable waves of foes usually requires juggling different weapons while repositioning yourself and slinging a few grenades for good measure. It's a gratifying feeling to pile the ferocious dead at your feet.

The more creative (and more powerful) secondary fire options on each weapon make your eight-weapon arsenal feel bigger than it really is, and the upgrade options can help you pack an extra punch. The dual analog sticks of the Vita are perfectly suited to the first-person action, though tapping the screen to trigger your secondary fire or to throw grenades definitely takes some getting used to. At first it's awkward, and you might have a few misfires while attempting to tap onscreen prompts, but before long you get the hang of it, and it works just fine. There are even some weapons, notably the bullseye, for which tapping is actually an easier way to take advantage of their full capabilities (that is, tapping enemies to tag them rather than getting them in your sights and pulling the trigger).

The short campaign takes place during the invasion of New York City. This is the first time the US has suffered direct Chimeran aggression, and there are some interesting glimpses of the preparation and misinformation campaigns that preceded this inevitable event. Quasi-animated comic images chronicle the chaos between missions, but jagged edges and ghostly geometry clutter up these simple sequences. You play as Tom Riley, a firefighter who just wants to save his daughter, his wife, and every other human he encounters (hello, contrived campaign detours!). His one-note humble heroism shtick is boring, and his homegrown militia companion, Ellie, does little to liven things up. Even the return of radio man Henry Stillman is a disappointment; his heart-wrenching monologues in Resistance 2 evoked the despair of a country overrun, but here, his by-the-book broadcasts fail to channel the panic of a nation under attack.

Once you've completed the campaign, you can go back and battle through it on a harder difficulty level, but your increased fragility doesn't do much to improve the action. Going online for some multiplayer competition is a good way to find a more dynamic challenge, though the options are limited to deathmatch, team deathmatch, and survival (every human is converted to a Chimera when killed until no humans remain). Up to eight players can compete on an array of small, well-designed maps. As you earn experience for success in battle and level up, you unlock all the weapons from the single-player campaign, and experience-boosting "infections" that pass from player to player can speed your progress.

Though fairly basic, the multiplayer action in Burning Skies is solid and satisfying. The array of weapons in play varies from game to game, and making good use of grenades, secondary fires, and salvaged firearms is key to success, especially when playing against higher level players with deadlier guns. You can die quickly and kill quickly, and this imbues the action with a welcome urgency. There are some issues that crop up, like missing sound effects and inconsistent explosives, but on the whole, this compact multiplayer suite delivers nicely.

That is, if you can get into a match. Pre-release multiplayer sessions yielded hours of entertaining matches with no network issues, but retail release has put a serious strain on Burning Skies. In hours of trying, we were only able to join one active lobby, and similar matchmaking issues are widely reported.

Technical issues may abate, but this entry in the Resistance series still falls well short of its pedigree. Burning Skies leaves little doubt that the Vita is a comfortable home for first-person shooters, but the platform's first FPS is disappointingly dated. Toothless enemies and simplistic level design make for tepid campaign action, and the solid multiplayer suite is too limited to be a big draw. There is definitely some fun to be had in Resistance: Burning Skies, but the series, the system, and the poor citizens of alternate-reality New York City deserve better. 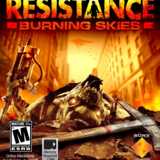 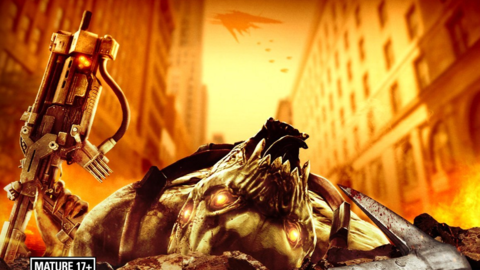