Resident Evil: The Mercenaries 3D offers addictive, score-attack action, but lacks the content to make it more than a fun minigame.

You play as one of a selection of series veterans (Chris Redfield, Jill Valentine, and the like) set loose on a smallish map to rack up as many kills as possible before the time runs out. More points are awarded for slaying enemies in quick succession. Precious extra seconds are awarded for smashing time-bonus crystals and up-close finishing moves, such as Chris' stomp and Jill's double knee drop. The enemies will be familiar to those who played Resident Evils 4 and 5; they are the monks of the former and the zombified villagers and soldiers of the latter. The ever-unnerving chainsaw majini and the executioner majini (the giant hooded chap with the colossal axe) also feature. The eight maps, too, will be familiar, likewise lifted from the last two games in the series, including an old castle, mine tunnels, and an African village.

The controls for combat work well, nicely replicating recent Resident Evil games' stop-and-shoot action and over-the-shoulder aiming on the 3DS. The circle pad is used for movement and the right bumper for popping into a laser-sighted aim view. For the most part, the game looks good, too, with detailed character models and scenery. Disappointingly, it falls down in animating baddies at long range; when you look beyond the majini about to chew your face off, you see distant enemies suffering some stuttery animation. Down on the touch screen, meanwhile, you can find the minimap and inventory, which holds your two or three weapons, health items, and grenades. Audio is passable, though you need to use decent headphones rather than the 3DS's speakers to make the sound useful for locating out-of-sight foes.

The arcadey score chasing is addictive fun, and the short, bite-sized missions make Mercenaries mode a good fit for a handheld console. For a pick-up-and-play blast of Resident Evil action, the game does deliver--at least, for the first few hours. The trouble is the lack of content. The initial offering is of just five levels set across eight maps, with a handful of missions in each level. In the absence of new baddies and environments, with maps and enemy types not only recycled from earlier games but also heavily recycled within the game, Mercenaries gets samey pretty fast.

The complete roster of characters has to be unlocked, as do their alternate costumes, by meeting various criteria: finishing a level with all high ranks, for instance. You also need to unlock each character's preset weapons loadout for use by other characters (though you can alternatively buy these with 3DS Play Coins). These feel like worthwhile unlockables but the 50 collectible medals, on the other hand, mostly feel like busywork included to make the scant content stretch further. You unlock one by playing every map more than once, for instance, and one for completing a mission without using the quick-turn move. In the way of novelty, though, there is a new skill system for customizing characters--to a degree. These skills level up with use, and each character has three skill slots. The luck skill ups resistance to instant kills, for example, and the medic skill makes health sprays more effective, while other skills improve proficiency with various weapons.

Most missions can also be played in two-player co-op in Duo mode. Co-op action, either over the Internet or a local connection, adds a welcome extra dimension to the limited selection of missions. Resident Evil 5's clunky inventory sharing is gone, replaced with just the ability to heal your co-op partner. There are also kicks to be had in producing satisfyingly huge chains of kills, via a shared combo counter. The online functionality stops at cooperative play, though; with the game's laserlike focus on high scores, its lack of online leaderboards is a frustrating omission. Maintaining a respectable spot on a global board might have been the one thing to keep some players coming back for more.

The strong co-op mode offsets the disappointing general shortage of content, but not completely. As a full-priced 3DS game, this is a poor deal. And, should you drain it dry, down to the last unlockable drop, it's not as though you can start over, thanks to the single, undeletable save file issue for which Capcom has caught so much flak. Mercenaries is still a compelling a minigame, built on the rock-steady foundation of Resident Evil combat. But it's still a minigame, however padded out with recycled material.

View Comments (5)
Back To Top
6.5
Fair
About GameSpot Reviews 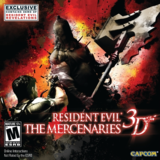 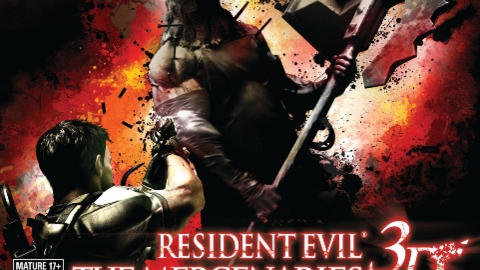 Set in the Resident Evil universe, Resident Evil: The Mercenaries 3D will deliver relentless action as players compete against the clock to defeat as many enemies as possible in a fixed time.

7.2
Sign In to rate Resident Evil: The Mercenaries 3D