Resident Evil is one of the coolest games for any platform.

Saturn owners: Welcome to the world of survival horror. If you don't already know it, Resident Evil is an action/puzzle horror game that was originally released in February 1996 for the Sony PlayStation. It was considered an instant classic by most critics, including myself. But how good is Resident Evil compared with today's games? Even though it's been nearly two years, Resident Evil still holds up and is now not only one of the best games for the PlayStation, it is one of the best for the Saturn.

The story unfolds in a way that seems more like a Hollywood script than the storyline of a game. It all starts out when the special tactics and rescue squad (S.T.A.R.S.) vanishes on a mission to investigate a town recently plagued by disappearances and bizarre deaths. Your team is sent in to investigate and is quickly set upon by hideous creatures. You and your team run for shelter in a creepy old mansion. From here, you start your journey as one of two characters, Jill Valentine or Chris Redfield. The only real difference between the two is the amount of items each one can carry at any one time. Ammo and health are scarce when you play as Chris, so it is harder to play as him.

Resident Evil isn't simply a zombie shooting gallery, but in fact is a real puzzle-solving adventure. You must guide your character through the different areas of the mansion, on a quest to find out what happened to the first team, and find your way out. You gain access to different areas of the mansion and its grounds by finding keys, solving puzzles, using your head, and using your guns. Resident Evil has some of the most logical puzzles in any action/puzzle game. For instance, you can't get by this giant mutant plant. To continue, you must go to the garden and get the weed killer. It's all really straightforward stuff that doesn't require you to be lucky - just smart.

Resident Evil's moods really set it apart from similar games, such as the Alone in the Dark series. It accomplishes this ambient feeling of fright with a mix of 3D polygon graphics and detailed 3D-rendered environments. You see all this from a third-person perspective that changes from fixed position to fixed position when moving throughout the game, giving it a movie look and feel. The character animations are excellent; on the PlayStation, the polygons looked a bit smoother, but not much.

The music and sound are genuinely half the experience in Resident Evil. For example, when you are simply exploring the mansion, the background music is this totally eerie horror flick music that keeps you in suspense. When you find yourself trapped with your back against the wall and eight zombies are about to start chewing on your head, the music turns into a loud, frantic you're-about-to-die ditty. But the sound effects really are what make your hair stand up on the back of your neck. For example, when a zombie has one bad leg and drags it behind him, it really sounds creepy. Although the sound effects sound great on the Saturn, they are a little better on the PlayStation.

The only problems with Resident Evil are the saving system and the camera angles. To save your game in Resident Evil, you must ink ribbons and take them to a typewriter. Of course, there are a limited number of ink ribbons, and the typewriters are few and far between, making saving your game super frustrating. The camera angles always seem to change at the most inopportune times, like when you step around a corner to shoot a zombie or when you draw a weapon.

Overall, Resident Evil is one of the coolest games for any platform. The Saturn version is no exception because it features a secret battle mode that lets you go from room to room blasting an endless onslaught of the undead. All Saturn owners who aren't too squeamish should do themselves a favor and pick up Resident Evil. 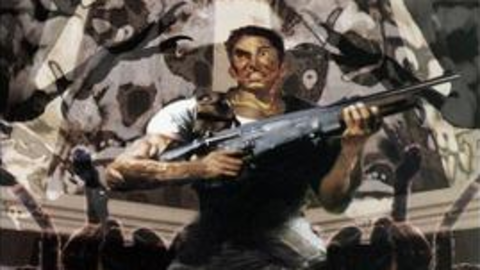