Resident Evil 5 is a fun and frantic evolution of RE4's breakthrough gameplay and the series' horror themes.

Thirteen years ago, Capcom helped revolutionize the action-adventure world with Resident Evil, a game that would define an entirely new genre dubbed "survival horror." In the years that followed, the series continued to build upon the standards set by the first game, until 2005, when Resident Evil 4 radically departed from its predecessors and broke new ground as a more action-oriented game. Resident Evil 5, the latest offering in the long-running series, expands on the action-heavy formula of its forerunner and is built from the ground up to support cooperative gameplay. Though it can no longer be considered a survival horror game, Resident Evil 5 manages to retain and effectively translate the most important aspect of that genre--tension--into its new mechanics, crafting a fun, collaborative experience that will keep you on your toes the entire time.

Ten years after the destruction of Raccoon City, former S.T.A.R.S. Alpha team member Chris Redfield is an agent of the B.S.A.A. This paramilitary anti-bio-organic weapon organization travels the globe to seek out and destroy Umbrella's creations, which have fallen into the hands of terrorists following the collapse of the multinational pharmaceutical company. When Chris gets a tip that a known weapons dealer will be making a big deal in the remote African nation of Kijuju, he heads there to put a stop to it and learn what he can about the mysterious doomsday project known only as Uroboros. Chris is joined by Sheva Alomar, a local B.S.A.A. agent, and together they battle wave after wave of infected villagers, horribly mutated monsters, and even series archnemesis Albert Wesker.

The core combat mechanics haven't fundamentally changed since Resident Evil 4--the action still unfolds from an over-the-shoulder perspective, certain battles or cutscenes are accompanied by brief quick time events, and you still have to stop moving to fire your weapon (though you gain a bit more mobility thanks to your newfound ability to walk sideways). Resident Evil 5's slow movement and gunplay take some time to get used to, and folks expecting a run-and-gun game may find the action too sluggish for their tastes. Fortunately, this slowness isn't really an issue within the game, because enemies are deliberate with their attacks and are better handled with a cool head and steady aim.

Regardless of how similar the combat in Resident Evil 5 is to its predecessor, the addition of a second character makes encounters feel quite different. Teamwork is necessary to take down more-powerful enemies and bosses, and having someone there to watch your back goes a long way toward keeping you alive. Furthermore, there have been radical changes to the inventory management system. The immersion-breaking briefcase from the previous game is gone, and enemies no longer politely wait for you to rummage through your things because bringing up your armory doesn't pause the action. At any given time, you can store up to nine items per character, four of which are bound to the directions of the D pad for easy access. This new system works extremely well and successfully conveys a sense of urgency whenever you go through your gear. It's often necessary to trade items with your partner, and keeping track of who has what at all times is crucial, because rummaging through your things while a boss beats on you is painful.

Sheva's artificial intelligence makes her a competent companion, though her degree of skill seems to rely more on her armaments than anything else--she is extremely good at using burst fire with a machine gun, for example, but tends to waste ammo when equipped with a handgun. That said, at no point does she feel like extra baggage that needs babysitting (unlike some of the series' previous companions), and she can hold her own in a fight. Sheva really shines when there's someone else controlling her. Resident Evil 5 supports both split-screen and online co-op play through Xbox Live and PlayStation Network, and exploring Kijuju with a friend greatly enhances both the experience and the fun factor. Every game has the potential to go multiplayer, since split-screen is as simple to initiate as hitting Start on a second controller, and other online players can join in on a free-for-all or invite-only basis if your game session is set up to allow this from the get-go.

Despite these conveniences, there are some frustrating hurdles that need to be leaped over before a partner can begin playing. Co-op isn't drop-in, so if someone joins, gameplay is interrupted and immersion is broken to some degree. For split-screen, this means immediately returning to the main inventory screen to confirm armaments and then restarting from the last checkpoint. With online co-op, it's a bit more troublesome, because the player who joined has to sit on the sidelines until the host either restarts from the last checkpoint or continues on to the next. Another major problem is that players' main inventories are isolated from one another, and though you can trade healing items and ammunition, weapons are off-limits for exchange, making some battles more difficult if you're playing with a less-well-equipped partner.

Resident Evil 5 isn't a survival horror game, but that doesn't mean it hasn't learned a great deal from the genre. Tension is the central element of survival horror games, and in the past it has been conveyed by the gloomy settings, the sense of isolation, and the frustratingly clunky camera angles and controls--all RE5 does differently is convey this feeling through other outlets. Having a partner introduces new types of tension, because you're forced to rely on each other's support, find ways to manage both of your inventories during battles, and cover larger areas since enemies can appear from almost anywhere. Waves of enemies wax and wane with just the right frequency, and while the brightly lit environments make them less scary, they can be tough to deal with because they attack in large numbers and are smarter, faster, and stronger than their counterparts in previous games. Major encounters and boss fights are doled out with excellent pacing, and since you're never sure what to expect around the corner, you have to remain vigilant. The active inventory management system helps keep that anxiety up as well.

RE5 is easily one of the most visually stunning games available, and its huge variety of environments are meticulously detailed in every way. There are lots of large, open areas, and you’ll constantly be on the move through them since there are usually so many enemies. In-game cutscenes are top-notch (though sometimes a bit over the top), and Chris and Sheva are incredibly well animated, especially their faces. Though the dialogue is often full of the series' trademark goofiness, the voice acting is competent, and when paired with the excellent facial expressions, it breathes a great deal of realism into the characters. Likewise, the fantastic orchestral soundtrack heightens the gameplay with everything from the low-key, ambient tracks that play during downtimes, to the frantic, upbeat songs that accompany the massive boss battles.

On the first play-through, Resident Evil 5 lasts about 12 hours, which is considerably shorter than its predecessor. Once you're finished, though, there's still plenty to see and do. There are hidden B.S.A.A. badges scattered throughout most levels to find; you can strive to get better scores or times in each chapter to show off on the online leaderboards; and there are three initial difficulties available with a fourth unlockable. In-game points can be spent on collectible trophies of various characters and enemies, on additional costumes and graphics filters, and on special infinite-ammo versions of guns that you've fully upgraded. Finally, the Mercenaries minigame returns in a format very similar to its last incarnation in Resident Evil 4 but with support for co-op.

Resident Evil 5 successfully builds on the foundation of its predecessor while taking it in a drastically different direction. Having a partner introduces new degrees of gameplay depth and dramatic tension that make the game that much more exciting to play. Though the slow, deliberate movement and shooting may not appeal to everyone, this new sequel’s frequent large-scale battles and co-op play still offer a fun and exciting adventure.

View Comments (19)
Back To Top
8.5
Great
About GameSpot Reviews 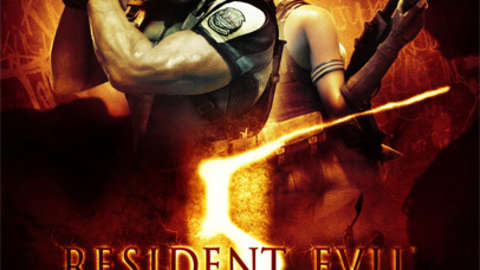