Quite literally, stay away from Reloaded at all costs.

Reloaded takes the original concept of Loaded, namely hard-core killing and gore, and takes it outdoors. Unfortunately, this isn't an improvement. When it comes down to it, Reloaded (actually, the entire Loaded series) is a horrible version of the Atari classic, Gauntlet - the main difference being the enemies. Instead of Gauntlet's massive, unstoppable swarms, Reloaded places a few green guys here and there, and then tosses in the occasional gun emplacement (to get your hopes up). Unfortunately, the gameplay never improves, meaning Reloaded is delivered to the Playstation DOA.

The top-down perspective from Loaded has been tweaked a little for this sequel, giving it more of a 3-D feel. The new look can cause problems, however, such as not knowing which parts of the level the player's character can walk on, and which parts are of a different elevation can or can't be reached. The graphics, while now rendered instead of sprite-based, are still quite bad and very pixelated, save the occasionally nice-looking blood splotch on the ground after ventilating an enemy.

In terms of gameplay, Reloaded also adds specific tasks that must be accomplished in order to complete a mission. In one, the hero-psychopath must collect three grubs and give them to a hippie before he'll fix the bridge, thus allowing the hero to pass. Accomplishing this task means the player must wander around the landscape, unsure of which hills can be scaled and which ones are too steep, looking for small green things on the ground. How exciting. Sometimes the mission objective isn't so clear, and simply walking down the correct path ends the level. Needless to say, this feature makes for some frustrating moments.

Titles like Reloaded make me want to sell all of my worldly possessions and hit the open road in order to get as far away from video games as possible. This is truly a gimmick offering: Take away the blood 'n' guts and all that's left is a pathetic excuse for a game, 32-bit or otherwise. Quite literally, stay away from Reloaded at all costs. 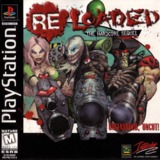 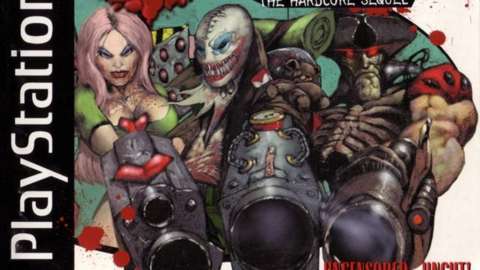 Quite literally, stay away from Reloaded at all costs.