The excitement quickly fades, leaving you with a game with unresponsive controls and lackluster action.

Reign of Fire for the PlayStation 2 is based on the 2002 film of the same name starring Matthew McConaughey and Christian Bale. The movie's plot pitted humankind against fire-breathing dragons that had become the dominant species on Earth. The movie was largely unremarkable, and its sometimes striking visuals were offset by the flat execution of its plot. This game is therefore a suitable rendition of its source material, as it sports some good graphics but little else. Reign of Fire isn't terrible, but ultimately, a number of glaring flaws keep it from being an enjoyable gaming experience.

At its core, Reign of Fire is a vehicular shooter. You drive around in a variety of different vehicles, each of which is armed with a number of different weapons and able to equip other weapons strewn about the level. The game uses a control scheme in which you control the vehicle's aiming cursor with the left analog stick, and the vehicle drives whatever direction the cursor is pointed. While this initially seems to be an effective control scheme, given the pace and style of the game's action, it quickly becomes unwieldy. You might find yourself wishing for some of the more established control schemes seen in other car combat games, as this scheme tends to be mushy and unresponsive, especially in the heat of battle. There is an alternative control scheme that maps the movement of the vehicle to the left stick and control of the aiming cursor to the right, but this scheme, used primarily in first-person shooters, makes even less sense in this context.

You will operate a number of vehicles, starting with a military jeep and then moving on to fire trucks, dune buggies, pickup trucks, and tanks. The first few missions of the game are fairly lengthy and chaotic. Your briefings just call for following the mid-mission orders of your superior, which basically boil down things like, "Go to this point and kill stuff," and "Now go here and kill more stuff." Later in the game, your objectives will be laid out at the beginning of each mission, giving them a more cut-and-dried feel. The dragons are the only enemies you'll face, and while there is a bit of variety to them--there are some that crawl, others that fly and breathe fire, and still others that charge at you and bite you--the variety wears thin quickly.

The game's visuals do a fine job of giving you the sense that you're in an all-out war, with countless dragons raining fire down upon you and your comrades and batteries of guns aimed skyward, trying to bring the beasts down. Even still, the action lacks a real sense of urgency. The progression of the missions doesn't seem to be directly affected by your actions. An ally might report that he needs help or is sustaining damage, but he doesn't ever actually die if you just wait it out. Unless you're set on fire, your vehicle can withstand numerous dragon attacks, so you'll often just feel like you're waiting for the missions to end and killing dragons to kill time. The friendly AI has a tendency to be pretty bad, too. In missions in which one of the victory conditions is to protect certain characters, they do very little to keep themselves out of harm's way, and if they're set on fire, they'll do nothing to extinguish themselves.

Toward the end of the human campaign, the game splits in two--you can opt to finish the missions allied with the humans, or you can choose to play as a dragon. While this initially sounds like a good twist that might breathe some replay value into the game, the control for the dragon is so stiff and awkward that it robs the dragon campaign of whatever fun it might have offered. You don't end up feeling like the extremely intelligent and agile terror of the sky that the dragons are made out to be, but rather a flying, fire-breathing brick. The most complex gameplay component of the dragon's control is its ability to swoop down and pick up certain vehicles in its talons and then drop them like bombs. In practice, however, performing the move while swooping down toward a vehicle does nothing most of the time. Roughly one in five attempts will yield an alternate camera angle showing the dragon flying in but coming up empty-handed, and the odds that you'll actually pick up the vehicle are even longer. Considering the fact that you'll need to execute this maneuver to pass certain missions, the awkwardness and difficulty involved in doing so gets tiresome and frustrating quickly.

To its credit, Reign of Fire looks pretty good for a PlayStation 2 game. The whole world has a great postapocalyptic feel to it, and the detailed levels are filled with scorched trees, burned-out cars, and deteriorating buildings. The vehicles kick up dust and ash when you accelerate quickly or make sharp turns, and the shadows of the dragons as they pass overhead adds an ominous feeling to the proceedings. The game's color palette borrows heavily from the one used in the film, resulting in a dark, drab, and washed-out look throughout. It bears mentioning that, as a multiplatform title, the game's graphics seem to have originally been tuned to the Xbox's superior graphics-rendering capability and then toned down for the PlayStation 2 version. Unfortunately, they weren't toned down enough, as the game occasionally suffers from some pretty severe slowdown. Additionally, the game uses motion-blur and camera-shaking effects whenever you sustain severe damage, fire a powerful weapon, or use the dragon's speed rush maneuver. The effect is so overused that it quickly becomes tiresome and gratuitous.

The game's audio is mediocre. Each vehicle has a unique sound to it, and while the various firearms sound pretty good, there isn't much variety in the weapon sound effects, so you'll be pretty tired of them by the end. When in a convoy, the rumbling sounds of vehicles are reminiscent of the tanks from Saving Private Ryan, which is a decent touch. The voice acting is delivered with a lack of conviction, however. Reign of Fire's orchestral score adds a feeling of purpose to the game, but most of the tracks are set on short loops and get rather grating by the end of each mission.

In the end, Reign of Fire is a fairly thin gaming experience. There is some occasional fun to be had, as some of the action sequences are exciting to take part in, and watching a dead dragon fall from the sky is an exciting sight. Unfortunately, this excitement quickly fades, leaving you with a game with unresponsive controls and lackluster action. 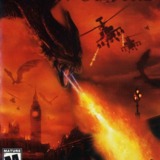 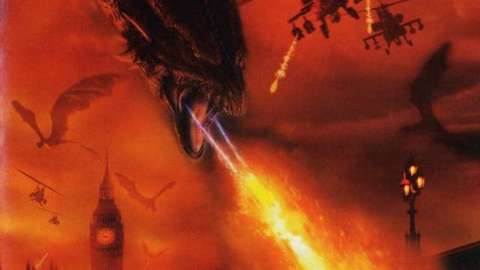 This movie-inspired action game from Kuju Entertainment will allow players to assume the role of a human resistance fighter or a dragon.