There are a lot of colorful, challenging 2D platformers on the market, so a new addition needs to shine brightly to stand out. Fair but rewarding difficulty, satisfying combat, and an interesting story are required to grab attention. Red Goddess: Inner World fails to achieve even a modicum of success in any of these categories. The narrative is convoluted and dull, the combat is unwieldy and frustratingly abundant, and the poorly designed platforming sequences make for some of the most infuriating gaming moments I’ve experienced in recent memory. Pair these failings with load times that are generous enough to let you both make and eat a sandwich before you regain control, and you have a platformer that’s unforgettable for all the wrong reasons.

Let’s actually start with something positive: jumping from place to place in Red Goddess feels pretty good. You start with simple platforming skills and build to double jumps, wall climbs, and more dynamic boost techniques that allow you to cover a significant distance. Like any good Metroidvania game, certain paths are inaccessible until you learn a specific punch or unlock greater verticality, and by the end, the sheer number and diversity of your abilities allows you to seemingly fly from place to place in a single bound.

Unfortunately, the environments often punish you for the tiniest of mistakes, and the platforming isn’t tight enough to keep up with the level of finesse that the game demands. Your long health bar, which only grows as you purchase upgrades, is useless once you’re faced with spikes, lava, and deadly foliage that causes immediate death, and the deeper you dig into the game, the more prevalent and difficult these obstacles become. Instant death obstacles are a frustrating inclusion on their own, but what puts it over the edge are the unbearable load times that can last as long as 45 seconds. In the grand scheme of things, waiting under a minute to resume play might not seem like the most egregious sin. However, being forced to stare at another loading screen after just barely clipping the corner of a spike at the end of an exhausting sequence that just killed you seconds before can be tortuous.

It’s the last 30 or so minutes of the game when this frustration boils over. Before facing the final boss, you’re presented with screen after screen of platforming misery where one false move leads to a quick death and, more importantly, yet another load screen. It’s these sporadic moments when you’re asked to make precise movements to avoid near minute-long pauses that mar both the pacing and the difficulty curve.

The combat isn’t nearly as unforgiving, but it isn’t any fun, either. The main character, a goddess named Divine, can quickly swap among three different forms: her basic, human-like Divine form, a fiery red Rage form, and a timid blue Fear form. Red enemies can only be beaten by Rage and blue enemies by Fear, so you need to shift quickly between bodies to deal with what’s in front of you. You can string together punches, uppercuts, and dashes into deadly combos, but little skill or grace is required. However, when things get more hectic and five or six enemies attack at once, the battles go from dull and sloppy to frustratingly chaotic. The combat doesn’t work with large skirmishes, where creatures of all shapes and sizes surround you and can send you flying into the air and out of your combination with a single blow. One wrong move can have you continuously batted back and forth between enemies like a human tennis ball until the sweet release of death and--yes--another damn loading screen.

There’s not even a compelling story to help drag you through the maddening platforming sequences and unsatisfying combat. The game is set inside Divine’s subconscious, where she’s searching for not only her own identity but also for the source of what’s haunting her. Her mind and soul are being broken down from the inside, so you must uncover memories and repel negative thoughts to save Divine from herself. That, in itself, is a fascinating concept, but it never really goes anywhere interesting. It looks and feels like your everyday fantasy world, and moments when you explore the memories of Divine’s fuzzy past turn out to be little more than quick, uninformative combat sequences that fail to add much to the narrative. The shoddy narration and uninspired writing of the various NPCs do little to keep your attention, and it’s easy to lose track of what’s going on among all the psychological metaphors and allegories.

To make matters far more frustrating, the game has a tendency to simply not work. On more than one occasion, I ran into a situation where a door wouldn’t open or an important character wouldn’t move, forcing me to restart the game to fix the scripting. There are also stretches of time where there’s no music--be that unintentional or not--and you’re left to listen to little more than the unappealing grunts of Divine punching her way through another grueling combat sequence.

Red Goddess: Inner World gives you many reasons to put the controller down and walk away. The later platforming sequences are frustratingly difficult, the load times are excruciatingly protracted, the combat is sloppy, and sometimes the game just breaks. Jumping up walls and across crevices can be fun, but that's not nearly enough when everything else is such a chore to play. 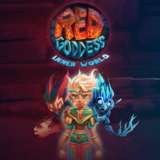 Josiah Renaudin loves platformers of both the 2D and 3D variety, citing Super Mario World as the greatest game of all time. For the purpose of this review, he (begrudgingly) made his way through Red Goddess and defeated the final boss. 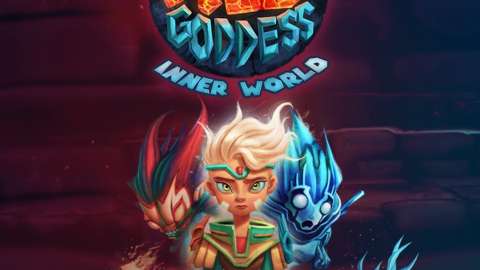 Red Goddess is a 2.5D nonlinear side-scroller platformer with combat situations in an adventure to explore the inner-mind of a Young Goddess with the objective of remembering and recovering her own powers.