As is no surprise to anyone following the history of video game licenses, the game offers mediocre gameplay whose few innovations are overshadowed by the half-baked quality of the game's control and graphics.

Electronic Arts is responsible for this license of the kid's television show ReBoot, made by the same folks who brought us the Beast Wars Transformers show. Like the show, this 3D shooter is about a team of cyber-people living in a virtual world called Mainframe, who must defend it from one of the silliest- monikered villains in recent memory... the dreaded "Megabyte." As is no surprise to anyone following the history of video game licenses, the game offers mediocre gameplay whose few innovations are overshadowed by the half-baked quality of the game's control and graphics.

The game's standard-issue 3D over-the-shoulder (and sometimes behind-the-back) shooting engine should feel familiar to most of us by now. The D-pad controls forward and backward motion and left and right rotation. Strafing is accomplished with the L1 and R1 buttons. As Bob, you wander around the 3D world, blasting bad guys and gaining power-ups, new weapons, and health bonuses. In addition, it's your job to repair tears in the cyber-fabric. These are represented by glowing crystalline orbs that are both deadly to the touch and have a nasty habit of sucking you in - as well as shooting off powerful beams of energy. To make matters worse, when one appears, you're given a mere few minutes (complete with onscreen countdown) to get up close and personal and use your special tear repair gun - called a "glitch" - to mend the tear. This is a sticky process and usually involves holding the glitch beam on target for several moments while the tear's volatile energies make it difficult for you to stand up, not to mention frequently sending you flying across the room with half your life energy missing.

Further complicating matters is your means of transportation. Rather than simply running around the gameworld on foot, you use something called a Zipboard (which looks like a disc attached to each foot, with a cord running between them) to sort of half float and half skate your way around. Unfortunately, control of the Zipboard is sloppy and difficult to master at best, and once you start off in a particular direction, it's not always easy to stop. Over wide-open, flat surfaces it's difficult to get where you want to go by the most direct route, since you're constantly veering off course, reorienting your direction, and backtracking. Throw in a few obstacles and some narrow causeways, and you're bumping into stuff left and right, and falling off ramps, often plummeting back to ground level just when you've almost made it to the top. Luckily, the Zipboard also prevents death by falling, since it's continually emitting an infinitesimal vertical force. It really gets ugly when you're attempting to hold a tear on target and it keeps swatting you around, making you lose the shot, and sending you and your dumb Zipboard spinning off. You can't help but feel that if you just had regular shoes on instead, you could just take care of business and be done with it.

Why is it that games and movies about hi-tech cyber-beings living inside computers don't have better graphics? As with everything from its predecessor Tron until now, ReBoot tends to settle for large, brightly colored geometric shapes in lieu of detailed textures or color. "But, dude, they're inside a computer. It's trippy." Humph. Perhaps the auspices of techno-kitsch make that excuse work for Tron, but ReBoot just doesn't deal well with the paradox. A low frame rate and ample polygon dropout reveal the game's true low-tech nature. It's plagued with camera troubles, too - all too often the jump you need to make is to a platform that you can't quite see from where you're standing - and the game offers no player-controlled camera tweaks.

ReBoot might be interesting to fans of the TV series, but as a stand-alone game left to its own merits, it just doesn't fly. The sketchy graphics don't tell you all you need to know, and from a design standpoint the levels are uninspired - though fans of the show will like the cute animated cutscenes featuring other ReBoot characters. Most importantly though, it's the game's awkward control that sets a new benchmark for frustration and will doubtless cause many players to throw their controllers across the room, turn off the PlayStation, and never reboot this one. 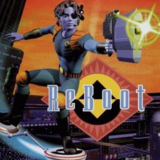