Rebel Assault II is a great rental, but a terrible purchase.

The original Rebel Assault became one of the best-selling CD-ROM games ever, despite the repetitive shoot-em-up gameplay. Rather, Rebel Assault was a hit because players could become a character in the eternally cool Star Wars universe and engage in activities straight from the movies. John Williams' rousing musical score didn't hurt the game either. And now there's Rebel Assault II - a game that's more of the same, only revved up for the more powerful hardware of 1997. Destined to part Star Wars freaks from their money, Rebel Assault II for the PlayStation boasts live-action footage that is even prettier than it is on the PC. In fact, its gorgeous 16-bit color and true CD-quality stereo sound throughout provide all the ear and eye candy a player could want. But then the game has to be played, and that's where the Star Wars luster begins to fade.

Rebel Assault II uses four different gaming perspectives and casts players in the role of a young Rebel who must fight valiantly against the evil Empire. Players will find themselves in the cockpit of an Alliance vehicle, blasting TIE Fighters. They'll be on the ground, shooting Stormtroopers and ducking behind walls to avoid being frazzed. They'll use a third-person perspective (a "chase" view) to drive vehicles through dangerous battlegrounds. And some levels will have players engaged in a first-person Doom-style battlefest to take down the Imperial scum. In all of these perspectives, the goal is to shoot Imperial targets, early and often. Alas, it's only fun for a few hours and tedium thereafter. The different sequences simply aren't different enough provide anything resembling a high replay value.

There's also a serious gameplay problem in the vehicular levels. The controls are too loose and jittery, meaning that you have to constantly fidget with the directional pad just to fly in a straight line. This also makes it almost impossible to dodge obstacles in your path. An even larger flaw is that, even with that awful control, the game is still much too easy to vanquish - any average player should be able to rip through it in two or three hours.

As for the much-hyped live-action video, it's poorly acted and not even remotely worthy of being compared to the real Star Wars movies. Let's be honest: LucasArts filmed unknown, unskilled actors who played dress-up with costumes from the storage closet. Rebel Assault II is a great rental, but a terrible purchase. If you're a Star Wars fan, your money is much better spent on the Star Wars Trilogy videotapes or tickets to the big-screen director's-cut re-releases. 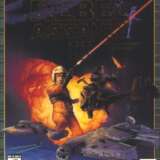