Don your big yellow hat and venture into burning buildings in this engaging firefighting simulation.

Playing as a firefighter in Real Heroes: Firefighter obviously isn't as grueling as facing down flames in real life, but this Wii game is as close as most of us will want to get to donning protective clothing and hauling around a giant hose. Developer Epicenter Studios has taken the formula for a first-person shooter and grafted on firefighting mechanics, turning a simple design template (and budget-looking packaging) into tense expeditions into burning buildings. A few issues with the wrist-twisting Wii Remote controls make the game more of a slog than it needs to be at times, but the lengthy, nicely scripted levels keep you immersed in the action even while your hand starts to ache.

Essentially, this is a standard Wii first-person shooter where enemies have been replaced with fires. Instead of gunning down monsters, you haul around hoses and fire extinguishers to put out roaring blazes, hack down doors with axes, wrench open boxes with a pry bar, and rescue civilians before they succumb to smoke inhalation. All actions are handled with the Wii Remote and Nunchuk. You move a cursor around by pointing the remote and then move with the nunchuk's thumbstick. Motions are mimicked with the remote. So when you need to smash windows with your axe to let out smoke, you simply hold down the B button and swing the controller forward. When you have to open up a car with the Jaws of Life, you do so by twisting the remote until you line up onscreen cursors and then jab it forward to plunge the hefty hardware into place.

Most of these movements are easy to pull off and are pretty satisfying. There's something very cool about putting out fires with a hose and smashing things with an axe. The only problem is the overly sensitive cursor. This makes the remote unforgiving, forcing you to adopt a white-knuckle grip to keep everything on track. It's too easy to run into fires or slip a bit when lining up an action like hacking down a door and then wind up aiming at the floor. You get used to it after a while, although you need to have a strong wrist to endure the game's lengthy levels without taking breaks to ease the aching that this causes.

A cheesy, B-movie story serves as the background for Real Heroes: Firefighter, although you can ignore it and jump right into smoky buildings. You take on the role of a probationary firefighter with a city fire company and ride along to calls that serve as the game's nine single-player-only levels. All are large-scale industrial calls, so you're not getting any cats down from trees. You venture into a factory, a shopping center, a museum, and even a medieval theme park, all with the general goal of putting out fires and rescuing people. A lot of the game involves extinguishing fires in set locations. You smash into a room and soak everything while a meter on the right side of the screen ticks down showing your success rate. Another frequent pastime is cutting paths through blazing rooms to allow civilians to escape or fellow firefighters to get through to key objectives. You generally either direct people out by soaking a trail for them or cover other firefighters from a good vantage point while they perform rescue ops. You also man the big water cannon on pumper trucks when putting out large-scale conflagrations, much like you would take over a gun turret on a vehicle in a standard shooter.

Simple puzzles are common as well. Gas jets might be firing out of control, forcing you to dodge them in order to get to a control panel and shut them down. Electrical arcs might be firing off in all directions, necessitating that you quickly pry open a nearby breaker box and throw a lever. There are a lot of stock situations to deal with, and they do get a little dreary at times. Levels are long and you spend too much time simply spraying water onto fires over and over again. Still, most objectives are mixed up enough that you don't get too bogged down in repetition. When levels end, however, you've usually had enough.

The graphics are clear and reasonably detailed, despite the often smoky surroundings, although you're never free of pixelation and jaggies. There aren't a lot of frills here. You can wander the firehouse a bit in-between missions and upgrade equipment, but there isn't much of interest unless you're hepped up about changing the standard firefighter's axe to a medieval-looking equivalent straight out of D&D. The game also throws firefighting tips at you on the loading screens and even some old quotes and poems about firefighters that let you know the developers take the "Real Heroes" part of the game title seriously. Even though the script is loaded with cornball ribbing about your being a rookie, the lines are well voiced by pro actors like James Marsters, a cult favorite due to his portrayal of Spike on Buffy the Vampire Slayer, and John DiMaggio, best known as the voice of Bender on Futurama. You might as well be watching a straight-to-DVD action flick. Another nifty trick with dialogue is having your fellow firefighters speak to you through the Wii Remote speaker during blazes. They are a bit hard to hear, but the tradeoff is worth it because it gives these conversations a real walkie-talkie vibe. The music is more dialed back. It's generic movie fluff, rising and falling with the tempo of the game, and is pretty much forgettable five minutes after you put down your remote and nunchuk.

Despite its bargain-bin packaging and occasionally unforgiving controls, Real Heroes: Firefighter is a very respectable, unique take on life as a firefighter. Some of the levels are a little too long for their own good, and the action is repetitive at times, but there's a good amount of fun to be had here if your wrists are up to the job. 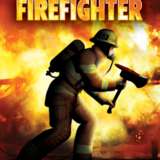 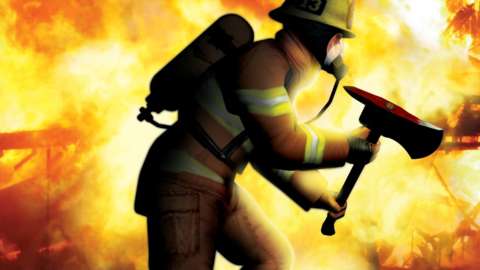 Take on the role of a rookie firefighter assigned to a busy downtown station and tackle emergency situations as they arise.