Rayman Raving Rabbids on the GBA returns the titular hero to his platforming roots, but the game is so rote and uninteresting that it's hard to care all that much.

On the PlayStation 2 and Wii, Rayman Raving Rabbids introduced a new style of Rayman game--a series of wacky minigames that revolved less around the armless platformer hero and more around the newly introduced villains, the rabbids. These buck-toothed, screeching rabbit creatures were some of the most endearingly silly villains put into a game in recent years, and the focus almost exclusively on them in those previous versions of Raving Rabbids is what made the games so much fun. On the GBA, Rayman goes back to his platforming ways, which by itself is a fine thing. The trouble is that the adventure itself is completely boring. The level designs offer little in the way of interesting gameplay, the controls are a bit spotty, and the rabbids have been relegated to generic bad-guy duty, showing almost zilch of the personality that made them so popular in the Wii and PS2 versions.

The premise of the GBA game is similar to that of the console games. Rayman is captured by the evil rabbids, who are hell-bent on taking over the world because they got tired of people being mean to them, or something. However, instead of taking on a series of minigames to defeat those vile rabbids, you'll instead find yourself in a middling platforming adventure, filled with plenty of jumping, mild combat, with the occasional minigame in between.

For the most part, nothing about Raving Rabbids on the GBA should be even remotely unfamiliar if you've played any platformer produced in the last decade or two. Rayman's abilities are initially limited to basic jumps, climbing, and flying fist attacks. Along the way, he'll pick up some new outfits that let him do things like leave carrots around to distract the rabbids, and do crazy stomps that knock certain platforms down a peg or two. These new abilities come into play regularly--maybe a little too regularly. To change outfits, you have to stop for a second, hold down the right shoulder button, then scroll over to the icon for the outfit you want using the D pad. It's not that you have to do this constantly, but it's often enough that it tends to break up the pacing.

The main flaw with Rayman's latest GBA adventure is that its roughly 25 stages are rarely much fun or all that challenging. Enemies don't appear frequently enough to really be much of a challenge; bosses tend to stick to some very easy-to-discern patterns; and the level designs themselves are the same brand of labyrinth over and over again. Every stage has an exit you need to track down, and along the way you'll find yourself navigating the same basic obstacles over and over again (spikes, water pitfalls, jumps that can't be made until you throw a giant ball at a spike in a wall and use it as a new platform, and so on). Even when the stages change aesthetic themes, you've still got the same pitfalls in front of you. Enemies change up a bit, but rarely do they ever require more thought to get past. Eventually the game starts trying to break up the monotony with the occasional race or shooting-gallery stage, but these aren't much better.

At the very least, Raving Rabbids does have a colorful look to it. You can't really call the graphics impressive, since the animation is a bit stiff and the environmental designs are pretty bland. But the characters look good. Rayman's as goofy looking as ever, and though the rabbids aren't given much screen time beyond basic baddie interaction, they're still adorably insane looking. Audio is similarly uneven. The in-game soundtrack is grating as all get-out, but Rayman's actually given some of his trademark made-up gobbledygook dialogue in this game, and it's nice to hear him talking again--even if he does just repeat the same few lines again and again.

As nice as it is to see Rayman platforming again after his foray into the world of minigame collections, Raving Rabbids for the GBA can't be called anything but a mediocre effort. There's little fun to be had, and the adventure feels tossed together. For the time being, you'll have to wait for a worthwhile new Rayman platformer. 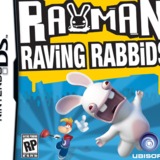 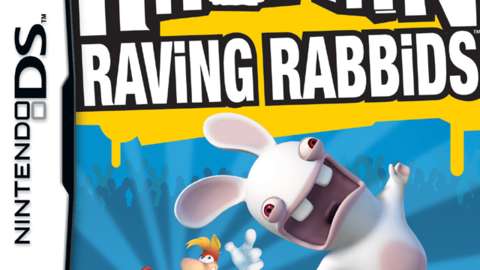 In the fourth installment of the Rayman series, you must help Rayman save the world from furry foes by busting out all his best moves.