Rayman Origins is a wonderful 2D platformer whose goofy charm will have you smiling all the way through.

Straddling a thin line between demanding and forgiving, Rayman Origins is a rare 2D platformer that owes a debt of gratitude to the past without being burdened by it. There's an unyielding level of difficulty bubbling beneath the surface of this terrific side-scroller, but it's complemented by a decidedly modern abundance of checkpoints and infinite lives so that your fate rests squarely in your own hands. Combined with a relentlessly charming art design that's equal parts absurd and beautiful, Rayman Origins is a platformer that gives you every last reason to keep running along in spite of any challenges you encounter.

Rayman Origins is a living, breathing testament to the artistic capabilities of a 2D canvas. Every one of the game's numerous landscapes is filled with rich, hand-drawn detail, from the lush foliage of Jibberish Jungle to the flurrying snowfalls of Mystical Pique. There's an almost eccentric level of variety on display here. One moment, you swim through a haunting underwater abyss; the next, you leap across an industrial cooking pot full of molten lava in some hellacious version of a Mexican restaurant kitchen. Whether it's your own character or the many different enemies you encounter, the 2D animations are wonderfully fluid and impress a strong kinetic energy onto every last bit of movement.

And move you do; this platformer is built with the idea of player momentum firmly in mind. Most levels are intricately designed pathways built to encourage a quick pace, with rapidly transforming (often crumbling) environments, wide gaps, and enemies that frequently get the best of you if not attacked head-on. Fortunately, the tight, responsive controls in Rayman Origins give you every tool you need to accomplish this left-to-right journey. You start only being able to sprint and jump, but you eventually unlock new abilities, such as gliding through the air and running up walls or ceilings. And no matter how extravagant your move set becomes, the game always responds precisely to your inputs.

That's a good thing, too, because Rayman Origins is a deceptively challenging game. Though it starts out easily enough, the difficulty curve moves on a constant, gradual upswing. Later levels become twisted death traps outfitted with swinging radial saws, spike-covered monsters, and crashing electrical storms. Yet none of it ever feels cheap; you're always in control, and the sensation of darting through these intricately placed hazards makes for an extremely rewarding experience. You never need to worry about having to repeat entire levels over and over again either, thanks to the game's generous use of checkpoints. The difficulty exists--palpable and ominous--but there's nothing artificial about it.

The one area where the difficulty curve falters is in the game's small handful of boss fights. In keeping with the game's uniformly delightful aesthetic, these creatures are always a sight to behold, but they're an inconsistent bunch where your thumbs meet the controller. The challenge posed by these bosses holds little correlation to the sequence through which they're unlocked. It's a random smattering of encounters where one particularly harrowing fight is immediately followed up by a relatively easy one, which creates a weird inconsistency in an otherwise very consistent game.

Fortunately, boss fights don't offer the only change of pace to the game's core 2D platforming. One recurring palate cleanser has you jumping on the back of an adorably angry pink mosquito and shooting your way through a series of hazards that range from easily startled puffer fish to heat-seeking missiles. These levels are a blast and feel like a vintage shoot-'em-up covered in a thick layer of Rayman Origins' absurdist humor. Other notable examples of switching up the standard formula include levels where you have to frantically chase an equally agile target and subdued journeys through an underwater landscape of beautiful but deadly sea creatures.

Throughout all of this, one persistent element of Rayman Origins is the sheer abundance of collectible doodads strewn across every chunk of landscape. Everywhere you go, you find things like lums (the game's version of coins), hidden challenge rooms, and other scattered rewards placed in treacherous locations, which often puts you at odds with your own survival instincts. A few of the benefits are purely cosmetic, like collecting enough items to unlock new character skins. But unfortunately, the level progression system suddenly becomes very demanding once you cross into the second half of the game, forcing you to go back and replay prior levels that you didn't already scour for collectibles with an obsessive-compulsive attention to detail.

However, the forced replaying of previous levels--or any levels, really--becomes an altogether different experience when played in local co-op. Rayman Origins uses a dead-simple system of drop-in/drop-out co-op that allows up to four players to run and jump through every single level of the game. It's a hilariously chaotic form of multiplayer where the risk of being accidentally smacked around by a teammate cancels out the built-in advantage of having a few extra hands along for the ride.

Whether you choose to approach this adventure by your lonesome or with three friends, the fact remains that this is a charming, gorgeous, and thoroughly entertaining 2D platforming experience. Rayman Origins draws a lot from the past, but it does so while managing to feel fresh and full of life. This is one worthwhile journey no matter which era it's from. 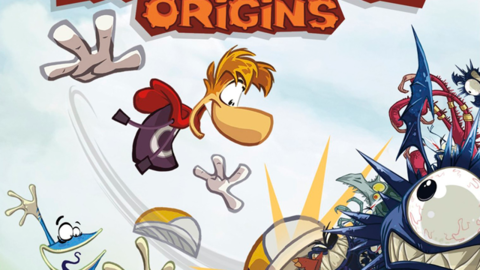 Rayman Origins is a comic adventure set in a lush 2D world brimming with unexpected secrets and outlandish enemies.