It's been three-and-a-half years since Ubi Soft's limbless platforming hero did his part in redefining the 3D platformer. Super Mario 64 might have laid the groundwork, but anyone who's played Rayman 2: The Great Escape can tell you that this little French fellow refined the formula with impeccable production, a unique sense of style, and some of the most varied and inventive gameplay yet seen in a 3D platformer. But now that he's finally back, is Rayman 3: Hoodlum Havoc the life-altering follow-up that players have been waiting for? In a word, no. Rayman 3 doesn't blow the doors off Rayman 2, but it does further refine the formula, is completely worthy of the Rayman name, and is also one of the best platformers we've seen on the GameCube thus far.

Admiral Razorbeard and his robot parade have been completely flushed from the world of Rayman, but many of the supporting characters from Rayman 2 return. The Cheshire cat-inspired insect Murfy helps Rayman through the tutorial areas of the game. The small and magical teensies still play the part of the hostages, and help Rayman along on his quest when they can. Rayman's aquamarine-toned lummox of a friend Globox returns, playing an even larger part than he did in Rayman 2. Through a series of events, Globox ends up with Andy, the leader of the dark lums, in his stomach. The dark lums are sort of like the energy-restoring red lum pixies from Rayman 2, only really mean. The teensies send Rayman and Globox to find a doctor who specializes in stomach problems, but Andy and his army of hoodlums (lums that wear hoods, get it?) are going to try to stop them at every turn. Of course, Globox's tummy ache is just the tip of the iceberg, but the situation sets the tone for the rest of the game nicely.

Rayman has always been a very versatile platforming hero, with the jumping and the punching and the grappling and the gliding, and Rayman 3 expands considerably on the lead character's abilities. Rayman 3 definitely puts a greater focus on combat than previous entries, and Rayman is better equipped for it, too. Holding the R trigger will put Rayman into strafing mode, and when he's in range of an enemy, he'll automatically lock on. Rayman can still throw a straight punch, as well as a charged punch, and if you're locked on to an enemy and pushing to the left or right while throwing your punch, your punch will curve accordingly. These curved punches can come in handy against enemies hiding behind obstacles, as well as in some specific puzzles.

Defeating certain hoodlums and rescuing certain teensies will produce an energy canister that can grant Rayman special skills for a short period of time, though the amount of time you'll have differs for each ability. All told you find five different types of energy canisters through the course of the game. Red canisters give Rayman big metal fists that are capable of taking out enemies with one punch and busting down otherwise unbreakable doors. Blue canisters equip Rayman's fists with what look like iron jaws on the ends of chains, which are handy for grappling. Green canisters produce a sort of whirlwind punch useful for lowering specific kinds of platforms. Yellow canisters give you a helicopter hat with some upward lift. And, finally, orange canisters equip Rayman with a potent but short-range guided missile. The game introduces these power-ups slowly, initially using them just to help make the proceedings a little bit more manageable. But as you get into the thick of things, the power-ups become integral parts of puzzles, and near the end you'll find yourself juggling from one power-up to the next just to keep alive. Fans of Rayman 2 might initially be taken aback by the changes Rayman 3 makes to the gameplay, but ultimately, they help maintain the pace of the game and help bring greater variety to the action.

Variety of action has always been a trademark of the Rayman games, and Rayman 3 delivers on this. In between his regular platforming duties and slugging it out with hoodlums, Rayman will ride on top of beams of energy inside what can only be described as a disco kaleidoscope, drive around in a giant shoe, defend a pirate ship against attackers, attempt to outrun a rising lava line, play both pilot and tailgunner on a tiny spaceship, and engage in several good old-fashioned boss fights. The game is full of some memorable set pieces, like the ethereal crystal castle and the house of mirrors, where platforms are only visible in their reflection. The game does eventually settle into a bit of a pattern--platforming puzzle, hoodlum fight, platforming puzzle and a hoodlum fight at the same time, boss fight, and so on--but the actual action itself is so consistently engaging and unique that by the time you've become acutely aware of the pattern, the game is over.

Rayman 3 is a pretty short game, and most players won't take more than 15 hours to get through it the first time, though there are some pretty cool incentives to keep you going back to levels you've already beaten. Wasting hoodlums, collecting gems, and freeing teensies in the main quest will net you points, a new addition to the Rayman series, and accruing enough points will unlock bonus minigames. Some of them are pretty run-of-the-mill, like the simplistic tennis game, while others, like the surprisingly playable first-person shooter minigame, display the sort of inspiration that has made Rayman games so great.

Of the 12 unlockable minigames, the real gem is the one called Mad Trax, which makes use of the GameCube-Game Boy Advance link cable. It's basically a race course with a beginning and an end but no track in between. Player one controls the shoe-driving Rayman on the TV, while player two uses the GBA to play a Tetris-style puzzle game where each puzzle piece represents a piece of the track that player one is trying to navigate. It's about as crazy to play as it sounds, and it's easily one of the most clever uses of the GameCube-GBA link capabilities we've seen to date. And, if you also happen to have Rayman 3 for the Game Boy Advance, you can use the link cable to download exclusive new levels.

Visually, Rayman 3 maintains the spirit of Rayman 2, but with a much broader, brighter color palette. While Rayman 2 used primarily subdued colors, Rayman 3 isn't afraid to get loud with the colors, to the point of being downright psychedelic. The range of environments you'll play through is great, jumping from a serene forest, to a murky swamp, to the inappropriately named Land of the Living Dead, to a hellish desert, a snowy mountaintop, and much, much more. While a lot of the environments are well worn within the platformer genre, Rayman 3 keeps them interesting with unique level designs and crisp, gorgeous textures. The high-quality textures really make a huge difference, as you'll rarely see a texture that looks like filler--everything is there to help further establish that level's atmosphere. The game also sports much more advanced lighting than seen in Rayman 2, with just about every action producing some kind of unique particle effect. Rayman himself looks more refined as well, though much of his animation has been obviously recycled from Rayman 2, and the lack of any transitional animations can cause some abrupt changes in movement.

If there is any single flaw in Rayman 3's visual presentation that's worth pointing out, it's the camera. The game generally keeps the camera pointed where you need it, and there's even a fair amount of automation to help things out. Also, using the R trigger to go into strafe mode will automatically snap the camera behind you, which can usually alleviate most problems. But when walking down narrow passageways, the camera will feel a bit jerky, and the camera will sometimes get snagged, lingering behind longer than it should. These are common problems for third-person action games, ones that Rayman 2 was also subject to, but because of the polish that the rest of the game exudes, these relatively small problems are that much more noticeable.

Another noticeable problem with Rayman 3 lies in the sound. Well, it's not so much a problem, really, as it is a style choice. Up until Rayman 2 Revolution for the PlayStation 2, everyone in the Rayman universe spoke in his or her own nonsense dialect with subtitles, as in Animal Crossing, Banjo-Kazooie, or The Sims. Rayman 3, however, features an all-star cast of voice actors and discards the Rayman-speak entirely. The voice acting itself is competent, with John Leguizamo doing a surprisingly good job of voicing Globox, but some of the dialogue the characters are given feels like it's trying too hard to be self-aware and hip. There are some other recurring sounds that can become a bit grating over time, like the "you just unlocked a new area" sound, but generally speaking the sound in Rayman 3 is well done. As if to try to bring some street cred to the franchise, Ubi Soft brought in dance act Groove Armada to do the intro music to the game, and it's a catchy tune, but it's not really representative of the rest of the game's music. Plenty of the music hearkens back to Rayman 2, which uses a sort of New Age sound to help evoke a genuine sense of wonder when appropriate. Unafraid to stray from its roots, the music will shift to disco-funk or hard-rockin' action-movie-techno during the appropriate segments.

To sum things up, Rayman 3: Hoodlum Havoc is an excellent 3D platformer and is one of the best to appear on the GameCube. Though the game is rich with extracurricular features, the main quest proves to be a little too short, and the game doesn't provide quite the same level of satisfaction as its predecessor. Ultimately, Rayman 3 probably isn't the mind-blowing follow-up that fans of Rayman 2 were hoping for. What Rayman 3 does is re-create much of the same lighthearted whimsy that made Rayman 2 so incredibly enjoyable, while differentiating the action enough for the game to stand up on its own. 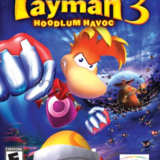