The manic rabbids are at it again, providing a solid helping of simplistic, good-natured fun.

When it comes to enduring icons of the video game industry, squat googly-eyed creatures with a penchant for screaming don't really seem like they would have the sticking power to make a lasting impression. Yet, four years after the name "Rabbids" first appeared on a box cover, these manic weirdos have established themselves as one of the most consistently funny crews in the business. The rabbids latest outing, Raving Rabbids: Travel in Time, is full of their signature goofiness, including such amusements as silly alternate-history scenarios and a dedicated scream button. The action itself is uneven, so while some game types are satisfying and fun, others are lackluster and awkward. Things get better when other players jump into the fray, and though the shallowness eventually catches up with you, that wacky rabbid charm goes a long way toward extending the game's appeal.

Travel in Time finds your rabbid transported via magical washing machine to the halls of a museum. From there, you waddle around a spacious central area to access the various types of games available for play. Some can be played without leaving the hall, and these offer simple, if short-lived, enjoyment. A trivia game tests your knowledge of history, raving, and the game itself. These multiple-choice questions range from mildly interesting ("What was Mona Lisa's real name?") to utterly silly ("What would never fly?"), providing some humorous highlights and a comparatively calm break from the other games. A dancing game challenges you to get up and get down in your living room as you mimic the moves of Just Dance 2-style silhouettes. The period costumes and exuberant maneuvers make dancing a suitably screwy activity, but there are only seven songs to which you can dance. Finally, there's a singing minigame with a notation scheme that is similar to that of Guitar Hero: Warriors of Rock or Rock Band 3. Notes scroll down in five columns, and you tilt the remote to select the correct column and then press the scream button to "sing." Getting four rabbids to sing in harmony is definitely an amusing sight, but the controls are too imprecise and uncomfortable to make it fun for more than one song.

These three minigames are more like palate cleansers than main courses, and they serve their purpose reasonably well. The bulk of the gameplay lies in five different activities that require you to travel to five other areas within the museum. Each activity has multiple levels, and each level starts off with an animated cutscene that depicts the rabbids arriving at notable moments in history and messing things up royally. Each level has two possible outcomes that are coded orange or purple. An orange choice (or a victory by the orange team) sets history back on track, while a purple one establishes an alternate course of events. Either way you go, you are treated to another cutscene that features rabbids doing what they do best, and these outcomes are usually good for a chuckle. Some, like the fate of the Titanic, are more dramatic than others, like a rabbid-infested Roman coliseum. And alternate histories are almost always more tempting than setting things straight. The silly cutscenes offer enough incentive to make playing each level of each activity worth it, though in doing so, you will find that not all activities are created equal.

The most enjoyable endeavor is flying, thanks to the intuitive controls. The remote and nunchuk each control a wing, and you turn by lifting one and lowering the other while holding down the A button to engage your motor. Flying levels include four-player races, complete with boost rings and power-ups, as well as arena battles in which two teams must retrieve and deposit blocks to earn the most points within a given period of time. The simple controls are responsive and engaging, making these levels a lot of fun. On the other end of the spectrum, the activity that requires the Wii MotionPlus is plagued by awkward controls. In these levels, you pick up your rabbid and throw it into the environment like you are casting a fishing line. Though you can lock the aim direction, it's tempting to release the lock-on button when casting, which can mess up your throw. It can also be tricky to judge distance, especially in a level where you slowly climb the side of a skyscraper, which makes this the weakest activity in the bunch.

The other three activities are more straightforward, occupying a sometimes-fun-sometimes-dull middle ground. The point-and-shoot activity is the most basic, requiring a sharp eye and a quick trigger finger. Though a survival-based coliseum challenge can be frantically amusing, these activities have a been-there-done-that feel that doesn't bode well for replayability. The jumping activity sees your rabbid leaping through two-dimensional levels trying to collect items or just stay alive. One clever level takes you on a block-busting trip through the center of the earth, though the bouncy controls make it tough to maneuver with complete precision. The final activity tethers you to another rabbid as you both scurry through levels, trying to outrun or outcollect the other team. Coordinating your movements with another player makes you both faster, and though a computer-controlled ally usually does a good job of following in your footsteps, this game is much better enjoyed with others.

Almost every activity provides some measure of amusement, which is usually increased when you are competing against or cooperating with other players. Every activity supports up to four people, and playing with a few friends in your living room leads to a good amount of goofy, ridiculous fun (especially when each player discovers the button that makes your rabbid scream, "BWAAAHH!"). You can also connect with up to three other players online, though only two Wii consoles can connect at one time. Entering Meet-Up Mode queues you up to join available players, and once connected, you and your party travel around tethered together, jumping into activities and levels according to majority opinion. Finding partners isn't a problem, and it's easy to disengage from a game if you don't like the crowd you end up with. The friend management system allows you to easily connect with recent players, and you can also participate in online challenges between the three rabbid factions by playing levels and contributing your score.

Raving Rabbids: Travel in Time has a couple of extra features that sweeten the deal a bit; notably, the ability to dress your rabbid in a wide variety of unlockable historical costumes. Though the breakdown of which costumes cause the rabbids to change skin tone (Mahatma Gandhi, a boxer) and which ones don't (an Aztec, a Native American) is questionable at best, it's still a lot of fun to wander around with an apple on your head (Sir Issac Newton) or in a decaying mummy wrap. The game also doles out awards for your accomplishments, but these are only displayed on an out-of-the-way list, and there is no satisfying way to view them all at once. Still, there is satisfaction to be found here, especially with friends in the mix. The rabbids' barmy sense of humor sets a great tone for the action, and even though some activities are better than others, Raving Rabbids: Travel in Time provides a solid amount of silly, simple fun. 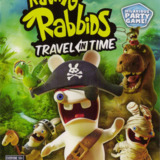 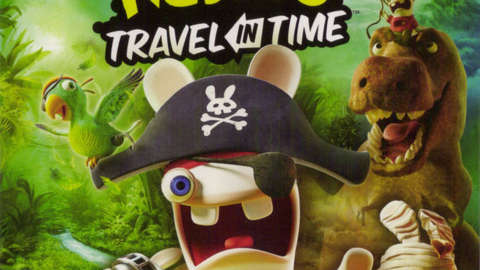 Romp through ancient history in this time-traveling platformer featuring those wacky Rabbids.

6.2
Sign In to rate Rabbids Travel in Time 3D