Ratchet & Clank: Up Your Arsenal Review

Ratchet & Clank: Up Your Arsenal is great fun, combining some solid platforming action with a lot of exciting combat.

Putting out a follow-up every year is the sort of crunch-time madness that's usually reserved for sports offerings. But for the third year running, Insomniac Games has put together an entry in its excellent Ratchet & Clank series. This installment, subtitled Up Your Arsenal, doesn't reinvent the usual single-player mechanics. Instead, this year's iteration makes incremental changes to things like weapons, locales, and so on, while wrapping the game in a new story. It also adds a great, objective-based multiplayer mode that can be played by up to eight players online. All things considered, Ratchet & Clank: Up Your Arsenal is great fun, combining some solid platforming action with a lot of exciting combat.

For those of you who haven't been following the series, Ratchet & Clank is a very combat-focused platformer that gives you a lot of wild weapons to play with. You play as Ratchet, some sort of big-eared alien thing, and Clank, his robot companion. For the most part, Clank sticks to Ratchet's back. However, from time to time, the duo will separate. When this happens, you'll take control of Clank by himself. The action is fairly standard for a platformer in that you'll be doing a lot of jumping around and hitting things with your standard wrench attack. The weapons in the game do change this up a lot, though.

The focus on combat means that you'll spend a lot of time blasting enemies with a wide variety of instruments of destruction. Some from the previous games return here, and you can even use some of them for free if you have save files from the other games on your memory card. Most of the weapons fall into pretty standard categories. You have a grenade launcher, a standard rapid-fire-shot, and a shotgun. You'll also be able to create tiny black holes, emit deadly bolts of electricity, turn enemies into sheep, snipe enemies from a distance, and so on. Some weapons fall into support roles, like those that have the ability to create turrets, summon batches of robots to attack foes, or even create small shields to hide behind. Weapons also gain experience and features as you use them. The five different levels of any one may just make it more powerful, but some gain the ability to induce shock damage, offer lock-on capabilities, and more. This variety gives you a lot of different ways to take on the opposition, but you'll find that the standard weapons, like the shotgun and machine gun equivalents, are definitely the most useful.

The single-player thrusts you right into the action, assuming that you already know everything about Ratchet and Clank's exploits up to this point. Clank, it seems, has gone on to become a television star. But the world falls into peril once again, this time from an evil robot named Dr. Nefarious, so the duo springs into action to stop the mad doctor before his plan to turn all organic life-forms into robots comes to fruition. Along the way, you'll join up with the ever-popular Captain Qwark, his creepy-looking one-eyed monkey, and a cast of characters--new and old--that assembles the Q-Force, Qwark's new squad devoted to fighting Nefarious.

Nefarious has quite an army of enemies for you to gun through. Much of Up Your Arsenal's combat requires you to be fairly patient and rely on cover when possible. Your enemies will do the same, so you'll frequently have to either wait for them to pop out from behind a wall or just run up on them, guns blazing, and hope for the best. While you can get away with full-frontal assaults for most of the game, the later levels really punish sloppy play, forcing you to take things at a more methodical pace or watch as you're repeatedly crushed by robots, ninja robots, gladiator robots, robots with maces for arms, hovering robots with spinning blades, giant robots, tiny robots, or the occasional slimy-looking alien beast. The enemies may look different from level to level, but aside from increased resilience to your shots, the tactics remain mostly the same.

The general structure of Ratchet & Clank hasn't really changed too much over the years. Up Your Arsenal keeps most of the elements found in the last game, with some slight changes here and there. Your overall goal is to stop Nefarious, of course, and you'll accomplish this by taking on a host of missions all over the galaxy. Most of these missions simply require you to get to a specific point in a level, at which time you'll see a cutscene that advances the story and gives you someplace else to go. Early on, you'll encounter a spacecraft called the Phoenix, which acts as your home base. However, your trips back to it usually just involve seeing another cutscene that gives you the location of your next objective. The cutscenes are put together very well, and they showcase the game's great-looking character models. A handful of them are pretty funny, too. One sequence is the latest music video from a female robot called Courtney Gears, and everything, from the synchronized dance moves to the song's epic pop production and incredible devotion to extreme overuse of an autotuner, is a spot-on parody of recent pop music.

All in all, Ratchet & Clank's single-player mode will keep you busy for well over 10 hours, especially if you devote yourself to completing all the optional challenges. The game tosses a handful of combat scenarios at you throughout the course of the storyline. These operations are broken up into multiple parts, and in them, you'll be fighting alongside a set of boneheaded robots as they fight to drive out the enemy horde. Objectives vary from mission to mission, so you'll be guarding bridges, using a turret to shoot down dropships, flying in a hovership to gain air superiority, and so on. You'll also be given the opportunity to compete in a Running Man-like game show called Annihilation Nation. While you'll have to visit the show for story-related reasons, you can also go back to compete in a series of challenges. Some of them just task you with surviving multiple waves of enemies, but others put different spins on the action by restricting you to one weapon, giving you a time limit, and so on. These missions may be optional, but they're pretty fun, and, more importantly, they give you a lot of bolts, which represent the currency used to purchase things like new armor and weapons.

Ratchet & Clank has always controlled well, but with an even more intense focus on combat, some additional options were necessary. Now, you can swap to a first-person mode or a strafe-locked, third-person mode that controls more like a shooter than a platformer. This is really handy for some of the game's arena sequences and for some of its other parts, where you're going to be shooting lots of things for a long time. But where these options really come in handy is in the multiplayer mode.

While the single-player feels, at times, like a mission pack for Ratchet & Clank 2 instead of an entirely new adventure, the "all-new" development efforts clearly went into Up Your Arsenal's multiplayer component. It allows you to play games in three different modes. Deathmatch and capture the flag are pretty standard takes on pretty standard modes. Siege mode is the most involved of the three. It's essentially a smaller-scale take on Unreal Tournament 2004's onslaught mode. The team-based game gives each side a base and populates the rest of the map with a series of neutral nodes. Capturing a node, which is done by using your wrench to turn a gigantic bolt at the center of each one, puts that outpost's turret on your side, and it also delivers occasional items and vehicles. You can also spawn from any node that your team controls, should you die. The object is to destroy the opposing team's base defenses, make your way inside its base, and destroy its power source. Doing so ends play. While siege mode won't feel too new to players who have played the similar mode in UT2004, this is the first time such a mode has found its way on to the PlayStation 2. You can play the multiplayer on a four-way split-screen--if you have a multitap--but this pales in comparison to the eight-way matches that are possible online. The online mode has a good number of options overall, and the game does a great job with stat-tracking. The multiplayer gameplay itself isn't the deepest mode in the world, since a great deal of the on-foot combat strategy boils down to doing sideways strafe jumps to avoid getting hit, but it's definitely fun and brings some additional variety to the game.

Graphically, Ratchet & Clank continues to be a series that brings out the best in the PlayStation 2 hardware. While some of the more extreme explosions cause some slowdown, Up Your Arsenal usually stays right up around the 60-frames-per-second mark, delivering some nice, smooth action. The character models all look great, and in the cutscenes, they animate and express very, very well. The bright, colorful look permeates each of its environments, and, generally speaking, the game looks absolutely superb, from top to bottom. It also has support for widescreen displays and progressive scan setups, which enhances the look of the game, but not dramatically.

Up Your Arsenal does a superb job with its sound effects, too. Many of these effects return from the previous offerings, but the weapon sound effects have a great amount of punch to them, making them sound even more powerful than some of them really are. The cutscenes are heavy on the voice work, and the actors and actresses that deliver lines all do some excellent work here, which really helps to make the story more entertaining.

Fitting a team-based shooter into a platformer might not seem like a great fit at first, but when taken as a total package, Ratchet & Clank: Up Your Arsenal is a truly great game. The single-player action is true to the previous entries in the series, almost to a fault, while the multiplayer mode is a fun diversion that adds a lot of replay value to an otherwise one-time adventure. If you're a fan of the series, there's plenty more to see here, but even if you're just getting started with the Ratchet & Clank games, Up Your Arsenal's full feature list makes it a great place to start. 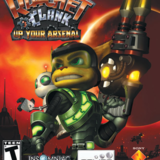 Ratchet & Clank: Up Your Arsenal
Follow
$16.99 on Walmart
Buy 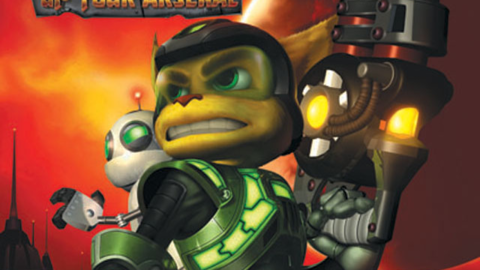 Ratchet & Clank: Up Your Arsenal

Ratchet & Clank: Up Your Arsenal is great fun, combining some solid platforming action with a lot of exciting combat.

9.2
Sign In to rate Ratchet & Clank: Up Your Arsenal