The Lombax, the Robot, and the arsenal.

Ratchet & Clank is proof there’s still a lot of mileage left in the 3D platformer genre. It’s less of a reboot and more of a return to form, revitalizing and updating the franchise while simultaneously keeping its use of inventive weapons, alien worlds, and quirky attitude intact. Resurrecting an older franchise can be a gamble, but here the payoff is plentiful.

Ratchet & Clank is a technically rejuvenated version of the PS2 classic. It returns to the same alien universe, taking both Ratchet and his robot friend Clank to multiple planets during their adventure. True to the series' history, there’s a large arsenal of weapons to play with, many of which have multiple applications in combat. The Pixelizer is a powerful blaster converting enemies into their 8-bit forms, causing them to burst into a mess of colored squares when defeated. The bomb glove returns as a helpful grenade-tossing weapon capable of devastating large groups of enemies. The Groovitron kicks out a funky beat and distracts enemies from attacking by launching them into a dance frenzy. Each weapon is distinct, and all of them have robust upgrade trees to make them all the more effective against the many different enemy types.

There’s a generous offering of gadgets as well, including a modification that turns Clank into a jetpack and the Tresspasser device that grants Ratchet access to new areas through a hacking minigame. Items are arguably more important than the weapons, since a majority of each level is built to utilize different combinations of the items Ratchet has collected. In an effort to streamline the process, necessary items are automatically equipped to Ratchet via interaction points in each level, allowing you to focus on building up your weapon upgrades and tinkering with the guns that best suit your play style.

As a bonus, there are benefits to backtracking to older levels and using newfound items to gain access to previously unavailable areas. Although it maintains the same tight and restricted environments of its predecessors, there’s a great deal of verticality, hidden elements, and side objectives in each level to lend players more content to dig through.

A level’s objective flow sticks to its traditional format of visiting planets, defeating enemies, and moving on to save another planet in peril while continuing the story. While the objective rarely changes, however, the way things are accomplished do. One level may be a dogfight in the sky in which Ratchet has to take down enemy warships; another may be a smaller, more puzzle-focused challenge for Clank to resolve. They’re not as prevalent as the standard third-person shooter/platformer levels, but they do serve as a nice challenge in between.

Ratchet & Clank is delightfully self-aware. The story begins with an imprisoned Captain Qwark, the egomaniac leader of the Galactic Rangers with whom Ratchet has a somewhat colorful history. Throughout, Qwark narrates the story while telling a fellow inmate about how he first met Ratchet. Qwark is endearing for a narcissistic buffoon, and his narration is central to Ratchet & Clank’s charm. He’s sometimes unreliable, embellishing parts of the story to make it seem more grandiose and heroic. Other times, he comments on the player’s in-game actions with Ratchet, making small remarks about Ratchet’s lack of gadgets or movement, which is as entertaining as it is helpful.

He’s not the only standout performer, either. Virtually every character in the game has a generous amount of quirk poured into their personalities. After helping him repair his ship, one technician tells Ratchet he’ll see him in the next reboot. Another character is an aloof professional athlete with a demeanor not unlike competitors in the early years of the X-Games. And one of the main villains, Chairman Drek, is the wonderfully greedy and smarmy uber-executive he’s always been.

The strength of each character is important, because the story itself is probably Ratchet & Clank’s weakest point. It’s a basic story about two hapless misfits who set out to achieve a dream and save the galaxy from catastrophe at the hands of greedy and mad antagonists. Other than a rushed and awkward ending, there’s nothing unforgivable about it. It just serves more as a vehicle for the characters who outshine everything else in the narrative.

Ratchet & Clank’s finest attribute is its visuals. Nearly everything about it is absolutely stunning, from the environmental design to the character animations. Each planet visited in-game looks different from any other, with brilliant color and texture popping on the screen. Characters’ distinct designs are borrowed from aspects of their personalities, from the goofy soul patch and sunglasses of Skid McMarx to the sickly pallor of the evil Chairman Drek.

The animations are beautiful, lending characters an elasticity in their movement, making them appear both cartoony and fluid. This, along with detailed particle effects and vibrant environments, make the game visually spectacular.

Ratchet & Clank is every bit as dynamic and fun as the 2002 original. It’s endearing and entertaining, a veritable power fantasy fueled by rockets and carried by specialty gadgets. Re-introducing a classic franchise to a new generation is a difficult task indeed, but Ratchet & Clank is a shining example of how it can be done. 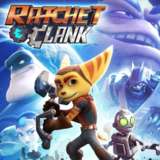 Cassidee is a longtime Ratchet & Clank fan and completed a full play through in about eight hours. This review was conducted using a copy provided by the publisher.