Quest for Booty ratchets up the fun, but its strict adherence to the series' formula won't bring in new fans.

Even though the Ratchet and Clank series has stuck with the same formula for all six console games, each new release has brought a tweak that has made the experience feel unique. From upgradable weapons to motion controls, the series has seen a sprinkling of new ideas without messing with the basic play mechanics that work so well. Quest for Booty doesn't bring anything particularly noteworthy to the table, but it does take advantage of its bite-sized serving portion in one key way: It focuses purely on fun. Whereas previous games have lost their way with too many minigames and side quests that detract from the core running-and-shooting action, Quest for Booty banishes the superfluous ventures and showcases a nonstop tour of Ratchet's most exciting moments. Its strict reliance on baddie-shooting, bolt-collecting gameplay won't convert anyone tired of those activities, but people looking for a perfectly paced platformer with tight controls and impressive visuals will fall in love all over again.

Clank serves as the titular booty in Ratchet's latest quest. The story picks up right where last year's Tools of Destruction left off: Clank has been taken away by the Zonis and Ratchet is left frantically searching for his robotic friend. The tale is narrated by Rusty Pete and Captain Slag's decapitated head, and their back-and-forth bickering provides the humor that has become a series staple. Elaborate cutscenes are mostly missing in this downloadable version; instead, the story is told through static 2D pictures or a simple map that shows your progress while Rusty Pete proves that not all robots are intelligent. Unfortunately, the conclusion will leave you hanging in the same way that last year's Tools of Destruction elicited a few exasperated sighs.

Quest for Booty can be completed in less than four hours, but it uses its limited time to its advantage. There is not a single dull moment during the adventure. The extraneous minigames that have plagued previous entries, such as ball-rolling puzzles and spaceship fighting, have been completely removed. Instead, you'll alternate between thrilling shooter action, tricky platforming, and clever puzzle-solving, with only a minute to catch your breath before a new obstacle is placed in your path. As new diversions were thrown into each R&C sequel, the core play mechanics became less and less important. This downloadable incarnation, which feels more like a Ratchet episode than a full-blown sequel, has shifted the focus to what makes these games fun to play, and is better for it.

Unfortunately, by stripping away the extraneous activities, developer Insomniac has also removed some beloved series staples in the process. The most significant absence is the arena missions. These served as wanton rooms of destruction, places to test your mettle against wave after wave of killer enemies. They provided variety to the standard shooting action, enforcing rules that limited how you could attack your foes. Trying to survive 100 rounds with limited ammunition or wiping out a platoon of angry robots with just your wrench proved more satisfying than any other obstacle in the series.

Collecting cool items was one of the previous games’ main draws, but that extra content has been streamlined to a fault. You can only upgrade your weapons twice, and without skill points to earn and gold bolts to search for, there's really no reason to play this twice. Also missing entirely from the quest is Captain Quark, the befuddled superhero whose exaggerated exploits were always good for a laugh. His 2D levels in Up Your Arsenal are among the best moments in the entire series; not having his own goofy quests or boastful soliloquies takes away a lot of the series' personality. With Clank also missing since he was captured by those alien robots, it makes the world feel much lonelier than in previous games in the series.

At least the void left by the missing characters can be filled with vibrant graphics. The visuals in Quest for Booty are among the very best on the PlayStation 3. It builds on the already excellent world from Tools of Destruction and adds even more detailed textures with no frame-rate hiccups. Most impressive are the lighting effects. Some of the levels in Quest for Booty take place in dark, underground caves where you have to grab bioluminescent creatures with your wrench to light your path. This produces an incredible effect in which the extreme contrast between the bleak dankness of the surrounding area against your glowing, living torch provides moments of visual awe. The music is also top-notch and sets the tone of each new environment beautifully. The various pirate ditties are also quite humorous. With the same high-level voice acting that you've come to expect from Ratchet games, this is one of the most impressive technical showcases around.

Quest for Booty is the finest console Ratchet and Clank adventure since Up Your Arsenal, even when you factor in the missing ingredients. The excellent pacing makes this the most focused game in the series, and the visuals and control live up to the high bar established in previous Ratchet games. It won't sway those who have given up on the franchise, but anyone looking for a platformer that focuses on nonstop entertainment will find a lot to love here.

View Comments (10)
Back To Top
7.5
Good
About GameSpot Reviews 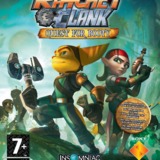 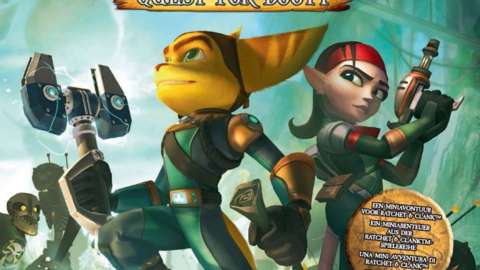 Ratchet and Clank return and pick up where Tools of Destruction left off.

8
Sign In to rate Ratchet & Clank Future: Quest for Booty

Everyone 10+
Fantasy Violence, Use of Alcohol