Clank has dutifully served as Ratchet's robotic sidekick for years, accompanying the gun-crazy lombax across the universe but mostly staying in the background while Ratchet had the fun. In Ratchet & Clank Future: A Crack in Time, Clank steps out from the shadow of his furry friend, finding his own obstacles to overcome that not only provide an awesome change of pace from the Rachet's explosive action sequences, but are also the highlights of this great adventure. The time-manipulation puzzles are as thought-provoking as anything that has appeared in the series and go a long way toward making the seventh iteration in this long-running series feel fresh. That's not to say the standard gun-shooting action has grown stale, though. The beautiful worlds Ratchet visits are huge and diverse, seamlessly blending shooting with platforming to provide some of the most exhilarating and downright fun moments that have ever appeared in this series. Even though it treads familiar ground, A Crack in Time is the best in the franchise so far on the PlayStation 3, and a raucously fun and engaging adventure to boot.

A Crack in Time is the conclusion of the story that began with 2007's Tools of Destruction. The game begins with the always entertaining Captain Quark narrating a brief summary of the events from the last two games, so series newcomers don't have to worry about being confused by all the talk of zonis, fungoids, and other alien species with silly names. In short, Clank is still hanging around with highly advanced robots, learning why he was created in the first place; and Ratchet is scouring the universe in search of his metallic buddy. Despite some dramatic moments late in the game, A Crack in Time rarely takes itself seriously. The villains, sidekicks, and various creatures you meet along the way have quirky personalities that provide more than a few laughs. Quark is the center of attention whenever he's onscreen--whether he's lamenting technology for once again foiling him or cursing the inhumanity of being served tap water while in prison--and the consistent string of jokes maintains a goofy, lighthearted vibe throughout your quest.

Although you spend most of the game playing as Ratchet, the Clank portions are the most inventive of the game. As you run through a giant clock at the center of the universe, you have to solve a series of time-based puzzles that will tax your brain but never feel cheap. Each puzzle places you in a room with buttons, time pads, and a locked door at the end. By standing on a time pad, you can record your actions for up to a minute, and you must make clones of yourself to stand on every button to be allowed to pass through the door. The most interesting aspect of these puzzles is how you have to work in perfect harmony with clones of your past self. For instance, you must record yourself standing on a button to lower a platform to ground level and then get off the button to make the platform rise again. Once that recording exists, you can start a new recording in which you run toward that platform, stand on it when it gets lowered, and then leap off when it rises to the top. The puzzles build on this idea of using your past self to help you move forward, and it's a kick trying to time your actions perfectly to make sure you can safely make it to the next room.

If it's difficult to wrap your head around those puzzles, you'll find solace in the much more straightforward and immediate Ratchet sections. You once again travel across the universe, landing on a wide assortment of alien worlds that all have their own unique style, as well as inhabitants to mingle with and different enemies to destroy. You spend your time moving from over-the-top shooting sequences to careful platforming portions, with the odd puzzle thrown in for good measure, and the game does a great job of mixing up your objectives without distracting you from the exciting action. The shooting is as awesome as ever because the controls work so well. Even though the game frequently floods the screen with a small army of angry attackers, you'll never feel overwhelmed because of how smooth the combat feels. It's a joy to be able to deftly dance away from a bomb being thrown at your head and then retaliate in kind.

There is a good array of weaponry in Crack in Time, ranging from such shooter standards as a shotgun and sniper rifle to ridiculous weapons that have become a staple of the Ratchet series. You can turn your enemies into monkeys, freeze enemies with ice grenades, or scatter electric spikes all over the battlefield. Although some of the weapons have been recycled from previous games, they are all fun to shoot, and the newest additions are just as quirky and entertaining as the many guns from older games. Killing enemies is always fun, but the combat in A Crack in Time is rewarding because of how quickly you can upgrade your guns. Every shot you land earns you a little bit of experience, and after killing a few dozens enemies, your gun levels up, which makes it more powerful and useful in battle. There are also collectibles all over the galaxy that let you build new guns, upgrade your old guns, or even unlock a new boss fight. A Crack in Time doles out rewards at a steady rate, making you always feel like you're accomplishing something whether you're mowing down foes or exploring exotic wastelands.

Ratchet also has a fancy spaceship that lets you travel across the universe in style. Space missions have appeared in older games in the series, but dogfighting in A Crack in Time is more exciting and gives you more freedom than previous space ventures. Your movement is restricted to a 2D plane, but you can quickly pull off barrel roles and loop-de-loops, making it easy to evade enemy blasts. You unlock more moves and weapons as you get deeper in the game, and it is certainly fun pelting your foes with heat-seeking missiles or melting them with scalding blasts from a laser burst. However, the crazy weapons and acrobatic moves are never fully utilized because your enemies are so easy to destroy. The enemy squadrons fly in a predictable pattern, firing slow-moving shots that barely damage your powerful shields. It's still pretty fun flipping through space and gunning down space pirates, but more intelligent and diverse enemies could have made these portions really special.

Being able to choose where you want to land is the coolest aspect of space travel. There are inhabited moons all over the galaxy, and you can take a breather on these exotic spots to gun down the locals or navigate a treacherous obstacle course. There are always a few precious collectables tucked away on these spherical worlds, which gives you a tangible reward on top of the pure fun you get from running and shooting. Once you land on these moons, there is one really neat effect where you can look into the sky and see the universe drift lazily overhead. You can see asteroids and enemy ships flying above you, planets floating far off in the distance, and galaxies swirling many light years away. Unfortunately, the camera doesn't always cooperate. Jumping long distances can be disorienting because the view changes so rapidly, which makes the platforming portions slightly more difficult than in other sections. There is also a strange jumping quirk that crops up no matter where you are in the universe. You'll sometimes slam into an invisible wall when trying to leap off a platform, even though there isn't anything blocking your path. It's a small problem that crops up infrequently, but it can be annoying if it results in an unexpected death.

A Crack in Time looks incredible. Every planet and moon you touch down on has its own look, whether it's a molten mess or a serene forest, which makes it a treat to explore every inch of these fantastic locations. The view from outer space is particularly impressive. The many galaxies you travel to have different lighting effects and cosmic bodies that look simply stunning, painting an amazing backdrop to your intergalactic adventure. The Clank levels are the finest looking portions of the game. The training stages take place in a desolate void, with floating televisions showing Clank's memories and shifting platforms molding to your every step. As impressive as the artistic design in A Crack in Time is, the technology is just as important to the overall experience. Landscapes stretch as far as the eye can see, enemies flood the screen, and explosions frequently go off all around you, but the visuals stay smooth, giving you an unhindered view of the gorgeous scenery.

Even though you can complete the main adventure in less than 10 hours, there are so many side missions and collectibles in A Crack in Time that it can take more than 20 hours to experience everything this great game has to offer. The arena missions are particularly cool; handicaps limit what weapons you can use, which forces you to learn a few new tricks. It's not too difficult to take down a giant monster called Snowball with your full arsenal, but it's a lot more challenging when you're limited to just your wrench. A Crack in Time doesn't drastically change the formula of the series, but that's not a big problem. The core gameplay is still rock solid, and the few tweaks and additions help to differentiate this from previous iterations. The overall pacing has also been greatly improved, focusing on the best moments to keep this adventure fun and rewarding the whole way through. This is the best Ratchet game in years and a great platformer no matter how you look at it.

View Comments (7)
Back To Top
8.5
Great
About GameSpot Reviews 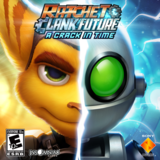