Complex levels and a lengthy quest almost make up for the game's derivative design.

Ratatouille for the PSP is a 3D adventure game that picks up where the popular Disney/Pixar film left off. It presents an original story in which players have to help Remy the rat to run, jump, climb, and swim his way through 30 levels to once again save chef Linguini's hide. The game doesn't break any new ground compared to all of the other platformers and adventure games that are out there, and it might wear thin on you before you're halfway through the story. Nevertheless, the quest is a decent length and the levels do offer a balanced mix of puzzle-solving and enemy bashing.

Gameplay involves the usual stuff that most adventure games have in common, albeit with Ratatouille-inspired nuances. Reaching the recipe card stashed in each level entails climbing up dangling cords, scurrying across furniture, jumping between furniture and shelves, and moving cups and boxes around to use as footstools. When you're swimming across the water contained in sinks and bathtubs, you can have Remy submerge in order to dodge the electric eels on the surface. Remy also seems to have borrowed some of Daxter's and Sly Cooper's acrobatics, as you can make him vault off of horizontal bars and stick landings on the tiniest of knobs simply by pressing the circle button. Enemies in the level will try to chomp down on Remy, but you can send them away with a punch combo or a butt-stomp. If you run out of health, you'll have to start the level over. That's not a frequent problem, however, since food items are everywhere.

Generally speaking, the 3D environments make good use of the PSP's horsepower. They're not quite as lavish as the locations in the film were, but they have that same oil-painting look and they're loaded with chairs, beds, shelves, and other furniture for Remy to climb on. Dynamic details, such as swaying light fixtures and fountainlike running water, also liven things up. If there's one complaint about the environments, it's that some objects that you think should move when you brush past them never budge. Remy jumps through the leaves of plants as if they were ephemeral apparitions, and some electrical cords will stop you cold. For his part, Remy is a lively rat and his many acrobatic animations do justice to the way he was portrayed in the movie. You'll crack a smile watching him scurry across tightropes and somersault off of horizontal bars like a rodent gymnast. Punching enemies is also very satisfying. The enemies themselves are an uninspired lot of spiders, bats, and snakes that don't do much more than snap their jaws, although that's not a big deal since they're just one type of obstacle in levels that are primarily giant obstacle courses.

Watching the film isn't a prerequisite for following the game's story, though you will have a better understanding of who the characters are if you see the movie first. The video clips that introduce missions reveal who the good guys and bad guys are. However, minor characters, such as Remy's rat friends, don't get much screen time and mainly appear as helpers within levels. While the quality of the animation in these video scenes doesn't hold a candle to the movie, they look a lot better than most of the current Saturday-morning fare airing on television. The voice acting in these scenes is also top-notch. Listening to Remy constantly argue with Gusteau's ghost never gets old. You won't hear a ton of comments when you're actually working through a level, but Remy will occasionally chime in with a quip from time to time. During the course of actual gameplay, the soundtrack mainly consists of slapsticky sound effects and Parisian-style music that totally fits with the story's setting. Overall, the presentation is charming, despite its few flaws.

Some missions are more involved than others, but they last about 10 minutes on average. It'll take you roughly six hours to reach the end of the story. You can tack on another couple of hours if you intend to replay levels and collect all of the magic keys, which ultimately unlock actual gourmet cooking recipes that you can prepare in your own kitchen at home. That's a decent length for a movie-based game, and acquiring the know-how to make a bacon-rich quiche lorraine certainly is a neat bonus. Unfortunately, you may find yourself bored before you're halfway through the quest.

The disc also includes a pair of competitive multiplayer games. One lets you race a friend to the finish line. The other lets you compete to see who can grab the most cheese before time runs out. Both games are fun diversions and include a healthy collection of stages. You probably won't bother much with them, though, since they're limited to two players and require both players to be in the same room and have their own copies of the game.

Like the majority of games based on movies, Ratatouille for the PSP is a derivative 3D adventure that borrows ideas from a number of other familiar 3D adventure games. However, it also serves up some intricately designed levels and lets you go wild with Remy's acrobatics in the movie's settings for a solid six to eight hours. Video game fanatics will likely burn out on this game quickly, but there's a good chance that fans of the movie will get their money's worth. 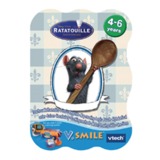 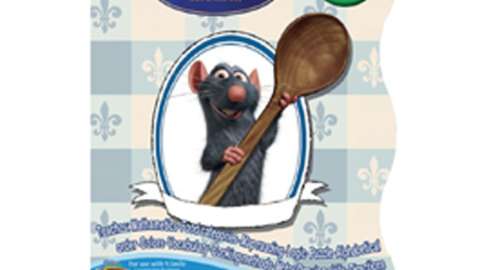 Ratatouille, based on the 2007 feature film of the same name, tells the tale of a young rat who dreams of becoming a famous Parisian chef.