This block-busting platformer has plenty of quirky charm, but the action is too simple to be interesting for long.

Usually, when a game is placed in the "puzzle platforming" genre, it implies that your brain, fingers, or preferably both, will get a serious workout. If you come to Raskulls with such expectations, you'll unfortunately wind up quite disappointed. This colorful block-busting adventure has you racing in cartoony worlds--magical wand in tow--carving your way through obstacles until you reach the end. It's a novel mechanic and does lead to a number of entertaining scenarios, but the overall experience lacks a frenetic hook to keep you engaged. The action is so straightforward that it's quite easy to nail every jump and smash every block without many problems, and you aren't often asked to carefully plan your next step. Because of this simple flow, it's difficult to become invested in your actions, which makes the adventure easy to turn away from after a few levels of going through the motions. Though Raskulls is still a fun game that serves as a worthwhile distraction for a little while, there isn't enough depth to sustain that initial appeal.

Your goal in Raskulls is to collect three shiny stones. Yes, the objects of your desire are as generic as their name implies, and the characters are fully aware of their needless excursions. The cutscenes between levels are a strong enticement to play through this adventure because the characters display a tongue-in-cheek attitude and are so willing to lambaste typical video game tropes. This is a humorous story that revels in pointing out obvious conventions, and it's a lot of fun seeing how far Raskulls is willing to go with this idea. The comedic timing is done exceptionally well, too. At one point, an odd-shaped dinosaur carries on a rambling diatribe about an objective he wants you to complete while your character stares unblinkingly as this verbose monologue is delivered. When the dinosaur finally stops talking, your character waits a beat before saying, "I hate you." It's a great and unexpected moment in a game overflowing with quirky touches.

If only that whimsical charm could carry over to the main game. The concept is strong enough: You wield a wand that can bust through blocks, and you have to get through side-scrolling levels by destroying the objects laid out in front of you. Like traditional puzzle games, when you destroy one block, the object resting on top of it tumbles to the ground, and you may find yourself squished underneath if you aren't careful. No matter how many times you succumb to block avalanches, though, you won't die. A dead Raskull certainly doesn't fit in with this satirical journey; instead, you have to deal with time constraints. Efficiency is key in Raskulls, but the importance of time does not mean you have to be a virtuoso puzzle master to get through these levels within the time limit. It's usually a matter of holding right, slamming on the destroy button, and bullying your way through anything that stands in your way. There are moments in which you have to use turbo boosters or gracefully leap to higher ground, and sharp controls ensure you won't stumble, but all of these actions should be second nature for anyone who has played platformers in the past.

The easy, carefree adventure only becomes difficult when you partake in optional, extra-challenging levels, but Raskulls avoids repetition by mixing up your objectives. Getting to the end of each level is usually your ultimate goal, but certain restrictions flip your priorities around. In a time trial race, you only have to move as quickly as possible without looking back. But you often have three competitors right behind you, and these levels introduce Mario Kart-inspired items that inject a dose of unpredictability into the jump-and-bash races. Plus, you can attack your foes directly with your wand, pushing them backward while you sprint ahead. Another level type limits the number of zaps you can dole out from your wand, and this is one of the few times you need to carefully think about each move, lest you run out of energy. Other levels have you disarming bombs or causing toadstool houses to fall to the ground without getting smashed, and the threat of imminent failure at least keeps you focused intently on the events.

All of these different objectives are fun in their own right, but the utter simplicity makes it difficult to stay engaged. Level design rarely introduces anything unexpected so the stages blend together after a while. The only noteworthy elements are floating sections of water and lava, but it's not enough to make them consistently interesting. At least there is one standout objective that is not only good fun, but also gets your heart racing. In most levels, you can collect jars to build your frenzy meter, and once triggered, you run at warp speed. In the context of normal levels, this serves as a helpful boost but dissipates quickly, along with any thrills. Your goal in some stages is to maintain this breakneck speed from beginning to end, and it's the best part of Raskulls. Sprinting through levels as if your tail were on fire makes it easy to ignore the shallow shell surrounding the experience, forcing you to stay completely focused so you can land every jump and bust every block without slowing down for even a second. These levels show the full potential of Raskulls. You carve your path through these platforming levels, and it's so fast that it shows just how fun this game can be when the intensity is ratcheted up.

The single-player adventure can be finished in just a few hours, but there is a four-player mode (online or offline) that can extend your adventure for a little while. Competitive races are your only choice, and though the rules are identical to what you find in the main game, it's a little more fun when you're competing against friends. Causing blocks to tumble on the player behind you or unleashing a deadly weapon attack at a key moment elicits the kind of sadistic thrills commonly associated with competitive games, so even though there isn't much depth, it still can be intense and satisfying to come out on top. The biggest problem is that rubber banding is virtually built into the core gameplay. Levels are laid out with blocks standing in your path, and you have to zap them to progress. But when you have others trailing you, you're essentially clearing a path for them, which allows them to make up ground in a hurry. This ensures that races are very close because the people in last place don't have to worry about breaking as many blocks. It's an unfortunate side effect that limits any long-term appeal for this mode.

Raskulls is an enjoyable adventure that never quite reaches its potential. The block-busting mechanic is a neat idea that had the chance to transform a traditional platformer into something that was not only unique, but also darn fun. But the levels veer too far to the simple side, so you rarely have to put much thought or effort into plowing through to the end. There are some moments of pure joy, like the frantic frenzy stages, and the bonus levels pile on the difficulty, but the package ultimately lacks a hook that could have made it stand out from the crowd. Raskulls is a cute diversion, but it never lives up to its promise. 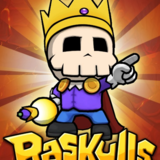