Shoehorning in the most basic of Wii motion-sensing controls doesn't make a clunky, repetitive game like Rampage fun--if anything, it just makes it more annoying.

The only thing more depressing than a remake of a classic game that isn't very good is a remake of a classic game that simultaneously isn't good on its own merits, and also manages to bring you to the realization that the classic game on which it's based isn't as good as you remember it being. Midway's Rampage series took arcades by storm back in the late '80s, providing players with the ability to storm through various metropolitan areas of the world and destroy them with gargantuan monsters. It was the kind of simplistic, button-mashy fun that could fly in a simpler time, a game designed specifically for mindless entertainment and to keep you inserting quarters. There hasn't been a new version of Rampage in half a decade, and after playing Rampage: Total Destruction, the newest installment in the series, it's not tough to see why. The problem is that the gameplay simply hasn't evolved over time. You wander around the same types of two-dimensional environments (though now they're in pseudo-3D), punching the same buildings and eating the same people that you did back in the '80s. Now, that style of gameplay simply feels punishingly repetitive, rather than goofy and fun. But whereas the PlayStation 2 and GameCube versions of Rampage that were released several months ago slavishly dedicated themselves to the same brand of repetitious button mashing that the arcade games did, the new Wii version tries to futz with the formula by adding in new motion-sensing controls. Unfortunately, these controls feel just as half-baked and irritating as the rest of the game.

The premise for Rampage: Total Destruction is as simplistic as any of the previous games to bear the name. Giant monsters roam from city to city, busting down every building that comes into their path so they can move onto the next block and do it all over again. Total Destruction toys with bringing in a bit of a plot to the proceedings, setting up the creation of the game's various monsters via a failed taste test of "Scum Soda," which mutates all its subjects horribly. But that story never extends beyond the opening cutscene and is completely secondary to you busting tall buildings as if they were chiffarobes or something. The three main monsters from the old games--George, Lizzie, and Ralph (a gigantic gorilla, lizard, and werewolf, respectively)--are on hand for this version, as well as a whole host of other monsters, like a Cyclops, a giant fishman, a giant squidman, a big rock thing, something that might be a jackalope, and others. However, no matter what monster you choose, you're basically playing the same character throughout. Each monster has a few specific stats that supposedly make them better for jumping, running, or smashing, but the tangibility of these differences is minimal at best, and the moves are the same across the board for every monster.

Those moves include, and are basically exclusive to, climbing up and punching, kicking, or stomping buildings, picking up and smashing cars, picking up and eating people, and a few special moves that can be earned as you spend more time playing as a specific monster. The basic controls for these moves are mostly mapped to the Wii Remote. You can pull off some stomps and smashes by smacking the remote up and down like a toddler with a toy hammer, and do wind-up punches by waving the remote back and forth as if you were trying to hail a cab. The A button handles basic punches, B jumps, and you move around the environment using the control stick on the Nunchuk. There are a few variances on the formula, like combining jumps and motions to make new attacks, but basically, you hammer, you wave, and you're bored. The attacks just aren't interesting, and the controls barely feel as though they tie in to the animations you're performing.

Each block has anywhere between four and 10 buildings to bust up, and all the while, cops, SWAT members, and military types will come after you with guns, helicopters, tanks, and the like. Apart from the occasional breaks you'll need to take to bust up the helicopters and tanks, there's really not anything more to the gameplay than simply breaking down buildings, moving to the next block, and repeating the process over and over again until you've destroyed the entire city. If the game gave you more attacks, or even more to do with the attacks you already have, it might be OK, but it doesn't. The 2D-plane environments give the game a constantly recycled feel. You don't feel like you're destroying a unique environment every time--you feel like you're destroying the same environment over and over again, because in effect, you are.

While the game really isn't much fun at all from a single-player perspective, there's enough multiplayer action to make things at least a tad more interesting. Up to two players can play the main campaign mode cooperatively, but there are also king-of-the-city and king-of-the-world modes available for up to four players. Both are basically the same thing as the main campaign, but with the specific goal of competing for the highest score. In any multiplayer arena, you can go up and attack fellow monsters to try to knock them off their game, but there's not much you can do save for punching in their general direction. No cool special attacks or anything for some good, old-fashioned monster-on-monster violence. Again, the multiplayer only adds a bit of distinction to the overall experience. It's just inherently more fun to destroy things with someone else in the room to help out. It doesn't make the gameplay any less repetitive or inevitably dull.

Graphically, Rampage on the Wii looks just marginally better than its GameCube counterpart. The game does a decent job of presenting itself, for what it's worth. The monsters look quite good. They animate well, move nicely in the context of the environments, and are creatively designed. The pseudo-3D environments also look nice enough. No high-res textures or special lighting effects are to be found, but the buildings break apart well, and things explode nicely. Again, the worst thing about it is that it basically looks like a GameCube game, with next to no added bells or whistles. The audio is a little more hit-and-miss. There are plenty of monstrous roars, thunderous smashes, and obnoxious belching, but it all repeats way, way too much. There just aren't enough sound effects to offset the amount of repetitive action going on, leading to constant and incessant repetition of the same annoying sounds. The soundtrack is pretty generic, though it generally jibes with the action pretty well. Voice acting is barely present, but what's there works well enough.

Perhaps the saddest thing about Total Destruction is its inclusion of the original Rampage and Rampage: World Tour arcade games as bonus extras. It's not sad because they're bad emulations of the original games; in fact, they're pretty spot-on. The problem is that being able to directly compare these ancient games to the new one, and seeing so little forward progress between the two, is just crushing. Not to mention that these old games simply don't hold up that well in this day and age.

The fact that Rampage: Total Destruction was already a pretty mediocre game to begin with means that a Wii version requires some serious revamping and widespread improvements to make it something worthwhile. No such luck, it seems. Yes, you can hammer the Wii control up and down to make with the smashing, but this act does exactly zero to make the game any more playable, or any less annoyingly repetitive. At best, Total Destruction is a brief distraction. At worst, it's an obsolete relic from too many years ago that now, on the Wii, seems even more antiquated and out of place. 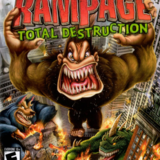 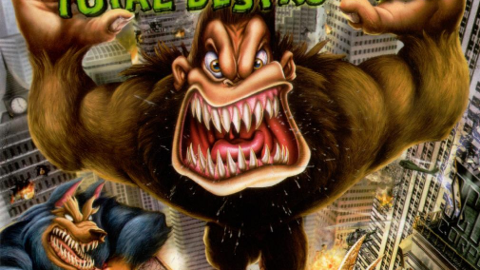 This latest installment of the classic arcade series offers up a wide array of playable monsters that have the ability to perform unique combo attacks and individual super moves.