Rampage 2: Universal Tour is, in fact, the third game in the Rampage series. However, it does so little to distinguish itself from last year's Rampage World Tour that calling it Rampage 2 is somehow fitting.

In World Tour, you chose to play as Ralph (a giant wolfman), George (King Kong incarnate), or Lizzy (a gigantic lizard), the same three characters who had appeared in the original 1986 arcade game, simply known as Rampage. Universal Tour's story opens shortly after World Tour ends: Our three heroes have been captured, separated from one another, and put on display for the world to see. But it seems as if the world simply can't stay safe. There's been yet another accident at Scumlabs International, and three more monsters have been created. Your choices at the beginning of the game are Curtis (a speedy mouse), Boris (the slow but strong rhino), and Ruby (a lobster with above-average skills all around). Your first mission in the game is to travel around the world, destroying cities and searching for George, Ralph, and Lizzy. After approximately 75 levels, you'll have all three of the original characters unlocked, which will start your second mission - stopping an alien invasion.

While there's plenty of levels in the game, they're all pretty interchangeable. Sometimes the buildings are a different color, or the layout of the building is different, but you still just pound all the buildings into dust, eat a few humans to keep your life up, and proceed. The larger cities (San Francisco or St. Louis, for example) have landmarks in the background that help a little bit to distinguish them from other cities, but since the landmarks are in the background, you can't interact with them at all.

The sound effects and music in Rampage 2 are pretty average. The entire soundscape is pretty muffled, and the music is an annoying and repetitive mix of bad guitar rock. Also, the screams of humans as they fall out of windows are enough to drive you insane after an hour or so. Graphically, the game is pale and dull, and looks about on par with what we've come to expect from sprite-based games on the N64. In comparison, the PlayStation version looks cleaner and contains more frames of animation.

Rampage World Tour didn't exactly set the world on fire, and Rampage 2: Universal Tour doesn't bring along enough lighter fluid to warrant picking it up. However, it is an easy game just to sit down in front of and play. If you feel left out because you passed on getting World Tour last year, or you've got young children in the house, or you're looking for a game to play mindlessly for hours at a time, this game is worth a quick rental. 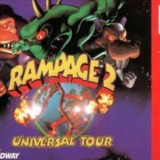